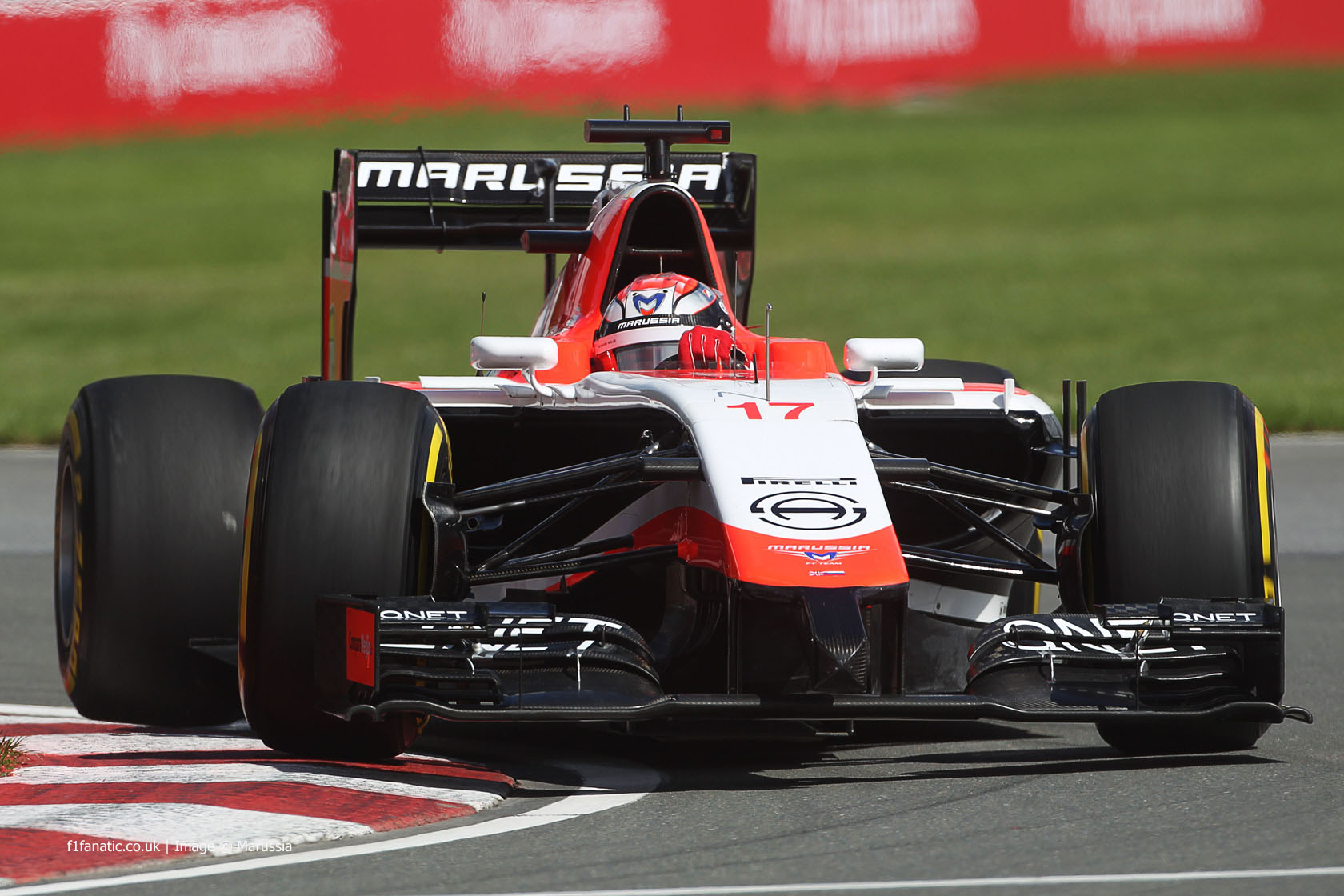 On day one of track action in Montreal Jules Bianchi fell foul of the track’s treacherous wall, while Jenson Button had a close encounter with the local wildlife.

Good morning @SChecoPerez no worry they are safe I do best transportation service😉 pic.twitter.com/623YhXGRFx

The polesitter has only won in Montreal 4 times out of the last 12 races, the lowest percentage on the entire #F1 calendar

Thermal cam on the Mercedes in the pits, would like to see it at speed! #F1 pic.twitter.com/sFNRWylLMp

Rossi locks up at the turn ten hairpin on his 12th lap in the Caterham. #F1 @AlexanderRossi @CaterhamF1 pic.twitter.com/hJhDHx0mTH

After his Monte-Carlo success, Jules Bianchi was the first victim of the Montreal walls, clipping the barriers at the exit of turn four.

Bianchi is moving again after this brush with the wall at turn four. #F1 pic.twitter.com/rvW4u7crJ6

Jules' car is up in the air for a thorough once-over to gauge the extent of the damage.

As much as good top speed is important, it is the acceleration from the hairpins that will minimise lap time rather than top end grunt

Jenson Button nearly ran over a bird, but they just managed to avoid each other.

A close encounter of the bird kind for @JensonButton who dodges one of his feathered friends. #F1 @McLarenF1 pic.twitter.com/wSIcpLt3fT

Awesome turn out for a Friday here in Montreal: fantastic support as always! Canada, you rock! #BestFans #F1 #FP2 pic.twitter.com/fcwGRmWGI4

Very odd goings on at Toro Rosso. Went to find out what was up with JEV in FP1 and was told boss had dictated no reason would be given.

Don't want to read too much into it but note Rosberg is referring to Hamilton as "my team mate" again. Don't think anyone else does that.

Komatsu to Grosjean: "We will box this lap. We have a high gearbox temperature so we will not go out again." #F1

Hamilton is, and always has been fast in Montreal. Uphill challenge for Rosberg this weekend, you fancy.

Something still wrong with @LewisHamilton 's eyes? Doctor has just put drops into them…

Walking a trackside path road barely wide enough for me when this appears #f1 pic.twitter.com/2V6VmPeAss

Saw Lewis Hamilton and Nico Rosberg chatting with each other on way to drivers' briefing tonight. Relations definitely better than Monaco

Such a awesome track here in Montréal! Had a productive afternoon and ended up P19. #F1 #M4X pic.twitter.com/lB6LTu4y0T

New friends everywhere. Love this race. @benjhunt has found a few new fans tonight in Canada. F1 thriving in this part of the world :)

One comment on “2014 Canadian Grand Prix Friday in Tweets”