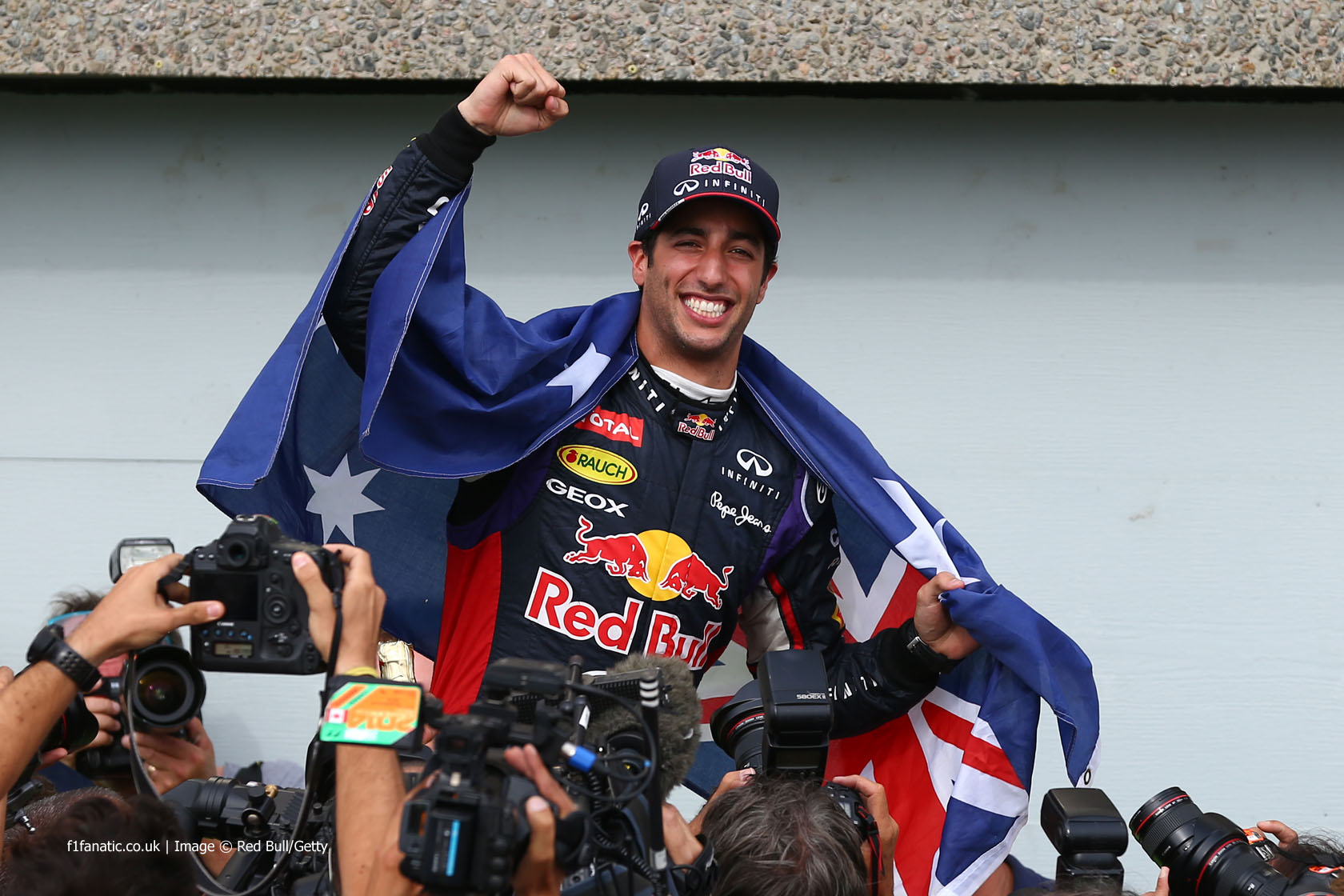 Daniel Ricciardo became the 105th driver to win a round of the world championship with his surprise victory in the Canadian Grand Prix.

Less than three weeks after the Australian racing community was saddened by the death of Jack Brabham, the three-times world champion and first Australian to win in F1, Ricciardo became their fourth race-winner.

The 24-year-old scored his first race win at his 57th attempt, seven races into his first season with Red Bull. He is the first new race winner since Pastor Maldonado in the 2012 Spanish Grand Prix.

The Red Bull driver’s last victory in any category came at Monaco in Formula Renault 3.5 three years ago. The following month it was confirmed he would make his F1 debut driving for HRT in the British Grand Prix.

MGU-K failures on both brought several of Mercedes’ dominant streaks to an end. When Felipe Massa took the lead on lap 46 it was the first time since Sebastian Vettel won last year’s Brazilian Grand Prix that anything other than a Mercedes had led a race.

The two W05s had led for 413 laps in a row at the start of the season. That’s the longest consecutive spell led by a single team since 1993, when Williams led throughout the Canadian, French, British, German, Hungarian, Belgian and Italian Grands Prix, for a total of 419 laps.

The only longer leader spell achieved by a team was recorded by McLaren in 1988, who led all of the first seven races, totalling 477 laps.

Mercedes also failed in their attempt to score one-twos in six consecutive F1 championship races, something which has never been done before. However in 1952 Ferrari finished first and second in six consecutive rounds which counted towards the championship, leaving aside the Indy 500 which was not run to F1 rules (and which Ferrari did enter, Alberto Ascari retiring on lap 40).

Nico Rosberg kept Mercedes’ run of pole positions going with their seventh, which was also the seventh of his career. He now has as many pole positions as Jacques Laffite.

Ricciardo’s win also ended the monopoly on race wins by Rosberg, Lewis Hamilton and Sebastian Vettel, who had won all of the preceding 20 races in a period spanning more than a year. Fastest lap went to Felipe Massa for the first time since the 2011 Hungarian Grand Prix. The last Williams driver to set fastest lap was Bruno Senna in the 2012 Belgian Grand Prix. Controversially, Rosberg set his fastest lap of the race by cutting the chicane on lap 25.

The Williams pair took fourth and fifth on the grid, which was the team’s best combined qualifying performance since the 2010 Brazilian Grand Prix, when Nico Hulkenberg qualified on pole position and Rubens Barrichello lined up sixth.

While Ferrari marked Kimi Raikkonen’s 200th ‘race start’, it was in fact his 199th. Raikkonen has participated in 201 grands prix, but withdrew before the start of the 2005 United States Grand Prix as did all the other drivers on Michelin tyres. And although he took part in the original start of the 2001 Belgian Grand Prix, that race was later abandoned due to a red flag, and Raikkonen did not take part in the new race.

Finally, Max Chilton’s record of being classified in every race he had started finally came to an end following his first-lap collision with team mate Jules Bianchi. Chilton was classified in his first 25 starts, beating the previous record of 16 set by Tiago Monteiro in 2005.

Spotted any other interesting stats and facts from the Canadian Grand Prix? Share them in the comments.