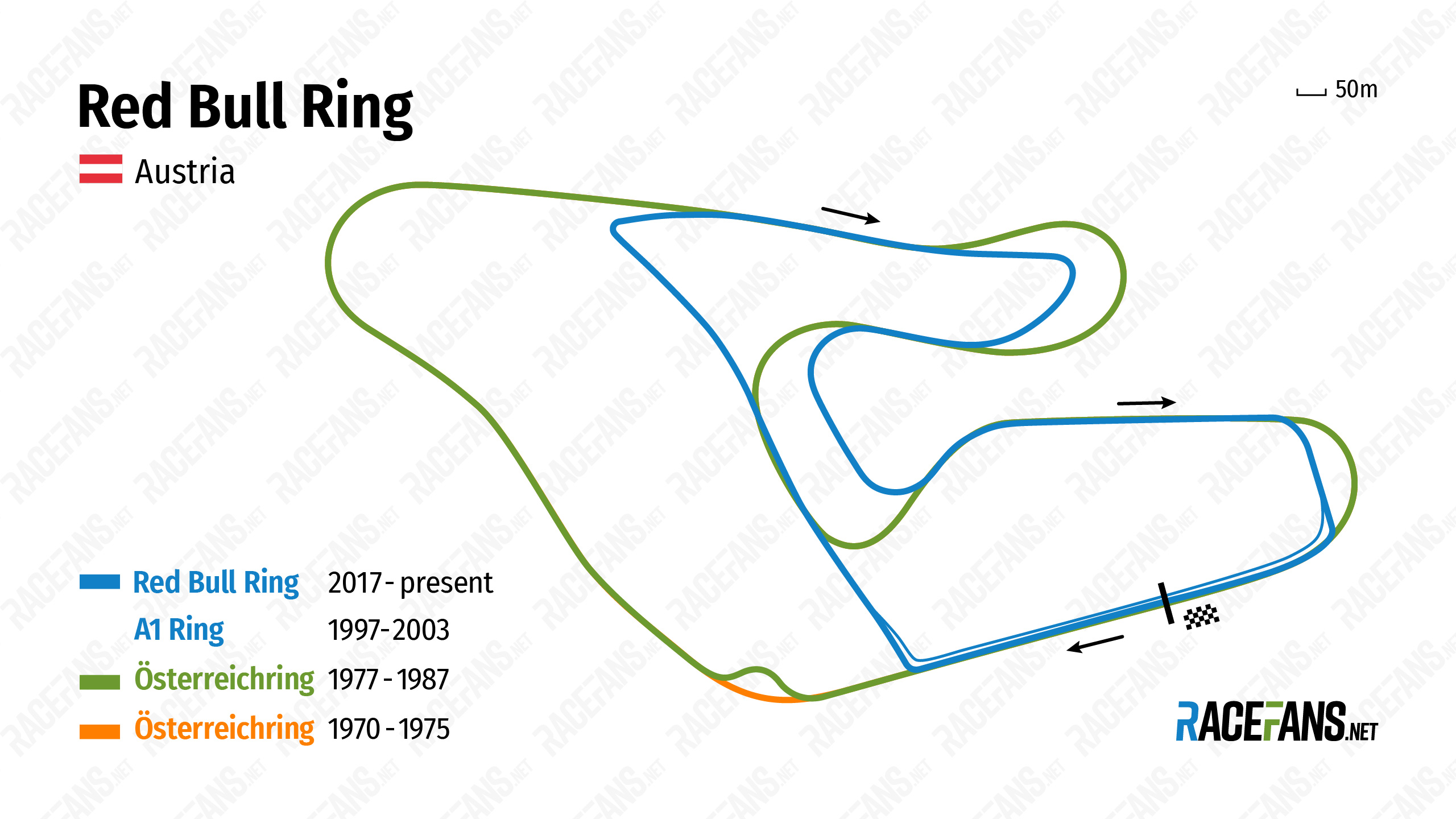 The circuit originally known as the Osterreiching was the first F1 track to be overhauled by Hermann Tilke, whose designs have become almost ubiquitous since.

It was renamed the A1-Ring when Tilke’s new version was used for the first time in 1997. It’s back on the calendar once more – and now it’s called the Red Bull Ring.

Today’s track is markedly different to its original incarnation. Here’s how the Osterreichring got a facelift.

Austria’s first world championship event was held in 1964 at Zeltwet. But the bumpy, four-turn circuit was not well-liked, and so a new circuit was built a short distance away.

Taking advantage of the rolling Austrian countryside, the Osterreichring blended gradient with fast, open corners to produce one of the fastest layouts in use at the time. And after the additions of chicanes to Monza and Silvestone, the daunting Osterreiching gained the distinction of being F1’s fastest track.

That remained the case despite changes to the start of the lap. The first corner was eased in 1976, then transformed into the Hella-Licht S in 1977.

The circuit remained on the calendar until 1987, by which time some of its shortcomings were becoming apparent. Particularly the narrow start/finish area, where two crashes during that final meeting meant it took three attempts to get the race started.

McLaren driver Stefan Johansson also criticised the organisers after he struck a deer at over 150mph during practice. The organisers had allowed the session to continue despite the animal being spotted in the vicinity of the track long before he hit it, killing the deer, wrecking the McLaren but fortunately leaving Johansson unhurt.

Ten years later F1 returned to a track where little had been left as it was, including the name: Austrian Telecommunications company A1 had rebranded it.

The shortened circuit and its slower corners may have had little in common with its predecessor, but it met the FIA’s ever-increasing safety requirements. And, thanks in part to its simple layout and many straights, it tended to produce exciting races.

It did, however, exhibit one of the problems which other modern circuits have been afflicted by. Its run-off areas were so wide and so forgiving that drivers could often run far off the track to gain an advantage – particularly at the first corner.

The A1-Ring held its last F1 race in 2003. In the intervening period, Red Bull purchased the circuit and it began holding major races again, including a round of the DTM.

No changes have been made to the track layout since F1 last raced on it 11 years ago. It is the third-shortest track on this year’s calendar, just 17 metres longer than Interlagos.

And it is likely to have one of the shortest lap times. The lap record set during the 2003 event by Michael Schumacher was 1’08.337 (refuelling was still permitted) and the fastest lap of the entire weekend was Schumacher’s 1’07.908.