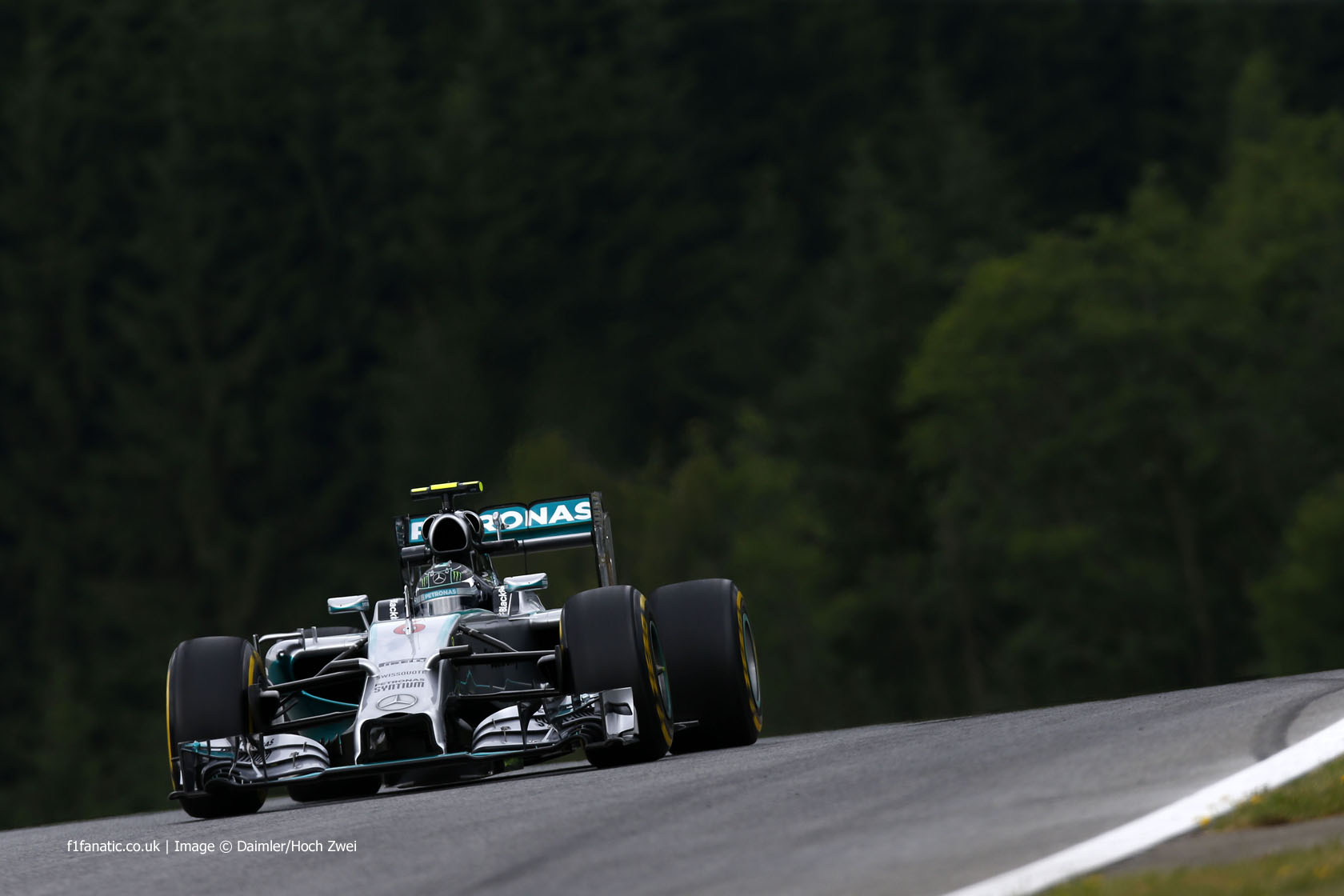 A surprising qualifying session has set up two fascinating storylines for the Austrian Grand Prix, both of which revolve around Nico Rosberg.

Starting third on the grid behind the two Williams drivers, Rosberg is Mercedes’ best hope to get in among them and challenge for victory.

But at the same time Rosberg’s championship aspirations require him to keep one eye fixed on his rear-view mirror to watch out for Lewis Hamilton. He will be out to stop his team mate from extending his point lead for the third race in a row.

Rosberg’s best chance of extending his advantage over Hamilton is to do what his team mate did in China – make use of the traffic between him and the other Mercedes to build up a lead.

But before he can do that he’s going to need to pass the two Williams drivers. That won’t necessarily be straightforward, as they have been among the best starters in the field this year.

What’s more the Williams drivers have the same Mercedes engines and have been hitting the highest top speeds (see below). If he can’t clear them at the start, Rosberg may have to wait until later in the race, when the Mercedes’ superior tyre performance come into play.

The long straights of the first two sectors at the Red Bull Ring should invite plenty of opportunities for overtaking at the start. That will be especially vital for Hamilton as he tries to bring his team mate back in range after his disastrous run in Q3.

“The shot for the win will be very hard,” he admitted after failing to set a time in the top ten shoot-out, “so I guess it’s mainly a case of damage limitation”. Valtteri Bottas is aware that it’s over the longer runs that Williams are most vulnerable to Mercedes.

“I think both of us, me and Felipe, we really need to just try and do the best we can, try and go as forward as possible after the first corner and the first lap and keep the position as long as possible,” he said after qualifying.

“We know that Mercedes’ race pace is going to be really really strong so it’s not going to be an easy day tomorrow but we will do our best.”

Tomorrow is expected to be the warmest day of the weekend so far, with air temperatures exceeding 25C. Given that, some drivers set up their cars with more of an eye on qualifying that the race – including Rosberg, who said he’s “worked more for the race” and not expected his car to be as difficult to handle in qualifying.

“Two stops is expected to be the most likely strategy,” said Pirelli motorsport director Paul Hembery, “but just as was the case in Canada some teams might try a one-stopper, depending on factors such as safety cars”.

As usual the ‘top ten tyre rule’ has failed to produce any variation in strategy between the front runners and everyone in the first five rows will start on the super-soft tyre. But one driver who made the other tyre work well in the last round was Jenson Button, who is the first driver on the grid with a free choice of compound.

“Being outside the top ten, we can run new tyres at the start of the race, and we can play with the strategy,” he said. It wouldn’t be a surprise to see Button try to bring himself into contention by starting on the soft tyre.

A significant factor in tomorrow’s race will be how easy overtaking is, particularly with the addition of two DRS zones on a track where overtaking has been easier than at other venues.

“The DRS zones look interesting,” said Button. “Not having one at the exit of turn one looks like it’ll make racing more fun – now, you’ll have to make a move to overtake rather than just passing along the straights, which is what it should be about.”

Track limits remained a talking point during qualifying, with half the drivers having at least one of their lap times disallowed after running wide at turn eight. Expect to see the stewards wielding penalties against those who do the same in the race.

“Turn eight is tough in terms of track limits,” said Esteban Gutierrez, who was among the drivers to lose a lap.

“We did not have the penalty for exceeding the limits on Friday, but today and also for the race we will have it. When you push and get into the corner with a higher speed, it is a risk to go out of the track’s limits.”

Can Williams keep the Mercedes drivers at bay – or will they be content to settle for their first podium of the year? And will Hamilton stop Rosberg adding to his points lead?