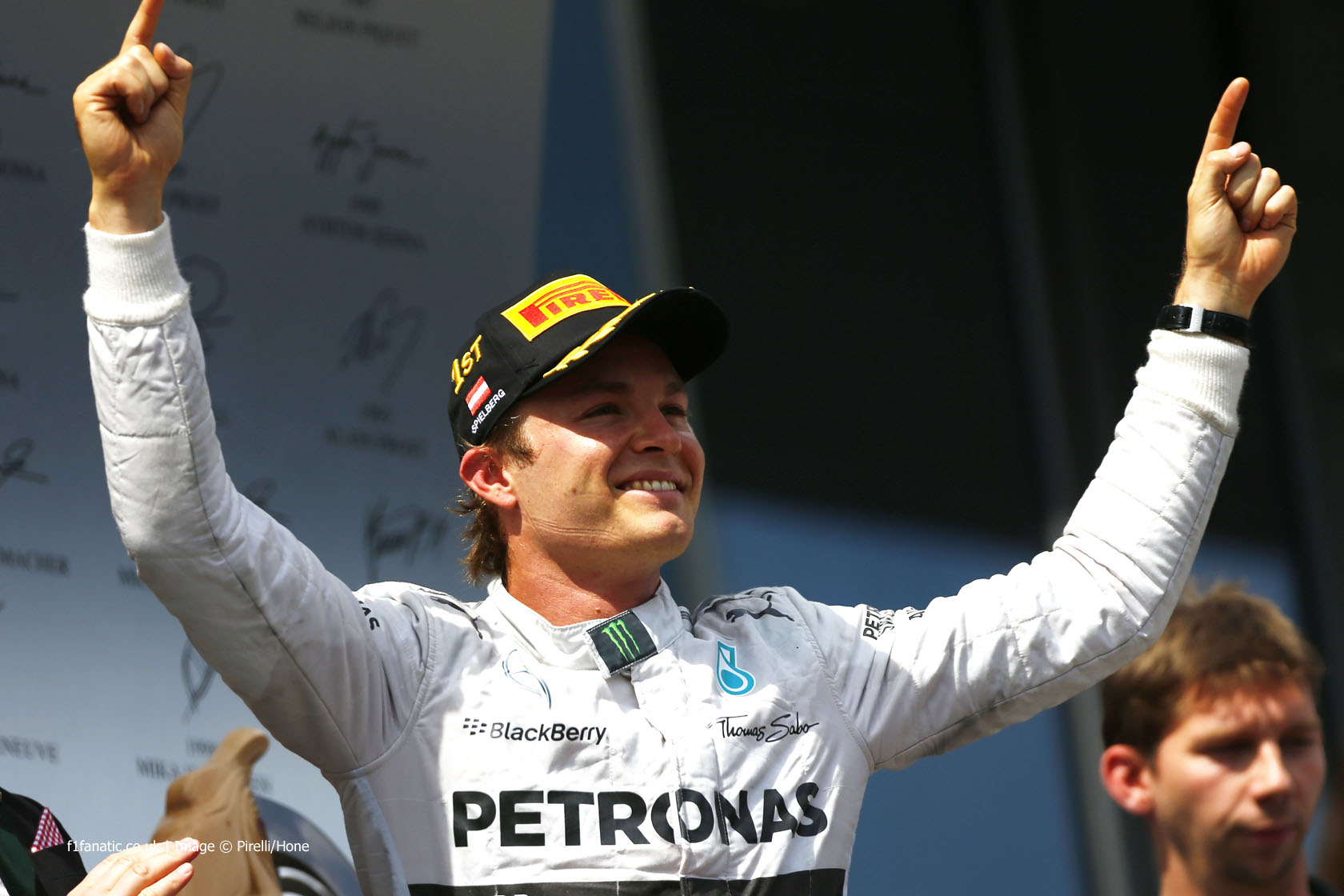 Nico Rosberg’s third win of the year in the Austrian Grand Prix meant he extended his points lead over Lewis Hamilton for the third race in a row.

Having started ninth Hamilton did all he could to finish on his team mate’s tail, but he was unable to stop Rosberg increasing his lead to a new high of 29 points.

The pair overcame the Williams duo of Felipe Massa and Valtteri Bottas, who locked out the front row of the grid but were shuffled behind their faster rivals during the pit stops. Whatever Hamilton imagined the best-case scenario was for the end of lap one, being one second behind his team mate in fourth place had to be up there. From the fifth row of the grid he gained two places on the run to turn one, then picked off Kevin Magnussen on the climb to the second corner.

He got close to Fernando Alonso at turn two but fortunately the Ferrari driver saw him coming and didn’t hug the apex of the corner. When they reached turned six Alonso understeered slightly wide and Hamilton pounced, making an unlikely pass on the way into turn eight.

So as the second lap began the Williams pair held the lead in front of the two Mercedes. Rosberg had briefly demoted Bottas at turn one but the Williams reversed the move on the run to turn two. “I thought I would get Valtteri at the start and I did,” said Rosberg, “but then they’re quick on the straights and he just went flying straight by me again.”

With Bottas nudging 320kph on the straights Rosberg had to hold position behind him for the rest of the first stint. Hamilton in turn maintained a watching brief behind his team mate, both expecting the strategies to turn events in their favour.

Vettel out of luck again

Meanwhile Red Bull’s home race had got off to a conspicuously poor start. The run-off at turn one used to be a vast, inviting expanse of tarmac – now it is bordered by a high kerb, and that caught out Daniel Ricciardo on the first lap, dropping him from fifth to ninth.

Then on the second lap Sebastian Vettel was struck down by an engine fault – the latest in a series of technical failures he’s endured this year.

He was initially told to switch the engine off as the field came back around to catch him and he even came to a stop on the run to turn three. Buut the Renault Energy F1 power unit came back to life and he was swiftly back up to speed.

This presented the problem of where to blend in with the field as it came by. He hugged the apex of turn three just as Ricciardo was passing by and, though his team mate had been warned about Vettel’s problem, Ricciardo ran wide into the gravel which allowed Daniil Kvyat to pass him. As the lead Mercedes driver, Rosberg had the first call on strategy and he duly peeled off into the pits on the tenth lap of 71. Williams, playing a cautious game, did not respond with Massa for another three laps, and Bottas stayed out for another two.

That effectively handed the lead to Rosberg and gave him a temporary bulwark against Hamilton, though only one of the Williams drivers stayed between them for long. When Massa came out of the pits ahead of the second Mercedes, Hamilton launched himself down the inside at turn two from seemingly impossible range and mugged Massa for the position.

However he was unable to do the same when Bottas emerged in front of him two laps later. It didn’t help matters that his complete pit stop had been three-quarters of a second slower than Rosberg’s.

But Rosberg wasn’t able to make his escape at this stage. While the leaders had been quick to get rid of the super-soft tyres they’d begun the race on, Sergio Perez had started 15th on softs and wouldn’t change them until lap 29 – twice as long as most of the front-runners had gone.

Perez held his position and Rosberg bided his time, waiting for the Force India driver to inevitably hit ‘the cliff’. Bottas, Hamilton and Massa queued up behind him, with the other Mercedes becoming increasingly concerned about his brakes.

“Going into the race I wasn’t aware that we had a brake problem, so it was news to me when we started to speak to me about it,” said Hamilton after the race.

This wasn’t a repeat of the circumstances which put him out of the Canadian Grand Prix two weeks earlier, but a problem cooling the front brakes. Hamilton was advised Rosberg had a similar problem, but as in Canada the fact Hamilton was further back in the queue exacerbated his dilemma.

Perez offered little resistance to Rosberg when his tyres began to fade. On lap 26 the Mercedes dived past at turn two and Bottas smartly followed him through, losing no time. Hamilton had to wait until they came around to the same corner again before demoting the Force India.

Massa did not get stuck in so readily, perhaps mindful of his last-lap collision with Perez in Canada and the war of words between the pair which dragged on into this weekend. The Force India driver pitted on the next lap anyway, elevating the pole sitter to fourth place.

This was the cue for Rosberg to make good his mistake and pull away from Hamilton while they had a Williams between them. But he stumbled, running wide at turn one on lap 30, and suddenly Bottas, 3kph quicker in a straight line, was putting him on the defensive.

Rosberg got his head down and by lap 37 had his lead over Bottas back up to the 1.7s it had been when he made his mistake. He added four tenths more before heading into the pits.

This time Williams responded right away – Bottas on the next lap and Massa the lap after that. But with Hamilton having pitted two laps before Rosberg, Williams were too late to save Bottas’s second place.

Hamilton had another sub-par stop, losing nearly nine tenths to Rosberg. Although it got him ahead of Bottas, Hamilton began his final stint two seconds down on Rosberg, and still worrying about his brake wear.

As the laps ticked down Hamilton began to nick a tenth here and there off Rosberg. Pulling out of turn two on the final lap Hamilton finally got to use his DRS flap against Rosberg, and his team mate locked up at the next corner, running wide. But he was safe through the final turns, and as Hamilton backed off at the flag Rosberg crossed the line 1.9 seconds clear. Behind them Bottas held on to third while Massa, nursing his tyres in the final laps, kept a wary eye on Fernando Alonso’s fifth-placed Ferrari in his mirrors.

Perez’s alternative strategy allowed him to pass Kevin Magnussen in the final stint, and a last-lap pass by Ricciardo on Nico Hulkenbegr salvaged a small amount of pride for Red Bull.

Weighed against that was the fact that the other Red Bull had been voluntarily retired to save its engine after Vettel had damaged his front wing while trying to pass Esteban Gutierrez. And both Toro Rossos were sidelined with further maladies.

Kimi Raikkonen was warned mid-race about using the run-off at turn eight but kept it clean from then on to pick up the final point.

Rosberg’s third win of the season means the Mercedes drivers head to Hamilton’s home race certain that whatever happens they will leave it with Rosberg ahead in the points.

Despite a stellar first lap Hamilton, by his own admission, never got into a position where he could attack Rosberg. His failure to get the job done on Saturday compromised his race on Sunday, which in many ways has been the story of the last three races.