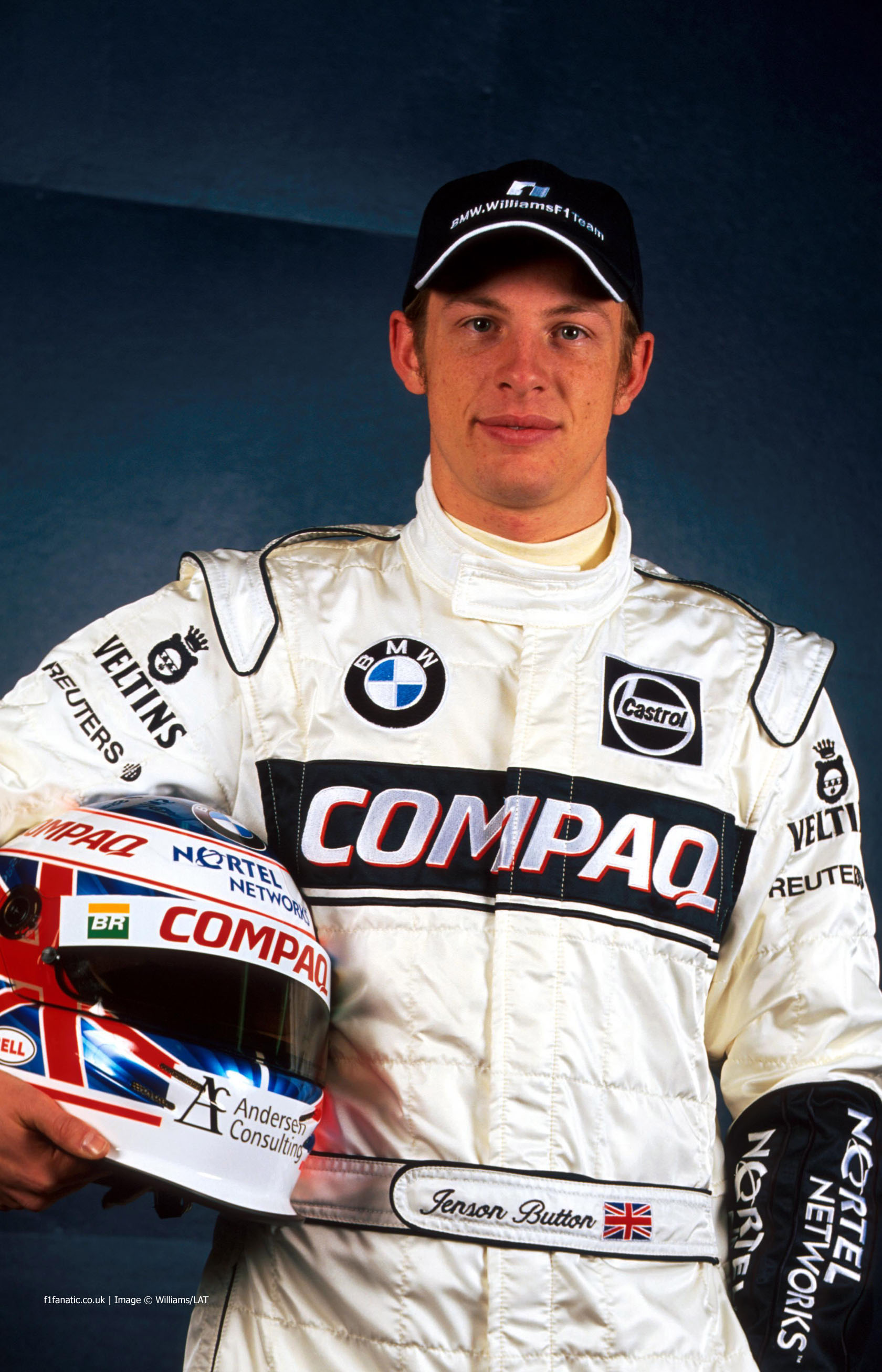 One year before Kimi Raikkonen astonished the F1 paddock by arriving in the sport with only 23 race starts to his name, another driver made headlines for gaining a rapid promotion to the sport’s top flight.

Jenson Button had only been out of karting for two seasons when he made his grand prix debut. He went on to become the youngest driver to score a point in F1 (a record he has since lost), and 14 years on he is a world champion and the most experienced driver on the grid.

However the man who did most to propel Button to the pinnacle of motor racing, his father John, tragically passed away in January.

John Button was well-known on the British racing scene before his son came along, having campaigned a Volkswagen Beetle at rallycross events. Jenson was born in 1980, and his path into racing was set when John purchased a second-hand kart from his rival and friend Keith Ripp.

The fast Clay Pigeon kart circuit in Dorset was one of the closest venues to Button’s home in Frome, Somerset. It rained on his first visit there for a race and, in a performance that would become familiar from his Formula One career, the rookie stunned onlookers by winning first time out. The unassuming youngest suspected his victory was a fluke, while in true ‘karting dad’ fashion his father earned the wrath of the stewards by running onto the course to celebrate.

John threw his weight behind his son’s fledgling career, acting as PR agent, mechanic and manager. His engine-tuning skills also attracted business from the fathers of other young stars of the future including Anthony and Lewis Hamilton.

This early footage of Button’s karting career shows his father coming to the defence of his heartbroken son after a controversial disqualification:

Better things lay ahead of both of them. Jenson took his first major karting title in 1990, crowned British Cadet champion, and he repeated the feat in 1991 with the incredible record of winning every single one of the 34 races staged. He was British Open champion too that year, and in 1992 he added the Junior TKM title to his rapidly growing collection of trophies.

Button’s achievements would outstrip those of his immediate competitors in the championship, which included several future stars of motor racing such as multiple Indianapolis 500 winner and IndyCar champion Dan Wheldon, and F1 drivers Justin Wilson and Anthony Davidson.

One of the most intense battles between the quartet occured on Button’s home circuit in 1989, where he eventually defeated Wheldon in the final:

With his growing success came the pressure of being ‘the one to beat’. The 14-year-old’s 1994 championship campaign went off the rails when a series of mistakes cost him the British Junior series title which he had been leading comfortably.

He made amends the following year when he moved up Europe-wide competition and claimed the Senior ICA crown with twice the points of his nearest rival. It also led to one of Europe’s top karting teams, GKS (the de facto factory team of kart manufacturer Tecno-Rotax) calling on his services in the Formula A championship.

He fought out a tough season with Brazil’s Gastao Fraguas and Finn Kimmo Liimatainen, with all three arriving at the Valence circuit for the championship finale in with a chance of winning the title. Button (number 189) led early on but slipped to second place at the flag, yet at 15 was was the youngest driver ever to have finished so high:

Button spread his wings even further in 1996, placing third in the karting world cup and the American kart series. His next step was ‘the Formula One of karting’ – Formula Super A, where the budget required was similar to what he would spend the following year racing in Formula Ford.

Although Button’s driving style in F1 earned him comparisons with Alain Prost, in 1997 he was awarded the Ayrton Senna Memorial Cup, awarded partly based on the views of Senna’s family, after a stunning drive from 18th to 2nd at Suzuka in the pre-final. He retired from the actual final with a broken chain while battling for the lead.

The time had finally come for Button to move into full-blown racing cars. And when he did so the winning didn’t stop: nine victories at the wheel of his Haywood Racing-run Mygale brought him the British Formula Ford title. Here he is in action at Brands Hatch – still racing against Wheldon:

Button was now managed by David Robertson, who would later mastermind Raikkonen’s even more rapid ascent to F1, and backed by photographer Keith Sutton, who had worked with a young Senna during his climb up the British single-seater ladder 15 years earlier.

Sutton obtained a pass for Button to the 1998 Spanish grand prix, courtesy of Bernie Ecclestone. An introduction to Frank Williams would prove timely, as his driver Alessandro Zanardi’s comeback to Formula One was not going according to plan.

Button rounded off 1998 with victory in the Brands Hatch Formula Ford Festival which also helped him towards the 1998 BRDC Autosport Award – which earned him an F1 test.

He went into the British Formula Three championship in 1999 with two factors against him: pre-season favourites Luciano Burti and Marc Hynes were entering their second season at this level, and they like most of Button’s rivals were using Mugen-Honda engines.

There were doubts over the competitiveness of the Renault engines used by Button’s Promatecme team, and he was the only driver to win a race with them all season. He did so three times, after signalling his potential with a debut pole position at a rain-hit Donington Park.

He also claimed pole position on his first visit to Spa-Francorchamps and ended the year third overall and top rookie. At the prestigious Macau race at the end of the year he came in second to Darren Manning.

Manwhile Button’s management had been fielding enquiries from curious F1 teams. Robertson received an offer from McLaren, “but I didn’t like the terms and we turned it down”, he said in 2004. “Stewart was the same basically ‘we want to own you’ and these terms were not satisfactory either.”

However Button took the chance to test for multiple F1 champion Alain Prost’s struggling team. He offered Button the run in an AP02 chassis at the Circuit de Catalunya without insisting on having tthe first call on Button’s service should he suitably them.

And impress them he did. After regular driver Jean Alesi set a benchmark time of 1’14.8 Button posted a best of 1’14.4 just 11 laps into his run.

“We thought ‘Bloody hell, who is this guy?'” recalled Prost’s lead engineer Humphrey Corbett. “He wasn’t flustered, he was so relaxed and his feedback was very good. It was as if the guy had been driving F1 for five years.”

Meanwhile circumstances at Williams had turned in Button’s favour. The team had parted ways with Zanardi, and an opportunity to race one of their new BMW-powered cars was now on the cards.

Six days before his 20th birthday, Button tested for the team at Jerez. BMW competition manager and multiple grand prix winner Gerhard Berger was impressed by Button’s form. But in order to judge whether he or the more experienced Bruno Junqueira should get the race seat a shoot-out test between the two was arranged at the Circuit de Catalunya.

Williams cut it fine. On the day their line-up was due to be announced the decisions still hadn’t been made, and two different versions of the press information kits were produced to cover the possible outcomes.

With the media already assembling. Button’s phone rang. Ten minutes later, the press kits were distributed naming Ralf Schumacher and Jenson Button as the team’s drivers for the 2000 season.

Having ascended the young driver ladder with remarkable speed, Button had to wait for his first podium finish, first victory and finally, in 2009, his world championship victory. But his father John remained his staunchest supporter and became a familiar face to F1 fans in Britain and beyond.

Following his sad death earlier this year his current team McLaren have created a special T-shirt for fans to commemorate him at this weekend’s British Grand Prix. Some of the proceeds from the sale of the shirt will be donated to the Henry Surtees Foundation. See McLaren’s website for more information.