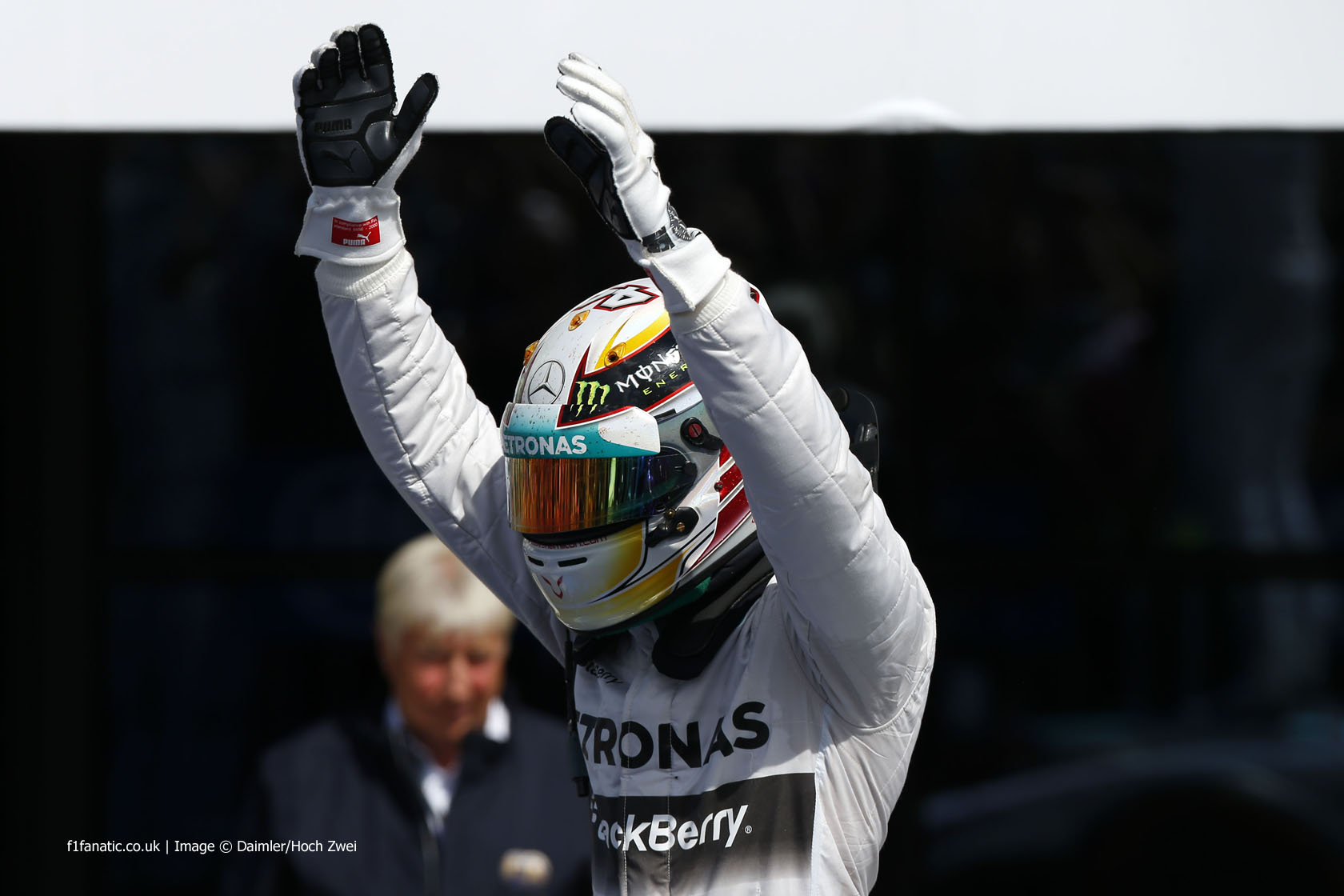 The British Grand Prix was poised to offer up another of this season’s intense showdowns between Lewis Hamilton and Nico Rosberg.

But just as Hamilton was poised to bring serious pressure on his team mate, the latest of Mercedes’ technical problems struck down one of their drivers’ cars.

While Hamilton bore the brunt of their technical woes in Austrlia and Canada, this time Rosberg was the one who suffered. And though it put the outcome of the race beyond doubt, it has left us with a finely-poised championship battle. The race began with a brief flurry of action, following which the track fell silent for over an hour. A brutal accident befell Kimi Raikkonen on the first lap, and though he was unhurt substantial damage was done to a barrier in containing the crash, which took over an hour to repair.

Striving to make gains from a lowly starting position of 18th, Raikkonen had gone off at Aintree, the fast left-hander which feeds the cars onto the Wellington straight. He kept his foot down as he hurtled along the smooth run-off, but missed the section where it joined to the tarmac, instead bouncing across the grass at high speed.

Just when it looked as though he’d straightened the Ferrari up it snapped away from him, heading towards a metal barrier at unabated speed.

“I must have hit a kerb – I then lost control of the car and ended in the barriers,” was Raikkonen’s typically unruffled assessment. His car bounced back into the path of the remaining cars, causing consternation behind.

Felipe Massa, unsighted behind Kamui Kobayashi’s Caterham, saw Raikkonen’s car at the last possible moment. His Williams spun into the Ferrari but if he hadn’t reacted so quickly the consequences could have been horrendous.

“Kimi came across the track and I never really had a chance to miss him, and sadly the damage was too much to continue,” said Massa. “Luckily I turned as it could have been a worse accident.”

But perhaps no one was luckier than Max Chilton, whose car was struck by Raikkonen’s flying wheel. It wrecked his suspension, but mercifully missed his head.

He headed for the pits in his damaged car, but as he did the race was red-flagged, meaning he couldn’t come in. The team were unable to radio him, and the consequences for his race were disastrous. As well as being handed a drive-through penalty he was not able to join the other cars when the Safety Car pulled away, meaning he immediately fell a lap down.

Hamilton on the attack Once, when it was more common to see races red-flagged on the first lap, the procedure was for a new race and a fresh start to be called, giving drivers a chance to get in their spare cars. But with spare cars long a thing of the past, the race resumed behind the Safety Car as usual.

Rosberg executed a perfect restart and was a second and a half clear of Jenson Button when the race finally got going again. Behind them were their team mates, who swapped places on lap three as Hamilton easily dispensed with Kevin Magnussen.

By the end of lap four Hamilton had Button in his mirrors, and it was business as usual at the front for the two Mercedes. But with Rosberg already five seconds ahead Hamilton needed to find a way to cut into his team mate’s lead.

At first he couldn’t: by lap nine Rosberg had pulled almost another second clear. But after that Hamilton began hacking away at Rosberg’s lead with a remorseless regularity. Each time they came by Hamilton had taken another few tenths. He halved Rosberg’s advantage in eight laps.

The pair forced such a rapid pace that the proximity of their rivals quickly ceased to be a factor in their pit stop plans. Rosberg was in on lap 18 and – for the first time this year – Mercedes produced the quickest complete pit stop of the race.

But in a repeat of Austria Hamilton lost almost a second to his team mate in the pits – a costly waste of his hard-won gains, though he told his pit crew on the radio not to worry about it. Having switched to the hard tyres, while Rosberg took another set of mediums, Hamilton then proceeded to reclaim all that lost time on his first flying lap. Rosberg, however, was in trouble. Shortly before his first pit stop he’d reported a problem with the down-shift on his gearbox, and had been given some tips on how to fix it. Now a more serious problem with the up-shift had developed.

In Canada Rosberg demonstrated great mechanical sympathy by bringing his car home in second place despite a serious loss of performance. He urged his team to find any way of getting his car to the chequered flag so he could salvage some points, but eventually he had to park up, accept the inevitable, and spare the engine further exertion.

“I tried to get it into some safety settings, let Lewis through and just keep going until the end of the race,” he said. “But there was nothing we could do so I had to stop the car.”

As Rosberg climbed out of his car at Becketts, Hamilton was already backing off, taking care not to over-exert his W05. Taking his place in second was – surprisingly – Valtteri Bottas.

The Williams driver had avoided the pile-up at the start and then took on a fresh set of medium tyres on the grid. He then passed car after car – including both similarly Mercedes-powered McLarens – as he staked his claim to a second podium finish in a row.

Bottas temporarily relinquished his advantage on lap 31 by pitting. That promoted Sebastian Vettel, who had made a poor start from the front row and lost more ground after trying unsuccessfully to hold Hamilton back at the first corner.

Vettel, however, had made a very early tyre change on lap ten, and he couldn’t make it to the end of the race without a further pit stop. This he did on lap 33 – and he emerged just as Fernando Alonso was arriving on the start/finish straight.

Alonso immediately went on the attack, lining Vettel up at the exit of Luffield and claiming the outside line for Copse. The Ferrari nosed ahead as they reached the entry of one of F1’s quickest corners. Alonso, unhesitating, swung in and claimed the position, leaving Vettel with little option other than to back off.

Vettel and Alonso thrill in battle His team mate’s accident had allowed Alonso to discard his hard tyres after a single lap and spend the rest of the race on the faster medium compound. But he had also been given a five-second penalty after stopping on the grid well in front of his slot, so after racing his way past several cars in the opening lap Alonso’s progressed had been checked.

Now he applied the same brake to Vettel’s gains, and the pair treated the crowd to a no-holds-barred tussle which lasted a dozen glorious laps.

As usual the Red Bull’s poor straight line speed was a handicap for Vettel. But Alonso also reported problems with his rear wing and power unit. Nonetheless he he mounted a robust defence from Vettel, frustrating his rival by dawdling in the slow corners.

Vettel proved Alonso’s defences at Brooklands, trying more than once to get around the outside of the Ferrari, and each time being obliged to back down or visit the run-off area. Vettel took exception to Alonso’s tactics, and said as much on the radio.

Both gave as good as they got when it came to remonstrating with their pitwall – with the race director able to hear every word. Alonso’s furious complaints were calmly reiterated by Andrea Stella for Charlie Whiting’s full benefit, while towards the end of their fight Vettel acknowledged his rival’s continuing abuse of the track limits by merely saying “and another one”.

Earlier in the race Alonso had been shown the black-and-white ‘unsportsmanlike driving’ flag for failing to stay within the track boundaries. Perhaps reasoning that if the worst race control were going to do was wave a flag at him he might a well get in on the act, Vettel also ventured beyond the limits of the track.

In Alonso’s view, and to his intense irritation, it was that which eventually set up Vettel’s successful move by allowing him to gain the benefit of DRS on the way to Brooklands. He then prised open a gap down the inside of Alonso from the exit of Luffield and dived down the inside at Copse – taking care not to run wide there as well.

And, of course, both were back on the radio complaining about each other once the fight was settled. It may have looked great, but the pair hadn’t covered themselves in glory with their tattle-tale communications.

Behind them Magnussen claimed seventh ahead of Nico Hulkenberg, the Force India driver finding his car was too easily destabilised by gusts of wind. The Toro Rosso drivers drew a line under a series of unfortunate races with a double points finish.

Jean-Eric Vergne had tangled with Sergio Perez on the first lap, and the second of the Force India drivers made it home in 11th place. Romain Grosjean was the only Lotus driver running at the end, Pastor Maldonado having parked up with a few laps to go. His demise may have been the lingering consequence of heavy contact with Esteban Gutierrez, who returned the favour from the pair’s collision in Bahrain. Ricciardo’s plan not to stop again for tyres worked – just. In the final laps Button had him in his sights and – more importantly – the prospect of finally taking a podium finish at his home race on his 15th attempt.

But it wasn’t to be – the pair were separated by less than a second at the finishing line. “If there’d been just one more lap, I think I could have made it past,” he said.

A top-three finish had been far from Bottas’s mind after Williams’ disaster in qualifying, but he went one better than he did in Austria two weeks ago. “We were thinking about points today not the podium, and the strategy guys did a great job.”

But for Hamilton there was a sense of satisfaction that fortune had turned in his favour. His early retirement in Australia was cancelled out, and the 25-point swing moves him within four points of Rosberg.

It was also some recompense for his misfortune twelve months earlier, when a tyre explosion robbed Hamilton of a chance to win at home and eventually handed victory to Rosberg.

On Saturday he had been the architect of his own demise – and afterwards Hamilton made it clear he realises that.

“Yesterday was a real kick in the balls,” he said. “I really had to pick up, pull up my socks and get on it if I want to win this world championship, and I can’t have situations like yesterday.”

“The last two races I’ve easily had the pace to be pole position and I’ve not put it there. I’ve put it much further back, made it much harder for myself but now I’m going to try to rectify that for the future.”