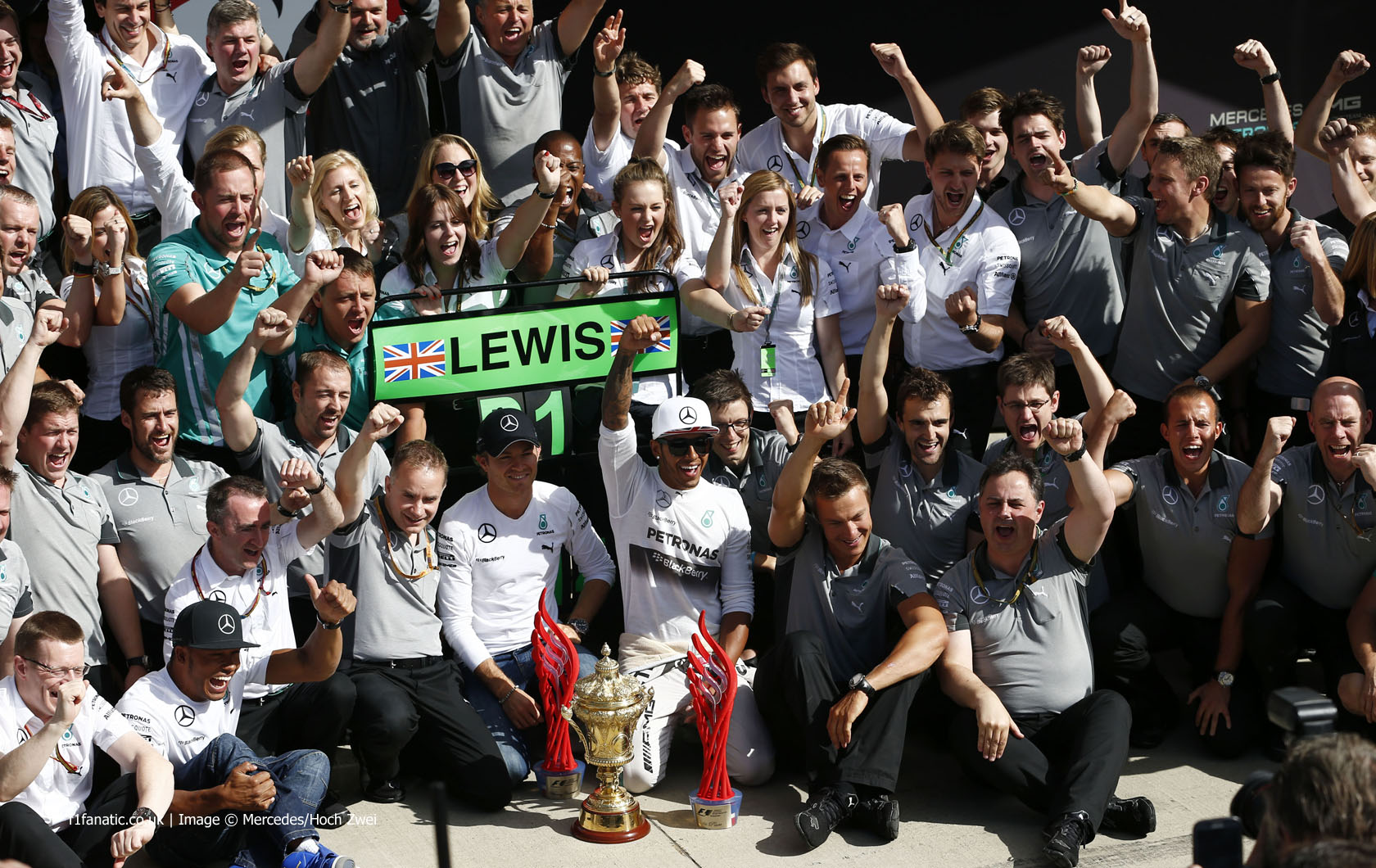 Lewis Hamilton claimed the 27th win of his career in the British Grand Prix, which was also the second time he has won his home race.

His latest victory moves him level with Jackie Stewart’s tally of 27 world championship wins. Only six drivers – including Sebastian Vettel and Fernando Alonso – have won more.

Hamilton lined up sixth on the grid, the lowest position he has ever started a race he went on to win. His previous best was also at achieved at Silverstone, from fourth in 2008, which he repeated in Hungary the following year.

Nico Rosberg gave Mercedes their 25th pole position. It was also the eighth of his career, giving him as many as Jenson Button, John Surtees and Ricciardo Patrese.

However in the race he posted his first retirement of the season, bringing his run of eighth consecutive podium finishes to an end. He had also scored points in the last 17 races – a streak bettered only Kimi Raikkonen (the record holder with 27), Michael Schumacher, Alonso and Vettel have bettered.

Alonso is now the only driver to have completed all 561 racing laps so far this year. He also kept up his record of scoring in every race this year, as did Nico Hulkenberg.

Several drivers were caught out by the rain in Q1 including the Ferrari pair. Their starting positions of 16th and 18th were the team’s worst since Malaysia 2010, where in similar circumstances Alonso and team mate Felipe Massa lined up 19th and 21st respectively.

Jules Bianchi took advantage of the rain to claim his and Marussia’s best-ever starting position with 12th. Massa marked his 200th race start at Silverstone, though his race was spoiled by Raikkonen’s crash on the first lap. In case anyone’s wondering why this milestone was celebrated 51 races after Ferrari acknowledged his ‘150th start’ in South Korea three years ago, it’s because Ferrari miscounted on the previous occasion.

Button’s hopes of scoring a first podium finish in his home race were dashed once more on his 15th appearance at Silverstone. As in 2004 and 2010 he could only manage fourth, albeit less than a second behind Daniel Ricciardo.

Two drivers made their first ever appearances in F1 practice sessions on Friday – Daniel Juncadella for Force India and Susie Wolff for Williams. The latter became the first woman to participate in an official F1 session since qualifying for the 1992 Brazilian Grand Prix – 8,126 days ago – when Giovanna Amati failed to make the cut in her Brabham.

Spotted any other interesting stats and facts from the British Grand Prix? Share them in the comments.

54 comments on “Hamilton’s home win ties him with Stewart”