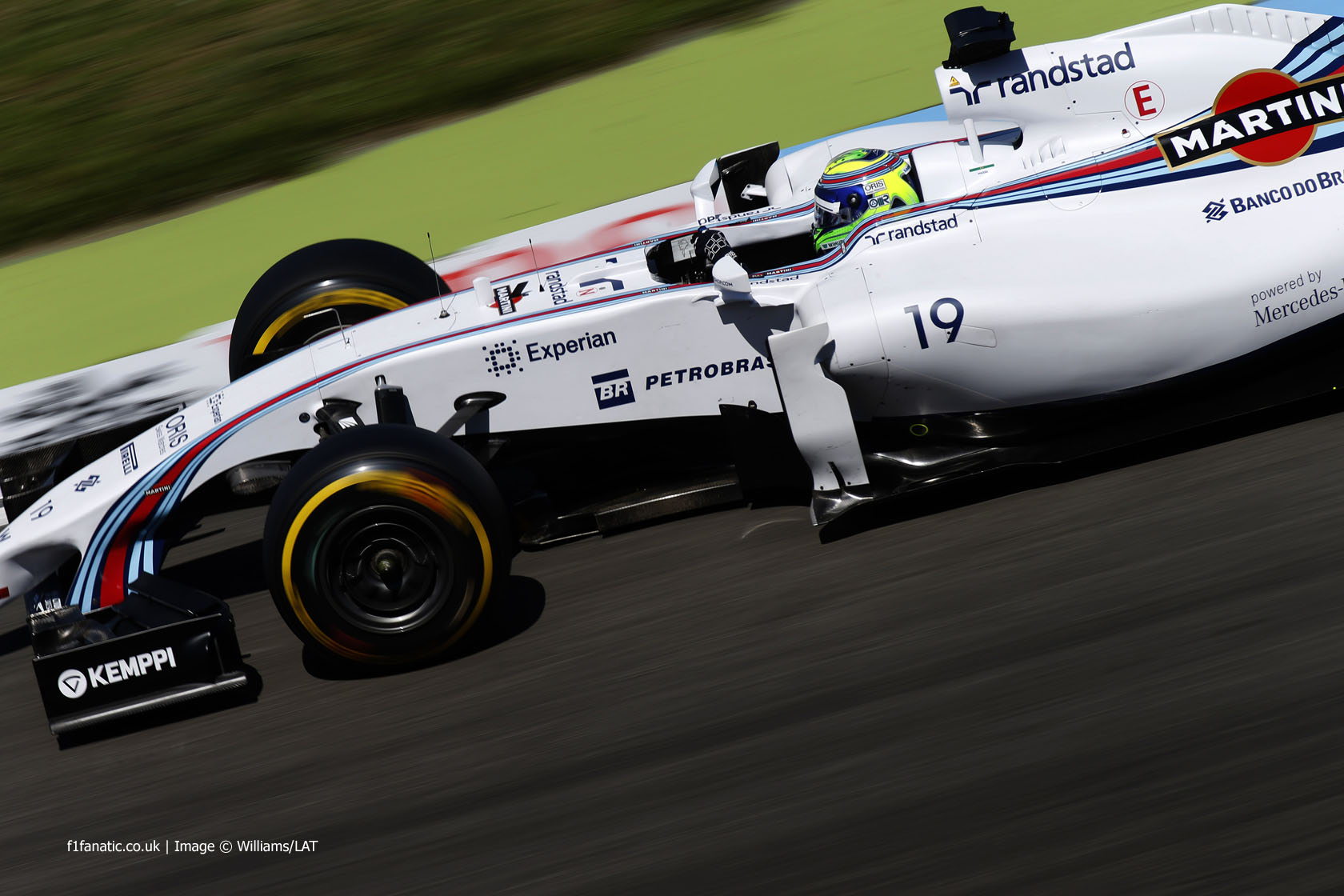 At best, Lewis Hamilton will start the German Grand Prix from 15th on the grid.

But depending on the extent of the repairs Mercedes deem necessary after his crash, including replacing the failed brake disc that caused it, he may end up having to start from the pit lane.

That would turn the already very difficult task of catching his pole sitting team mate and championship leader Nico Rosberg into a near-impossible one. But there are two things which could work in his favour.

As we’ve noted several times here this year, the Williams drivers are the ones to watch on lap one. Valtteri Bottas has made up 13 places at the start this year, Felipe Massa 12, and they are lined up right behind Rosberg at the start.

If Hamilton’s got any hope of catching his team mate, seeing either or both of those Williams cars get ahead would be a big help. Massa may prove just as big a threat as Bottas from third on the grid – he took the lead from there four years ago while pole sitter Sebastian Vettel was preoccupied covering off an attack from second-placed Fernando Alonso.

The run to the first corner is short – 260 metres – and the stewards generally turn a blind eye to drivers abusing the wide tarmac run-off area at the exit. From there the cars are soon on the long run towards the Spitzkehre – and as Austria showed Williams have the straight-line speed to put Mercedes under pressure when they start within range.

At the beginning of the weekend it looked as though we might see out first wet race of the year – and the first rain-hit race on the Hockenheimring since ins 2002 redesign. However the chances of that are fading at the moment.

This is bad news for Hamilton, who would have welcomed the added variable of wet conditions. The prospect of having to start a dry race from the pit lane is about as bad as it could get for him. However conditions are expected to cloud over at the track, reducing the air temperature by around five degrees. It will likely have a much greater effect on track temperatures, which hit a year-record high of 58C during practice.

It’s still going to be a warm race, though not one which would place as severe demands on Pirelli’s aggressive choice of soft and super-soft tyres as it might have done.

“I reckon in the race we will suffer more because of tyre degradation,” said Fernando Alonso, who will line up seventh on the grid. “With such high temperatures, the rear tyres slide a lot and it will be really important to choose the right number of stops to make.”

Alonso doubts he has a car to rival the Mercedes and Williams, but he may be able to take the fight to the Red Bulls ahead of him and Kevin Magnussen, who put his McLaren an excellent fourth on the grid.

The top ten qualifiers as usual all used the softest tyres in Q2 – in this case the super-soft – so that’s what they will start on. Rosberg used an extra set of super-softs during Q1 – something which could have cost him had he expected to face a straight fight with his team mate at the front, which now looked very unlikely.

Just about the only saving grace for Hamilton is that he has plenty of fresh tyres for tomorrow’s race. Even so, it looks like being a damage limitation exercise for him.

How do you expect the race to unfold? How far apart will the Mercedes drivers be at the chequered flag?

28 comments on “Hamilton needs help from the weather – or Williams”