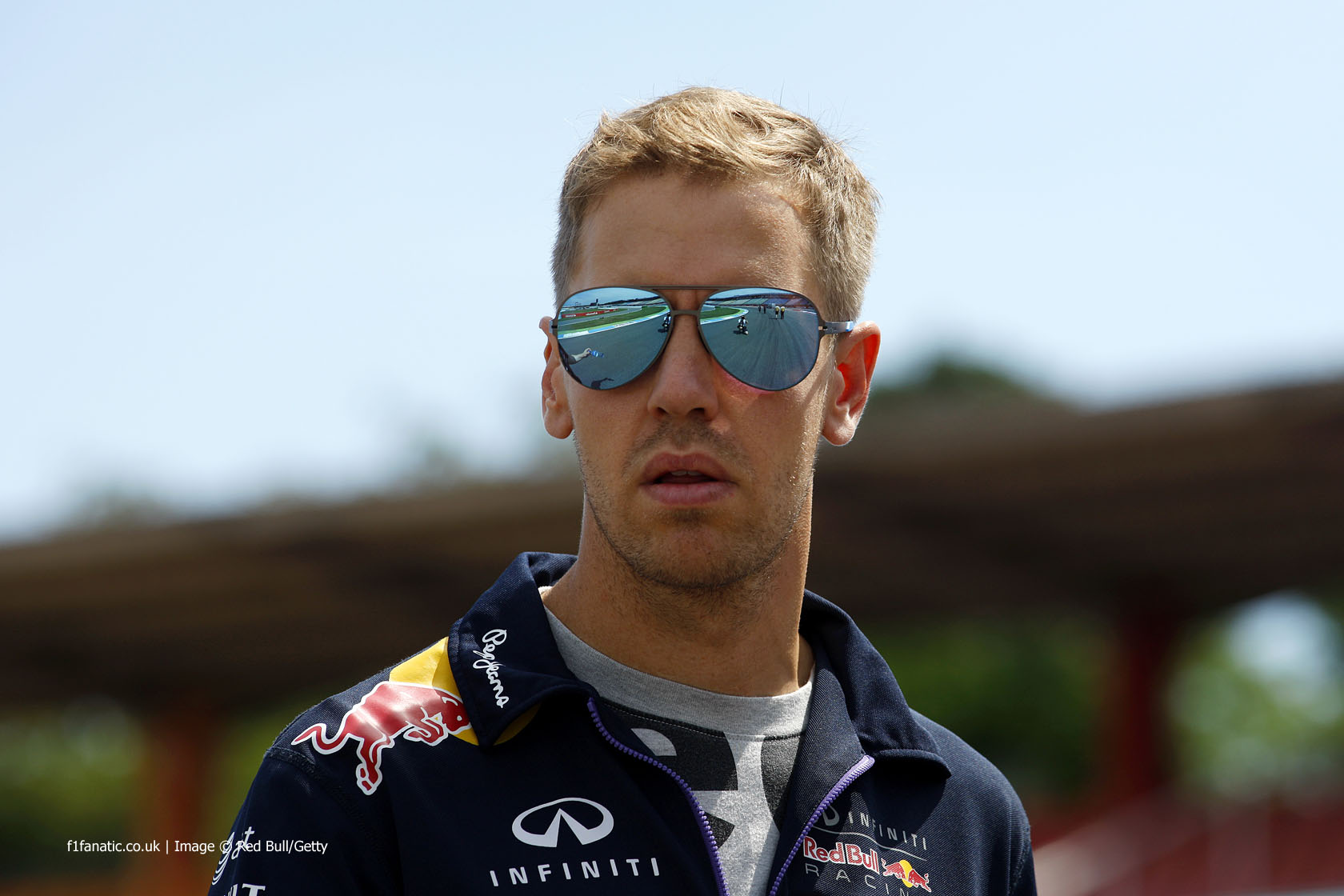 In the round-up: Sebastian Vettel’s complaints about F1 engine noise are linked to the poor turn-out for last weekend’s German Grand Prix.

Due to the technical problems some users experienced on Saturday this page has been set up to allow everyone to check their predictions were received.

The Predictions Championship results will be announced on Thursday so you have 48 hours to raise any problems with your predictions via that page.

Apologies for the inconvenience which was caused by an unforeseen technical problem which arose late on Saturday morning and caused problems with both the Predictions Championship page and the Contact Form.

F1 asks: Where did all the German fans go? (Reuters)

Hockenheimring adviser Katja Heim: “As a four times world champion from Germany, people believe him more than they would the sales people. So if he says there’s nothing any more for the fans, it’s not Formula One like it used to be, that was 100 percent quite damaging.”

Germany has a Formula One problem (The Telegraph)

“The attendance this weekend was nothing short of pitiful. At Silverstone, 90,000 came to Friday practice. Here it was probably around 10,000. It was a similar story for race day. While 122,000 flocked to the British Grand Prix, it is around 50,000 here.”

“Were they [Russia] in the World Cup or not? You would have thought people would have tried to stop it, wouldn’t you?” “I am not saying the young drivers don’t have the talent to be in F1, they have very good talent. But sometimes they need to understand that you cannot win the race at the first corner.”

“Kimi [Raikkonen] hit me. because when I watched the replay I was ahead. I locked up and he hit my wing.”

“The car felt much better here – more to my liking – I could drive it more as I wanted and it started to feel nice.”

Christian Horner: “It is not something we are going to protest, because really it is down to the stewards and if they are happy with it, it sets a precedent going forward.”

Glad someone is talking sense (A former F1 doc writes)

“I’d almost defy anyone to point out any advance in medical/rescue science, technique, or prevention (with the exception of the Zylon visor reinforcement, developed purely by engineers) applied by the FIA since 2008. The lack of progress, I believe, results from leadership that views the organisation as a cash cow rather than as a means to an end.”

Searching for NASCAR’s future (The Way It Is)

“All this discussion echoes the squabbles between Bernie Ecclestone and F1’s team owners over the past thirty years. The team owners are always pushing for more TV and prize money while endlessly discussing methods of cost cutting. In F1 the game goes on and on with little or no resolution and it will be interesting to see if RTA is able to make some real progress with NASCAR.”

Bernie Ecclestone “Not Planning” To Buy Back Formula One (Forbes)

“It remains to be seen whether F1 will sell for as much as $10 billion. A source close to the situation says ‘CVC have multiplied their investment several times and I think the reason why a sale is not happening is that the price they are seeking to achieve is not something the market is prepared to pay at the moment.'”

Although no further action, I understand Massa and not Magnussen was the driver under investigation for their incident yesterday

Also, Massa – of all people – telling youngsters to calm down is brilliant. At least he is talking from experience based on 2002 #F1

Some of the Hockenheim stands were busy – but this was a prime spot opposite the grid just before the race: pic.twitter.com/6KLOecJQhe

Where did you watch the German #F1 GP from? These fans took their lounge to the Hockenheim grandstand: pic.twitter.com/uE1qpkmbDl

As Adrian Sutil breaks Pierluigi Martini’s record for most F1 starts without a podium finish, Nic compares their careers:

By all means Adrian Sutil has had the more favourable position to actually end up on the podium and arguably he should have at the 2009 Italian Grand Prix. The only thing that ‘excuses’ Sutil’s new record is his beginnings being miles away from the podium and his team mates (in the shape of Liuzzi, Di Resta, Hulkenberg and Gutierrez) have amassed the same number of podiums, albeit in less time. ;)

Personally I feel Pierluigi Martini’s performance is incredible, to score that often with Minardis. Meanwhile, there have been several windows for both Adrian Sutil and Force India, but they have managed to miss them all. To me, it’d be the same as someone managing the same statistics of self-inflicted DNFs as Andrea de Cesaris.
Nick (@Npf1)

Niki Lauda won the British Grand Prix 30 years ago today, moving within two-and-a-half points of team mate Alain Prost, who had led the race until he dropped out with gearbox trouble.

The race was run in two parts after being red-flagged due to a crash on lap 11. Derek Warwick finished second ahead of Ayrton Senna, who made his return to the podium following his breakthrough result in Monaco.