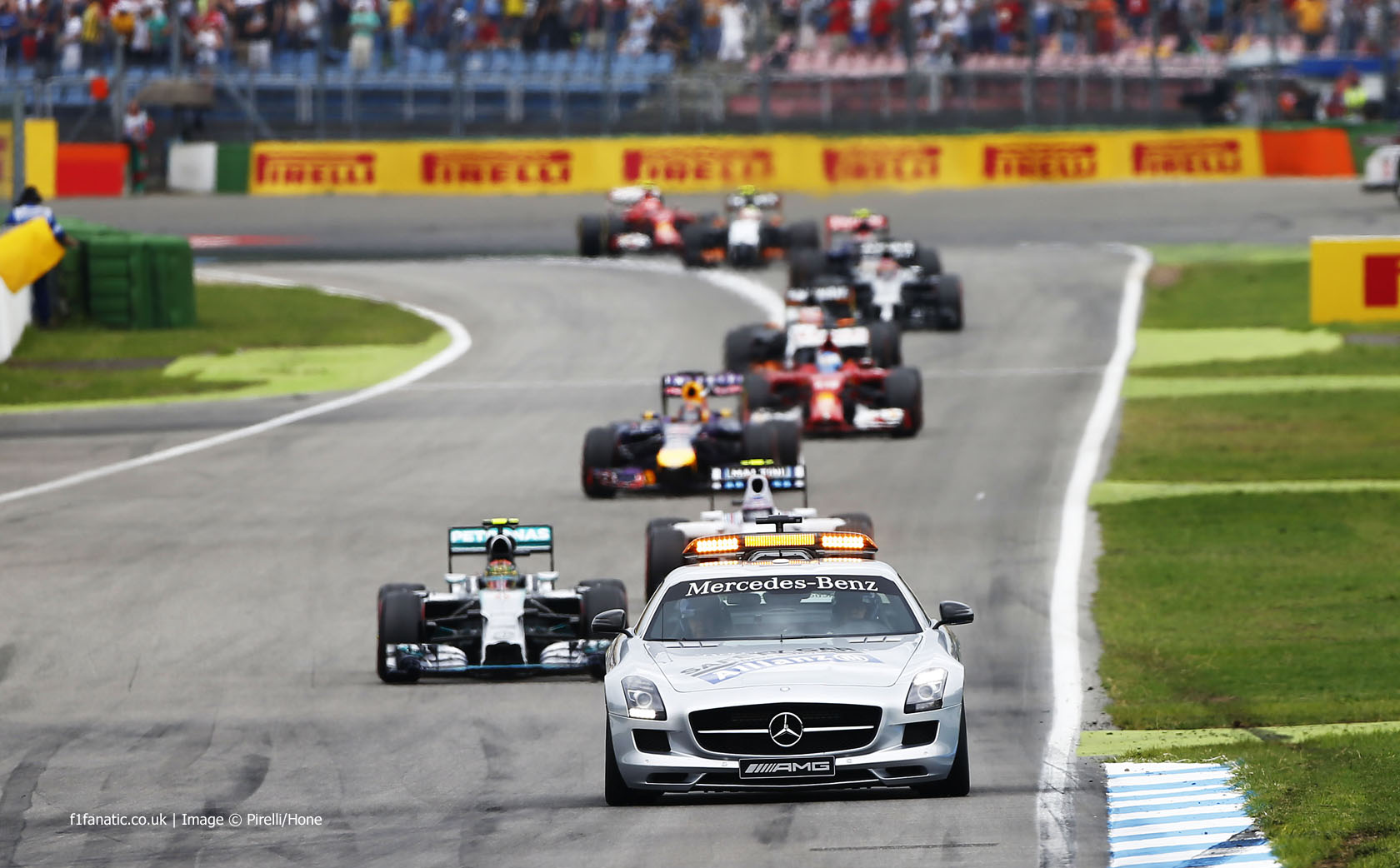 The 2014 German Grand Prix was another well received race continuing the current trend. The drivers seemed to use every part of the tight and narrow track with some going three abreast into corners.

The track seemed most tight in the first corner where Felipe Massa and Kevin Magnussen collided. The tangle brought out the Safety Car and mixed up the field leading to some great scraps for position.

Sadly the winner was all-but decided on Saturday when Lewis Hamilton suffered a brake failure, which was later compounded by a gearbox change penalty. Hamilton put in an impressive performance battling through the field to third but it was Nico Rosberg who cruised to victory and proved Mercedes still have the advantage after the FRIC ban.

The race was rated the third best of the season and the second highest German Grand Prix since 2008. It was another race weekend which enjoyed a positive reaction from F1 Fanatic readers, further indication that Luca di Montezemolo hasn’t got around to registering an account here yet.

We were treated to some great battles during the race. There was a real sense that the drivers were going for it with no fear of making a move. Luckily most of the scraps were clean with only a few causing minor damage. The stewards were particularly lenient over ‘racing incidents’ which was nice to see.

Seriously enjoyed the Alonso battles today. The guy has been involved in some of the best battles since I’ve been watching the sport.

The better drivers must look forward to squaring off against him. Vettel, Webber and now Ricciardo have had me out of my chair as they take on Alonso. Great to see the absolute professionalism and respect they give each other.
Bravo.
@Glennb

Fantastic to watch Hamilton battle through the field. Great wheel-to-wheel action from so many – Alonso, Vettel, Hulkenberg, Raikkonen, Kvyat, Hamilton and several others. The last few laps were great, watching Bottas keep Hamilton at bay.

True, there was no battle for the lead but there was enough great action behind Rosberg along with several spectacular incidents that I didn’t really mind!
@Colossal-squid

It’s a shame to think how many people enjoyed the race on television when so many seats at the track were empty:

It was very exciting, there were a lot of overtakes.
@Saubers1

Apart from the leader being untouchable it was a spectacular race. Three-wide into a hairpin – what more could you ask for?
@Bazza-spock

Really nice race, never boring. My favourite race of the year so far, barely found the time to pick up something to eat in the fridge.
@Spoutnik

Spot-on or overkill? As always DRS was a hot topic:

I didn’t like that the DRS secured plenty of “highway” passes throughout the race. However I liked it when the drivers closed on each other and in the hairpin were fighting closely in the following corners, especially when they were more than three cars like in the first laps. That was awesome.
@Cocaine-mackeine

DRS stopped this from scoring higher, it was a bit too much here, but overall it was great, and there were plenty of overtakes outside of the DRS. Very nice!
@Philereid

There were a few passes that were a bit too easy, but with the Red Bull battles with Alonso for example it worked really well I felt – just allowing the drivers to get close enough.
@Vettel1

Drivers giving way to others may have given a false impression that DRS was over-powerful.
@Sato113

Others may be happy watching button pushing and pathetically easy DRS passes, but it’s just a pathetic spectacle watching one car with its wing open, cruise past the defenceless car ahead in a boring and utterly unexciting manner.
Davey

But not everyone enjoyed what they saw:

I did watch the race from green lights to chequered flag. I did not see any excitement anywhere.

The television commentators are working hard as much as they can to make it a little interesting. The Alonso versus Ricciardo duel was nice. Raikkonen-Vettel-Alonso sandwich moment was two seconds of fun. But otherwise it was a dull race.

Maybe people are seeing more than what I am but I have honestly watched better races in 20-plus years to call this an exciting race.
@Tmax

It is difficult for me to get overly excited about a grand prix where Alonso and Ricciardo are fighting tooth and nail (aka racing) for fifth position while Bottas is being told not to race Hamilton too hard for second in order to conserve his tyres.

Don’t get me wrong, I fully understand his engineer, however tyre management, fuel management and fake DRS passing is not that thrilling to me. It also does not help that the cars resemble something my cat coughed up and they sound like my riding mower. Give us real racing please and not the gimmicky sideshow which now passes for F1.
Jackal

The German Grand Prix was a small improvement, the people giving it a good rating must not have seen the real F1 racing of old when racing drivers were on the limit all through the race not just a few laps then coast.

I’ll hold on a few months more in hope that F1 will improve then if not Sky Sports is cancelled. I think Mr Ecclestone has gone too far in controlling the racing an ruined it in the process… sad but true.
@Spin

One point on which many were united was the surprising sight of a stationary car being left unattended in the middle of the track with no Safety Car being deployed. To many, the safety of the marshals who ran across the track to recover it was needlessly risked:

I have to say the when Sutil went off and stopped in the middle of the track off the last bend I thought there should have been a safety car bearing in mind when one was deployed for a bit of damaged barrier at the British Grand Prix.
Simon Parker

Who knows that Charlie Whiting was thinking, it was ludicrous – I’ve never seen anything like it. If it rains we have an Safety Car out for ten laps, or a bit of debris on track, even when off-line we sometimes get a Safety Car. It was madness.

I just had the horrible image of a poor .arshal falling over, injuring him or herself, and attempting to hobble on only for a car to come swooping around the corner. There’s a reason the usual response to this circumstance is to call out the Safety Car. My word!

What I’m even more surprised about is the lack of coverage of this by media and fan outlets. Sure, all’s well that ends well but it was a poor call that could have, and in the past has, resulted in serious injury or death to a marshal.
@Pastaman