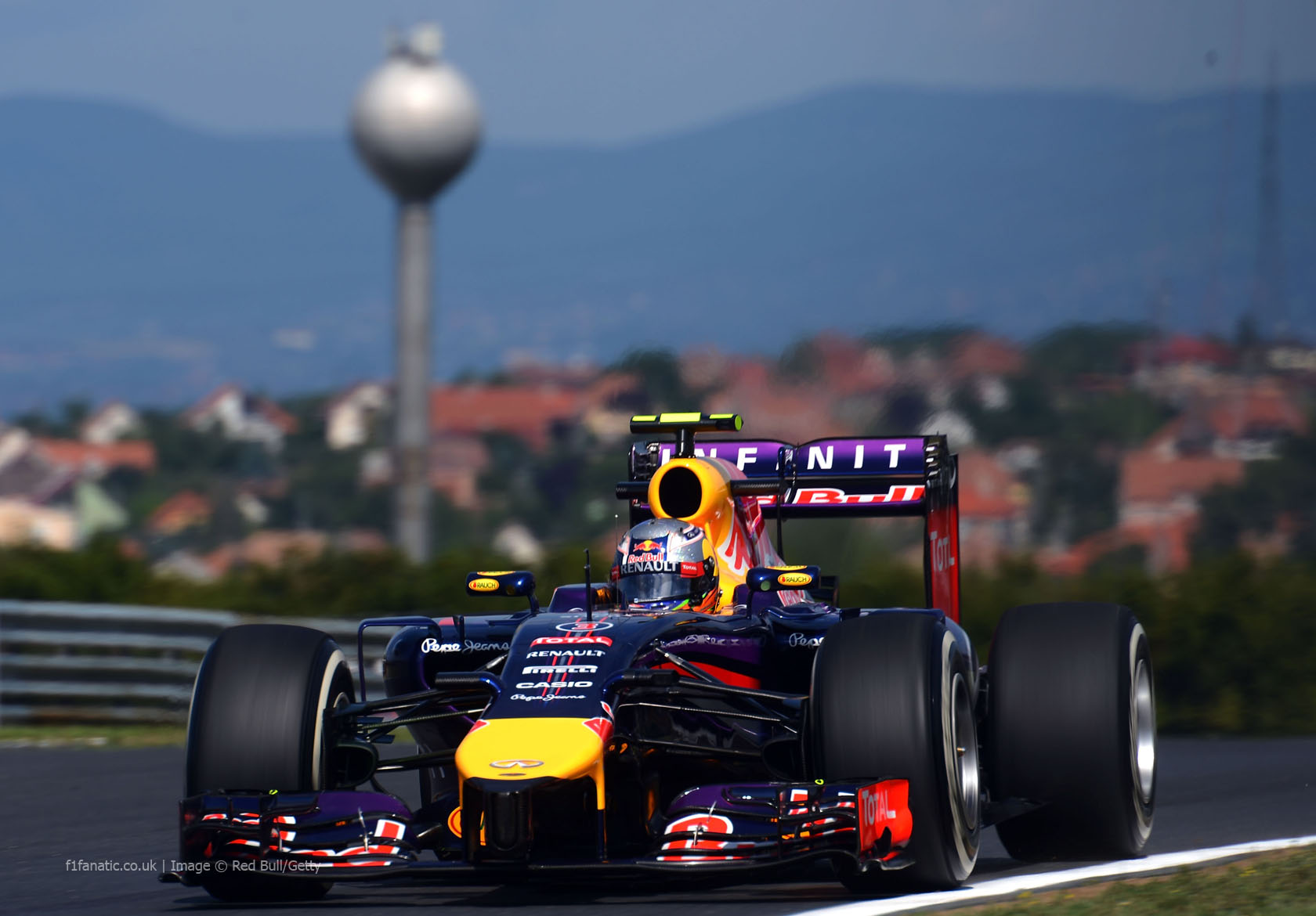 Daniel Ricciardo took his second victory of the season after a thrilling Hungarian Grand Prix in which Lewis Hamilton recovered from a pitlane start to the podium, one place ahead of Nico Rosberg.

During a memorable grand prix, the Red Bull driver fought his way past two world champions in the closing laps during a nail-biting three-way battle for the lead involving Ricciardo, Fernando Alonso – who finished second – and Hamilton’s Mercedes.

The drama began 40 minutes before the race began when a sudden downpour drenched the circuit and left teams and drivers rapidly re-evaluating their strategies.

With the track ranging from wet to damp to bone dry, the rain having subsided and the warm temperatures already beginning to dry the track, all of the teams opted to start the race on Intermediate tyres. At the formation lap, Daniil Kvyat was left stranded on the grid with the Russian claiming over team radio that his engine had inexplicably switched itself off.

The Toro Rosso was cleared and the cars formed up for a nervous start around a damp track. As the lights went out, Rosberg held his lead into the first corner as Valtteri Bottas and Fernando Alonso both passed Sebastian Vettel.

After starting from the pitlane, Lewis Hamilton’s attempts to make another dramatic recovery from the back took a knock almost immediately as the Mercedes driver spun under braking for Turn Two, striking the wall with his left-front tyre. Despite suffering minor damage to his front wing, Hamilton continued without pitting.

Sebastian Vettel took back third from Alonso’s Ferrari halfway around the first lap, before the Spaniard ran very deep into Turn One, only just avoiding losing another position.

By the start of Lap Five, Rosberg had already established a lead of almost seven seconds over Bottas’s Williams, while Hamilton had recovered from his spin up to 17th place.

Three laps later and a dry line was now slowly beginning to emerge. Rosberg locked up under braking for Turn 1, losing almost two seconds of his advantage in the process, while Hamilton passed Raikkonen for 13th.

All of a sudden, Marcus Ericsson’s Caterham was in the wall – the rookie having lost control at the exit of Turn Three and speared into the barriers. The Safety Car was immediately deployed and suddenly there was a mad dash for the pitlane with Ricciardo, Magnussen and Massa all switching to Soft dry tyres, while Button pitted for Inters.

Out front, Rosberg, Bottas, Vettel and Alonso had all missed the opportunity to pit when the Safety Car was deployed and were forced to stop one lap later, meaning that Ricciardo inherited the lead, with Button second, Massa third and Rosberg now in fourth.

With the Caterham cleared, the race was due to resume before Romain Grosjean lost control of his Lotus out of Turn Three while still under the Safety Car and slid into the inside barrier, putting him out of the race and keeping the Safety Car on circuit for two more laps.

When the race eventually resumed, Button pressured Ricciardo for the lead and passed the Red Bull exiting Turn 1. After resuming in fourth, Nico Rosberg appeared to be suffering from braking issues and was passed by Jean-Eric Vergne in the Toro Rosso. With Hamilton now up to seventh, the two championship contenders were separated only by Sebastian Vettel’s Red Bull.

On Lap 17, Nico Hulkenberg made a major error under braking for the final corner and hit his Force India team mate Sergio Perez, putting the German out of the race for the first time this season and leaving the Mexican with minor rear damage.

Hamilton continued to pressure Vettel ahead, but the race was suddenly under Safety Car again on Lap 23 when Sergio Perez lost control after running wide on the exit of the final corner and slid into the pit wall, causing heavy damage to the second Force India.

Ricciardo immediately pitted again from the lead, as did the two Williams drivers who both opted for Medium tyres in what appeared to be a strategic decision to try and get both cars to the end.

This promoted Fernando Alonso to the lead of the race behind the Safety Car, ahead of Vergne, Rosberg, Vettel and Hamilton who had all chosen not to pit.

With Rosberg unable to pass Vergne, Mercedes opted to bring the championship leader in for new tyres, but a slow stop meant he resumed in tenth, behind Bottas’s Williams. Meanwhile, Sebastian Vettel suddenly lost control out of the final corner in similar fashion to Perez, but, unlike the Force India driver, was able to keep the car out of the wall.

With Rosberg and Vettel out of his way, Hamilton quickly caught up to Vergne and managed to dispatch him with a bold move around the outside of Turn Four. Hamilton and Ricciardo quickly set about reeling in the leading Ferrari.

Rosberg passed eventually passed Bottas into Turn 1, but after losing time behind the Williams, Rosberg was now more than a pit stop’s length behind his team mate ahead. Alonso pitted from the lead on Lap 39, resuming behind his former team mate Felipe Massa.

Having started from the pitlane, Hamilton now found himself out in front. After using all the life from his tyres, the Mercedes pitted from the lead at the end of Lap 40 for Medium tyres, crucially rejoining ahead of his team mate, who was now on Soft tyres.

This meant that Ricciardo had inherited the lead again, with Massa now second, ahead of Alonso in third and the two Mercedes, Hamilton and Rosberg, fourth and fifth respectively. Daniel Ricciardo was heard complaining of power surge issues, but was able to maintain a 15 second gap to Massa’s Williams until the Brazilian pitted on Lap 46.

With Rosberg needing to stop again, Hamilton was informed to not hold up his team mate. After expressing his concerns that his tyres may not hold up for the remainder of the race, Hamilton was reassured that tyre wear should not be a concern for him.

With Rosberg still behind Hamilton and needing to stop again, Hamilton was told to let his team mate past along the start finish straight. But with Rosberg around a second behind his team mate, Hamilton told the team that he would not slow down to let his rival past unless he able to get closer.

In the lead, Ricciardo was concerned about his tyre life for the remainder of the race and Red Bull decided to bring him in for a final stop, with Mercedes pitting Rosberg for another set of Soft tyres soon after. Alonso and Hamilton were now out in front, but Ricciardo was soon bearing down on the two, setting up a tense three-way fight for the win with ten laps to go.

Behind them, Rosberg used his new tyres to pass Raikkonen, Massa and Bottas and began to chase down the leading pack. With the top three separated by less than three seconds, Ricciardo began to swarm all over the back of Hamilton’s Mercedes, but the Briton was able to hold off the Australian’s assault.

With four laps to go, Ricciardo eventually managed to charge around the outside of Hamilton at Turn Two to take second place from the Mercedes. With Hamilton unable to push any harder, the Mercedes driver now had to contend with his championship rival now right behind him having made up almost an entire pit stop length’s worth of time to his team mate.

Having passed Hamilton, Ricciardo saw his opportunity to snatch the lead from Alonso into Turn 1 and dived past the Ferrari with three laps to go. It looked as though the Ferrari’s tyres were finished, but Hamilton was unable to find a way through himself.

Ricciardo duly drove away to claim his second victory of his career in dramatic fashion. Alonso managed to hold on to a superb second place, while Hamilton secured a scarcely believable third place after starting from the pitlane. Despite his fresher rubber and significant pace advantage, Rosberg was unable to pass his rival and was resigned to a fourth place finish.

Felipe Massa took fifth for Williams, followed by Kimi Raikkonen who recorded his season best finish in sixth. Vettel finished seventh after his spin, just ahead of Valtteri Bottas. Jean-Eric Vergne and Jenson Button rounded out the points.