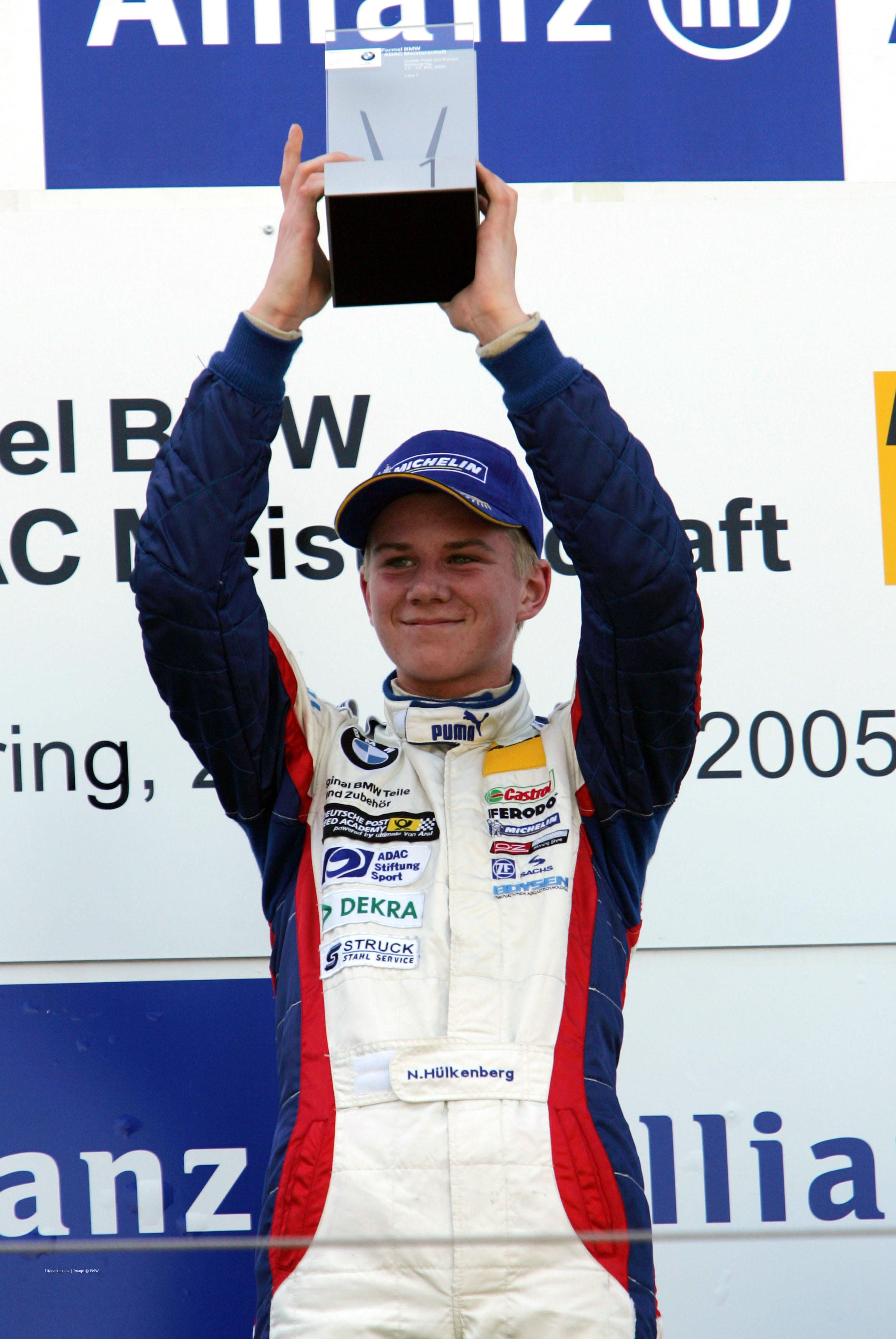 “I can say that the boy has an unbelievable talent. So much about him already reminds me of Michael Schumacher.” Willi Weber’s 2007 endorsement of Nico Hulkenberg, who he was managing at the time, says everything you need to know about one of Germany’s brightest young talents.

The country which already has one multiple champion in Sebastian Vettel and current points leader Nico Rosberg could one day have another in the shape of Nico Hulkenberg. His junior career demonstrated he has the ability to continue the current domination of Formula One by German drivers.

Hulkenberg was born in August 1987, and first got behind the wheel of a kart ten years later. The German karting scene enjoyed a boom period in the late nineties thanks to the many youngsters inspired by the success of Schumacher.

Despite the abundance of competitors, Hulkenberg made his mark by winning the German Junior Karting Championship in 2002, aged 15. the following year he clinched the German karting Championship, a category he again excelled in in 2004 before moving into single-seater racing.

Vettel had dominated Germany’s Formula BMW championship in 2004, but the next year Hulkenberg distinguished himself by winning the title at his first attempt – despite a controversial end to the season.

Driving for the Josef Kaufmann team, a well-respected organisation that had previously helped a young Gerhard Berger on the road to F1, Hulkenberg was immediately on the pace. He won eight rounds outright and was top rookie in all bar four of that year’s races.

One of the few races where he failed to score points was at the Norising, where in race one he knocked team mate Nick de Bruijn into a spin on lap two:

The pair shared the front row for the second race, but it was Hulkenberg who won from pole, claiming his seventh win of the year.

The title was decided in controversial fashion. Sebastien Buemi was declared champion after the final double-header event at Hockenheim, but under protest as Hulkenberg had been given a 30-second penalty for illegally passing Buemi during a Safety Car restart. However on appeal a 60-second penalty was imposed on Buemi, whom it was ruled had braked hard before the restart, causing Hulkenberg to pass him. Losing the win cost Buemi the championship to his rival. “In the end justice won out,” said Hulkenberg. “Buemi’s manoeuvre endangered all the cars behind him. Now I can enjoy my title.”

More controversy soon followed, however, at BMW’s World Final event. Held for the first time at the Bahrain International Circuit and featuring Formula BMW drivers from around the world, this time it was Hulkenberg who won on the road but was penalised for a Safety Car infringement. He therefore fell to third behind Buemi and overall winner Marco Holzer – who also earned a coveted F1 test.

A measured step up in 2006 saw the young German move into German F3, rather than the more prestigious European series. It was to be a relatively disappointing year, with Hulkenberg winning just once before a mid-season chassis change dropped him from championship contention and saw him end the year fifth.

His next move was an unusual one. A1 Grand Prix, the ‘World Cup of Motorsport’ for drivers in single-spec chassis, was entering its second season. Hulkenberg was enlisted to drive Germany’s entry for the majority of the 2006-07 championship, and set about rejuvenating his somewhat-battered reputation by dominating A1GP.

Hulkenberg won the first feature race of the year at Zandvoort, but his next race at Brno came to a swift end following this tangle with title rival Jonny Reid of New Zealand:

After that Hulkenberg got into his stride, and at Sepang romped to a dominant 42-second win during a rain storm. By the end of the year he’d racked up nine victories and almost single-handedly took Germany to the crown. Michael Schumacher appeared in person to hand the 19-year-old his title.

Hulkenberg’s A1 Grand Prix success did not deflect him from an otherwise conventional path towards F1. For 2007 he moved up to the F3 Euro Series and took his first win at the Norisring in fine style having started 18th. It made up for his disappointment in the other of that weekend’s races when he spun off while battling Romain Grosjean:

Two further wins followed for Hulkenberg later that year, notably at Zandvoort where he again distinguished himself in very wet conditions. He ended the year third in the championship, behind Grosjean and Buemi and in front of another future F1 driver, Kamui Kobayashi.

Grosjean had become the fourth driver in a row to win the title for ASM, following the likes of Lewis Hamilton, Paul di Resta and Jamie Green. Hulkenberg extended the run in 2008, after the team was rebranded as ART.

He dominated the season, winning seven of the season’s ten feature races and claiming 76 of his eventual 85 points in the Saturday races. It helped matters that a stewards’ decision to strip him of victory in Zandvoort, where his car was found to be underweight, was overturned on appeal.

The 21-year-old claimed the title at Le Mans during the penultimate race weekend of the year. After another win at the final round in Hockenheim he had almost twice the points of second-placed Edoardo Mortara:

By now Hulkenberg was also dovetailing his F3 programme with a new role as a Williams F1 test driver. He made his next step up the ladder with ART and into another now-defunct winter series – GP2 Asia.

Although he contested just four of the eleven rounds, one win and three other top-four placings saw Hulkenberg take 6th in the championship, sandwiched by fellow future F1 drivers Vitaly Petrov and Sergio Perez, both of which had entered every race. He also got the chance to renew his rivalry with Kobayashi in Bahrain:

Williams demonstrated their faith in Hulkenberg by choosing him to conduct the shakedown test of their new FW30 chassis at the beginning of 2009. But his main occupation that year was the main GP2 championship with ART.

Hulkenberg had a shaky start to the season with a no-score at the opening race weekend in Spain. Grosjean and Petrov to open up a points gap by the time the field arrived at the Nurburgring for the halfway point of the championship.

But when he reached home ground Hulkenberg was revitalised, winning both races. The second of these, from eighth on the grid on a damp track, was another showcase for his superb touch in low grip conditions:

Hulkenberg added a third consecutive victory in the first race at the Hungaroring a week later. He added another win at Valencia, and a further boost to his title hopes came when Grosjean left the series to make an early entry into F1 with Renault.

That meant Hulkenberg arrived at the penultimate race weekend at Monza poised to add the GP2 championship to his increasingly impressive CV. Third place duly sealed the title, and as well as being the first rookie champion since Hamilton he also made history by becoming the first driver to clinch the title before the final race weekend of the season.

Williams now had every reason to consider promoting him for 2010. During the winter they parted ways with engine supplier Toyota, meaning a new driver could be found to take the place of Kazuki Nakajima, who owed his place in the team to their backing.

Rubens Barrichello was already confirmed in place of the departing Nico Rosberg, leaving the door open for Hulkenberg to make the step up to the race team. Although his Williams association ultimately only lasted on season, it was the break that gave him the chance he had craved to show his skills in Formula One.