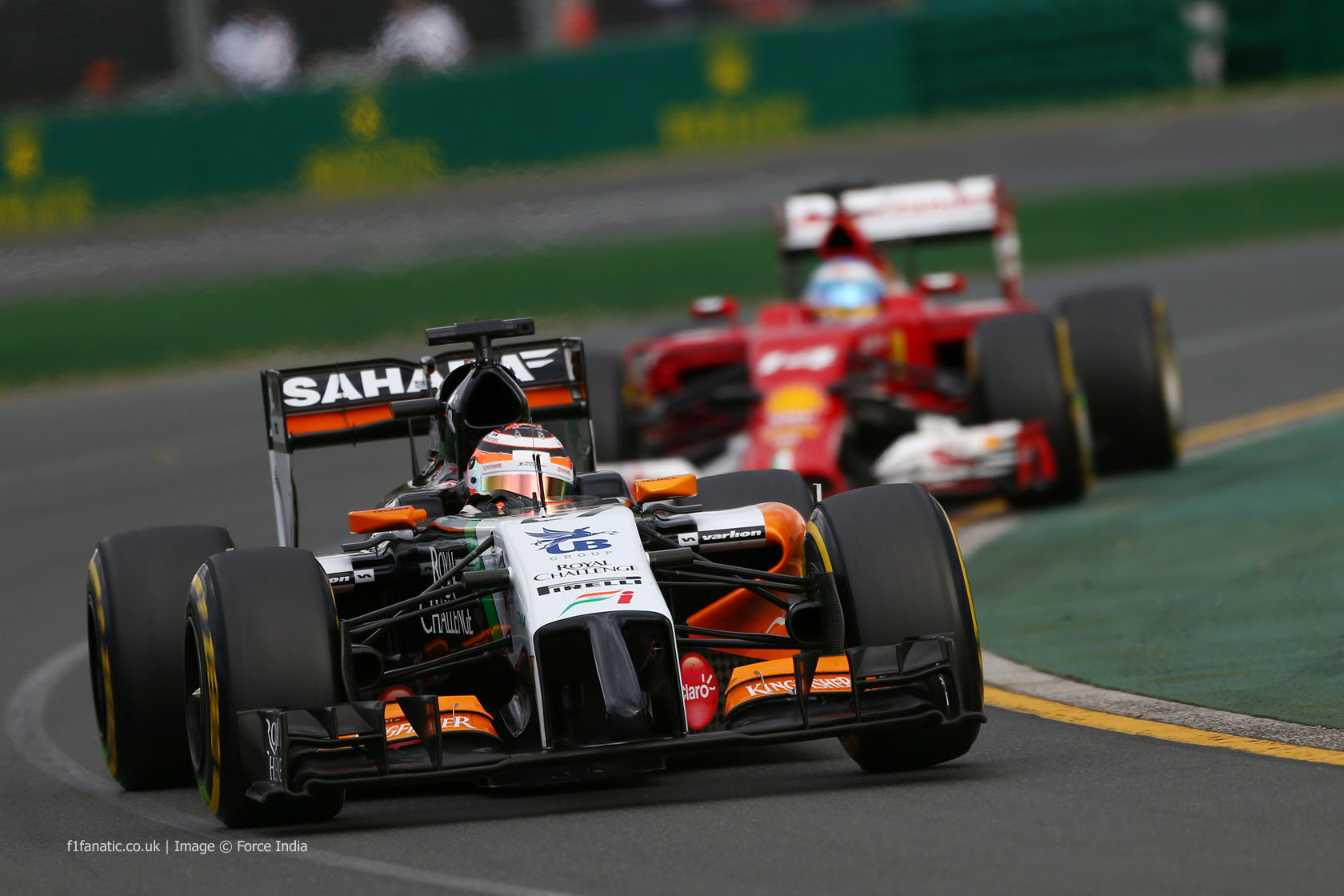 The mid-season driver rankings continue with part two – you can read part one here. Key stat: Scored Force India’s best result with third in Bahrain but only had one other top-eight finish

By a stroke of fortune, having left ‘top team’ McLaren for ‘midfield team’ Force India, Perez arguably now has a more competitive car underneath him. But while his team mate heads both McLaren drivers in the points, Perez is behind the pair of them. This has largely been down to some sub-par qualifying performances – getting his tyres up to temperature has been the problem on more than one occasion, notably at Silverstone and Barcelona.

He has, however, given Force India their biggest payday so far in terms of points by getting on the podium in Bahrain, passing Nico Hulkenberg along the way. He was in fine form in Austria, too, leading on his way to sixth, a gain of nine places over his starting position.

Part of the reason he started so low down on that occasion was his penalty from the previous race, where he had been on course for another big points haul before unwisely deviating from the racing line in the braking zone as Felipe Massa moved to pass him on the last lap. Up against a team mate of Hulkenberg’s calibre and with Force India aiming for the top five, he can’t afford to squander points like that.

Key stat: Made it into Q3 eight times – twice more than Button has

Being the first rookie to make his F1 debut for McLaren since Lewis Hamilton, expectations were inevitably high for Magnussen. Astonishingly he met them in his first race, taking third place in Australia which became second after Daniel Ricciardo’s exclusion.

The keys to that result were an error-free driver on a track he’d never raced on before and an excellent qualifying performance, the latter being an area where he has impressed compared to his world champion team mate. He was fourth on the grid again in Germany, but his race was ruined at the first corner by Felipe Massa.

With McLaren having produced another indifferent machine, their new driver has usually been found plugging away in the midfield. There have been blips along the way, including contact with Kimi Raikkonen in Malaysia and Bahrain, and a hefty smash in the rain-hit qualifying session in Hungary. But on the whole Magnussen has coped well with being thrown in at the deep end.

The stand-out moment of Bianchi’s season so far was, of course, ending Marussia’s three-year wait (plus two years as Virgin) for a point in Monaco. He managed it by elbowing Kamui Kobayashi out of the way at Rascasse in a brilliantly opportunistic move.

But there have been other occasions when Bianchi his proved his talent deserves to be put in a more competitive machine. In a wet qualifying session at Silverstone he took Marussia to new heights with 12th on the grid, and in Hungary demonstrated he is the team’s quickest driver even in a badly wounded car.

It bears remembering that he began the year with a couple of rash incidents in Malaysia (with Jean-Eric Vergne) and Bahrain (with Adrian Sutil), but that’s pretty much all to count against him so far. He’s building a solid case for Ferrari to finally promote him to the very top.

Key stat: Qualified 4.5 places higher than his team mate on average – the best of any driver

At times, Grosjean’s driving has been capable of making even the sinfully ugly Lotus E22 a joy to behold. Dragging the unworthy car to fifth on the grid at the Circuit de Catalunya, and eighth at the chequered flag despite yet another power unit problem, ranks as one the best giant-killing performances of the year.

He repeated that result at Monaco and remains the sole contributor to Lotus’s points tally. Arguably just as impressive as his points-scoring feats was his performance in Malaysia, where despite a major handling imbalance due to a broken diffuser he resisted pressure from Raikkonen to finish 11th.

Lotus have struggled to make further gains in recent races, and the FRIC ban clearly hasn’t helped. And Grosjean took the shine off an otherwise excellent first-half performance by spinning off during a Safety Car period in Hungary.

Key stat: In the ten races where both McLarens finished, Button was ahead eight times

Button has consistently got the job done for McLaren this year and it will be to the frustration of both that occasional opportunities for much better results have narrowly passed them by. Such as in Hungary, where he was the first driver into the pits during the first Safety Car period – and the team made the baffling decision to put him on intermediate tyres.

Australia was another such missed opportunity – Button backed off for Raikkonen’s crash during Q2 and failed to make the cut. That meant it was his team mate who scored the team’s best result of the year so far, though Button made his way up from tenth to finish behind him.

Button has usually spearheaded challenge of the ‘other’ silver cars, notably on home ground at Silverstone where he claimed an excellent third on the grid in damp qualifying positions and narrowly missed out on a podium finish. He was fourth in Canada as well after springing a double-pass on Fernando Alonso and Nico Hulkenberg. People sat up and took notice when the world champion team ended Mercedes’ dominance in Canada because it wasn’t their world champion driver who won the race. Vettel had been leading team mate Daniel Ricciardo but came out of his second pit stop in traffic, giving his team mate to jump ahead and eventually claim the win.

That was one of several reminders this year that the comfortable margin Vettel once enjoyed over his team mate is a thing of the past. He’s looked uncomfortable at the wheel of the RB10 even when it has been working – which all too often it hasn’t.

His races in Australia, Monaco and Austria were scuppered by technical problems, and further glitches hampered his qualifying efforts on other occasions. But cancelling these out would not tip the qualifying scoreline (7-4 to Ricciardo) or race results (6-1 to Ricciardo) decisively in Vettel’s favour. Vettel has admitted Ricciardo has done a better job with a car he hasn’t fully got to grips with yet.

Partly because his team mate has driven so well, and partly because we have come to expect so much from Vettel, it’s been easy to overlooked some of his better moments this year. Such as coming within five-hundredths of a second of taking pole position off Lewis Hamilton in the rain in Malaysia, or battling from 15th on the grid to finish fourth in Spain. But there is no denying Ricciardo has him under the kosh, and how he responds will be one of the fascinating storylines of the second half of the season. Key stat: Has the best qualifying scoreline against his team mate: 9-2 (Alonso has the same over Raikkonen)

Having been passed over by too many top teams Hulkenberg must be drawing some satisfaction from having his new team mate and former McLaren driver comfortably handled so far. But it’s not been as one-sided at Force India as some expected.

Hulkenberg had been piling up the points until the last race in Hungary, where exuberance seemed to get the better of him in the kind of damp conditions where he usually excels. Having just passed Sebastian Vettel at the restart he went wide at turn five and later collided with his team mate.

Until then he had been a model of points-scoring consistency and the bedrock of Force India’s best season so far. A regular in Q3 and a fixture in the points, the only question mark over Hulkenberg’s performances this year is how Perez managed to get the car into stronger finishing positions on occasions, such as in Bahrain and Austria.

The final part of the rankings will be published on Friday.

How do you think these seven drivers have performed so far in 2014?