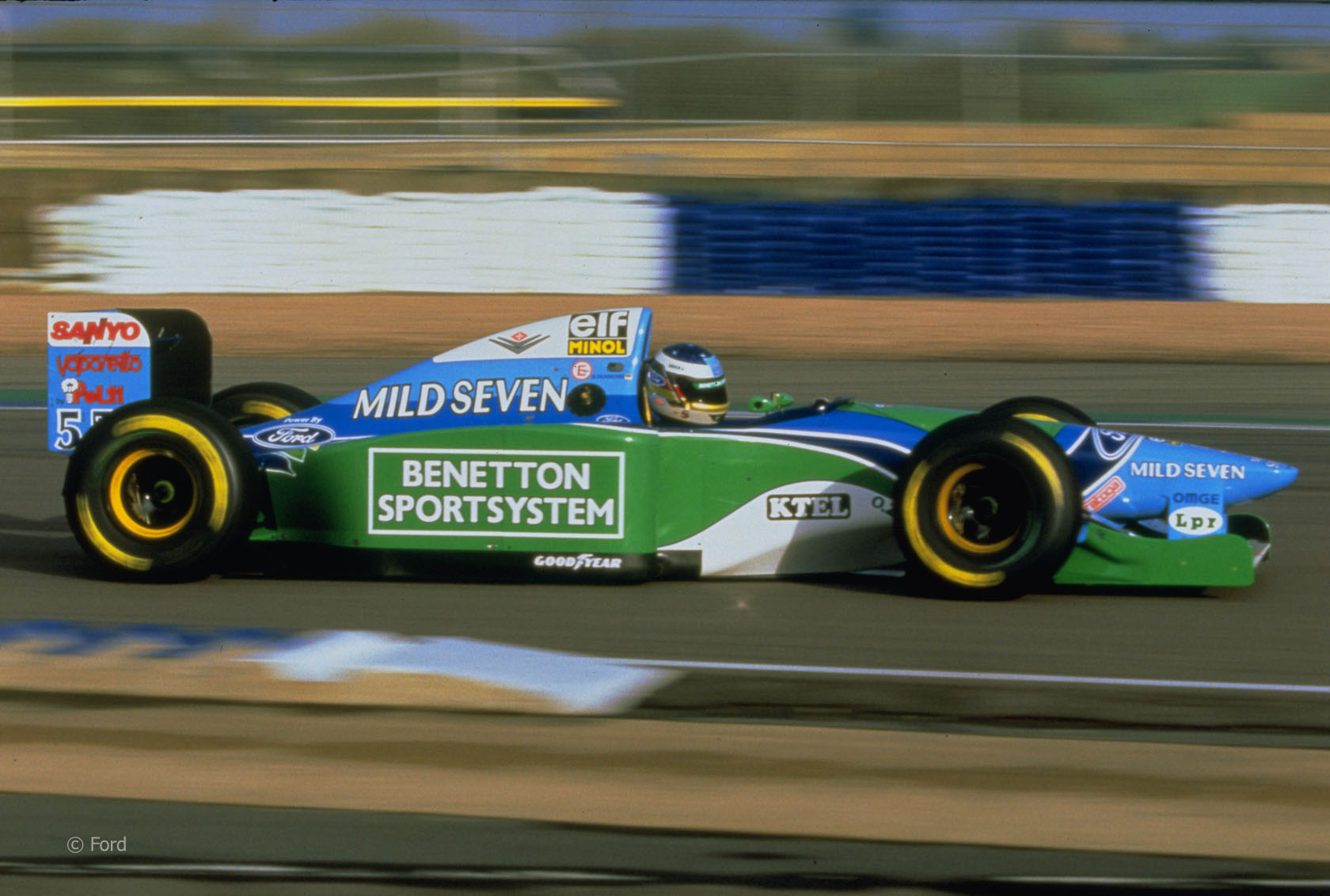 Approaching the tenth round of the 1994 season in Hungary, championship leaders Benetton were suffering the effects of a tough summer.

It wasn’t just that they had left the previous two races point-less, and faced accusations over using an illegal launch control system. A series of rules infractions at Silverstone meant Michael Schumacher was racing under appeal, waiting until the end of August to discover whether he would face a two-race ban – or possibly worse.

Piling misery upon misery, in Germany a refuelling fire injured Jos Verstappen and several of the team’s crew. Fear of a major fire had arisen when the FIA reintroduced in-race refuelling at the beginning of the season and the story dominated the build-up to the Hungarian Grand Prix.

Then two days before practice was due to start in Hungary the FIA claimed the fire had started because Benetton had tampered with their rig to increase the speed of their pit stops. The team found themselves at the centre of another media storm and facing fresh accusations of cheating.

Benetton’s refuelling rig had been inspected two days after the German Grand Prix, following which the FIA concluded the fire had started because the team removed a filter from the fuelling system. The filters were in place to ensure no contaminant entered the tank along with the fuel, and the FIA believed that allowed a piece of debris to become lodged in a valve in the nozzle, causing fuel to spill out.

“The foreign body is believed to have reached the valve becausse a filter designed to eliminate the risk had been deliberately removed,” the FIA announced, claiming it increased the fuel flow rate by over 12%. This could have reduced Benetton’s pit stop times by around a second, which inevitably focused minds on occasions when Benetton’s pit stops had proved decisive in earlier races, such as in Brazil.

Benetton vigorously refuted the FIA’s explanation. The team brandished a report written by Peter Coombs, director of a company called Accident and Failure Technical Analysis, who had inspected the team’s refuelling equipment. The report was highly critical of the design of the Intertechnique refuelling rigs which the FIA required all teams to use.

“The design of the engagement system does not ensure or even assist alignment of the axes of the two mating valves during engagement,” Coombs noted. However he also added “the precise mechanism which enabled fuel spillage is not clear”.

Furthermore Benetton claimed Intertechnique had given permission for teams to remove the filters from their rigs, and produced a letter from the company to rival team Larrousse – who used Benetton gearboxes – attesting to their claim.

Ahead of a World Motor Sport Council hearing into the matter on September 7th reports claimed Benetton planned to argue that defective refuelling equipment was responsible for the fire and had prepared a list of similar incidents involving problems with the rigs which they and other teams, including Ferrari and Arrows, had experienced.

However on the day of the hearing Benetton’s lawyer George Carman, a prominent QC who had handled several high-profile libel cases, entered a guilty plea on behalf of the team.

Ecclestone told Carman that Benetton could expect a leaner punishment if they pleaded guilty, and advised Mosley that Benetton were looking for a “plea bargain”. With Schumacher already facing a two-race ban, Benetton were eager to avoid him missing any further races.

The WMSC accepted Benetton’s plea and declined to levy any new sanction on the team. Given the severe penalties already imposed on previous occasions, including a three-race ban for Eddie Irvine in Brazil and Schumacher’s suspended two-race ban, this was surprisingly lenient.

The council noted that “a junior member of the Mild Seven Benetton Ford team – on his own initiative – removed the filter from the Benetton refueling equipment without consulting the team director” and they had “made no attempt to conceal the fact that they had removed the filter”. It added Benetton had “undertook to make substantial management changes so as to ensure that a similar event could never happen again”.

But that outcome lay in the future as the teams assembled at the Hungaroring. In the meantime Intertechnique supplied all teams with modified filters for the first race since the Hockenheimring fire.

Benetton weren’t the only ones in trouble at the German Grand Prix. McLaren were without Mika Hakkinen, who had been handed a one-race ban for triggering a crash on the first lap. But this at least allowed the team to address a long-running point of conflict with engine supplier Peugeot.

Jean-Pierre Jabouille, the former grand prix winner who now headed their engine operation, had lobbied hard for fellow Frenchman Philippe Alliot to be given the Martin Brundle’s seat.

This went to ridiculous lengths. In a side-by-side test involving the two drivers at the Paul Ricard circuit Alliot posted a faster time, but McLaren only discovered the means by which this had been achieved when Alliot’s telemetry revealed his steering wheel had been pointing straight as he drove through one of the chicanes.

Nonetheless Jabouille claimed the real reason McLaren wouldn’t run Alliot was because “the English teams do not think much of French drivers”. This overlooked the fact France’s only world champion, Alain Prost, had taken all four of his titles with English teams – three with McLaren and the final one with Williams less than 12 months previously.

However Hakkinen’s enforced absence meant Alliot finally had his chance, and the 40-year old was back behind the wheel for the first time since the previous year’s French Grand Prix. But he provided little justification for Jabouille’s vociferous lobbying, spinning off during the first practice session and having to take over Brundle’s car.

The two McLarens were separated by eight places on the grid, Brundle taking sixth behind Ukyo Katayama. The Tyrrell driver qualified in an impressive fifth place for the second race in a row, and was less than three-hundredths of a second slower than David Coulthard’s third-placed Williams.

The front row was occupied by the championship contenders: Schumacher was more than half a second quicker than Damon Hill, and was also fastest in the Sunday morning warm-up.

Having ended their win drought in Germany, Ferrari were struggling on the twisty Hungaroring. Jean Alesi and Nicola Larini had spent six days testing on three circuits trying to remedy the 412T1’s poor low-speed handling. Despite that Alesi could do no better than 13th, while team mate Gerhard Berger lined up fourth.

Boosted by his podium finish in Germany, Olivier Panis qualified inside the top ten for the first time. His team mate was plagued by gearbox problems on Saturday which left him over two seconds slower.

A despondent Johnny Herbert could do no better than 24th and was even out-qualified by one of the Simteks. “The car’s undriveable,” he said of the team’s recently-introduced 109 chassis, “it’s a bucket of shit”.

The last time Schumacher and Hill occupied the front row had been at Silverstone, where Schumacher’s problems had begun when he passed Hill on the formation lap. This time it was Schumacher who led Hill, and when the Benetton slowed suddenly on their way to the grid Hill wondered if his rival was trying to sucker him into making the same mistake.

Hill later pointed out that after the French Grand Prix, where the quality of Schumacher’s starts became a major talking point, the Benetton driver hadn’t been getting off the line as successfully. He also claimed Schumacher had been performing more standing starts during testing, and they produced noticeably more tyre smoke than in his early-season starts.

Schumacher did not make a great start in Hungary either. Despite being on the clean side of the track, Schumacher immediately fell a full car length behind Hill. But the Benetton driver braked later, turned in sharply and Hill, mindful of his first-lap contact with Katayama in Germany, ceded the position.

Behind them Panis jumped the start, gaining three places before getting bottled up behind Brundle. Alesi seized the initiative, passing several cars around the outside of the first corner, then benefited from a three-way tangle at turn two to end the first lap in seventh.

When the dust setted on the first-lap fracas Eddie Jordan was dismayed to see both his drivers walking back to the pits during the first tour for the second race in a row. The pair had gone into turn two side-by-side with Katayama on their right, and all four spun into retirement.

After the warm-up Hill had guessed Schumacher might try a three-stop strategy and was tempted to do the same. His suspicions were confirmed during the race when, as the pair began to lap the backmarkers, Schumacher headed for the pits on lap 17.

Benetton had reorganised their pit crew due to injuries sustained in Germany. But any nervousness they felt had no effect on the quality of their pit work, and Schumacher was quickly on his way again. It was to be a busy day for them: Schumacher would be serviced twice more and Verstappen had two stops to make.

Hill ran eight laps longer than Schumacher during the first stint, losing more time in traffic, but the real damage was done after his first stop. With Schumacher now on a lighter fuel load, the gap between the pair of them reached half a minute by lap 30, and now Schumacher knew he could make two stops to Hill’s one and keep the lead.

Williams’ disappointment was compounded on lap 60 when Coulthard spun into a barrier, losing what would have been his first podium finish. Brundle therefore inherited third place but he was destined not to finish there – partly thanks to Schumacher’s quick-thinking.

The Benetton driver relaxed his pace towards the end of the race and allowed Brundle to un-lap himself. Then, realising his team mate was the next driver behind the McLaren, Schumacher backed off further to let Verstappen through, giving him the chance to benefit from any problems Brundle might encounter.

Verstappen reaped the dividend of Schumacher’s quick thinking when an electrical fault halted the McLaren on the final lap, handing him third place.

Brundle was classified fourth, and having lost a podium finish he could at least draw satisfaction from having comfortably beaten Alliot. Both Ferrari drivers had retired while running in fifth place, so that position was decided in a last-lap tussle between Mark Blundell and Panis. The pair were separated by a tenth of a second at the line, Blundell having been held up by the other Ligier of Eric Bernard, who was almost a full lap behind his team mate.

Michele Alboreto finished seventh which prompted Minardi to lobby the stewards over Panis’s jump start. However as the rules stipulated that any penalty had to be levied within 15 minutes of the infraction, no action was taken.

The celebrations began at the cafe owned by Verstappen’s parents as their son clinched not only his first points, but his first podium finish and the first for a Dutch driver in Formula One.

The result was a vindication for Benetton after weeks of speculation and investigation, not to mention the trauma of the Hockenheim fire.

Hill saw Schumacher’s lead increase to 31 points, and the disappointment of losing again at a venue where he expected the revised Williams to be more competitive led him to fear his title chances were fading – even with Schumacher likely to miss two of the remaining six races.

16 comments on “Benetton bounce back with double podium”