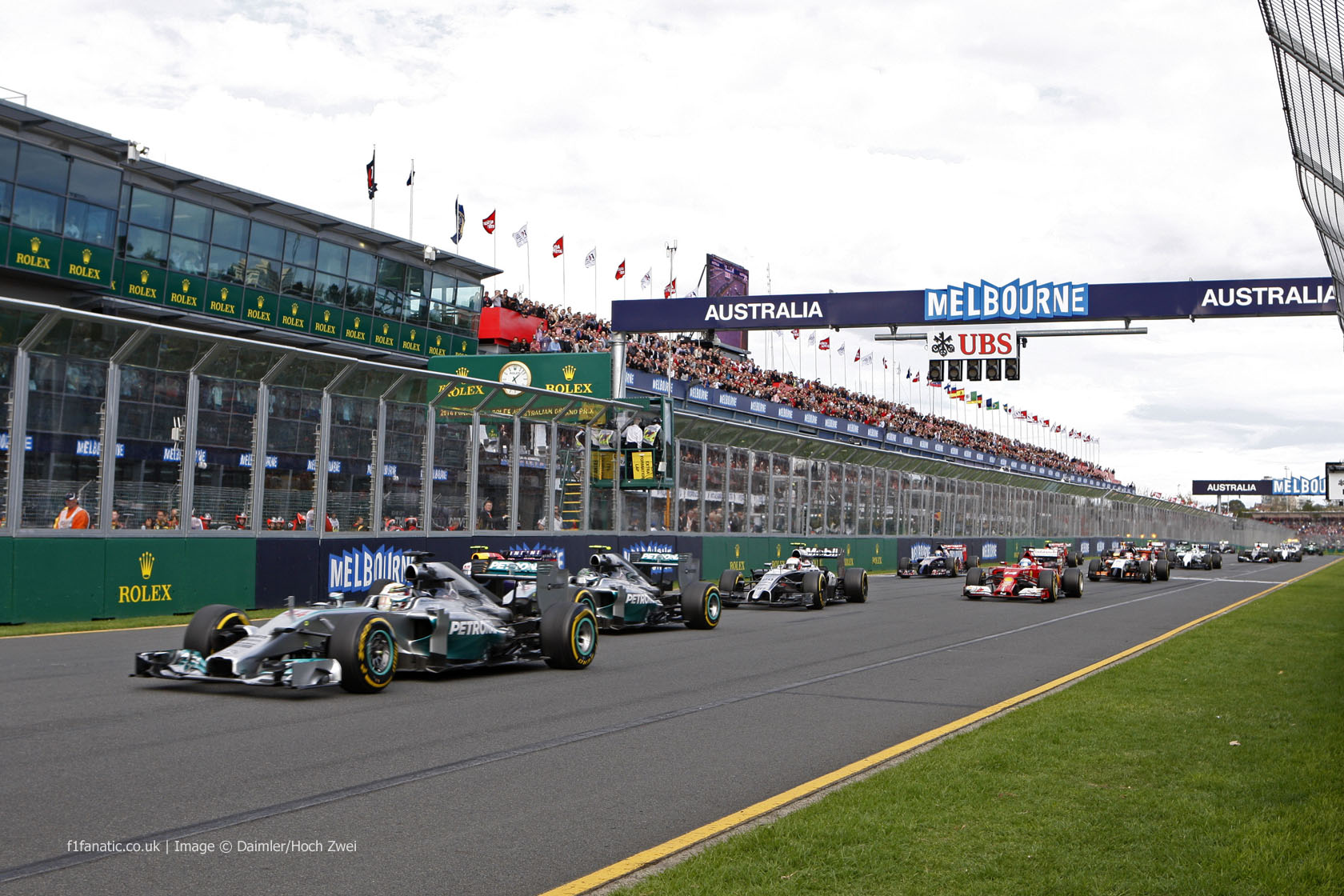 It is in F1’s nature that sometimes one team will have the best car over the course of a season and the drivers’ championship becomes a contest between their two racers.

When this happens the battle between the pair can be strongly influenced by how reliable their cars are. Lewis Hamilton is acutely aware of this at the moment, as race failures in Australia and Canada plus problems during qualifying in Germany and Hungary are a large part of the reason why he is 11 points behind team mate and championship leader Nico Rosberg.

Hamilton might feel hard done by if he were to lose the championship by that amount, but he wouldn’t be the first driver to lose out in this fashion. Here are some of the more memorable championship battles between team mates where unreliability was arguably the deciding factor. The first championship grand prix gave a strong indication how the inaugural title would be settled. Giuseppe Farina won the race and was joined on the podium by two of his Alfa Romeo team mates.

But one of the four Alfas did not reach the chequered flag at Silverstone. Juan Manuel Fangio had retired eight laps from home when his engine died.

Fangio hit back at the second race, winning in Monaco while Farina crashed out (pictured). But while Fangio did not have the monopoly on car problems – fuel pump problems for Farina in the penultimate race set up a showdown at the season finale – Fangio plainly had the worse luck of the pair.

The title was decided in the last race at Monza where fortune favoured Farina once more. A stone went through Fangio’s radiator, forcing him into the pits where he took over team mate Piero Taruffi’s car. Then the engine failed on Fangio’s second machine, which left Farina to win the race and take the title. After achieving the unique feat of winning the world championship at the wheel of his own car in 1966, Jack Brabham lost the championship to team mate Denny Hulme the following year. And it may have been the case that by tinkering a little too much with his own car Brabham tipped the balance towards his team mate.

The pair began the season running the BT20 chassis which Brabham had took the title with the previous year. He started his points haul with fifth at Kyalami having pitting to investigate an electrical problem.

A more serious failure wrecked Brabham’s race in Monaco. Having qualified on pole an engine problem forced him into a spin at Mirabeau on the first lap, so he left the principality without adding to his score while Hulme won.

The new BT24 let both drivers down on its debut in Belgium, but it proved its worth when Brabham led a one-two in the French Grand Prix. However his race at Silverstone was typical of the kind of niggling faults that undermined his championship defence – a severe vibration caused both mirrors to fall off, which left him defenceless against Hulme’s attack. He then delayed the progress of Chris Amon’s Ferrari, and by doing so inadvertently protected Hulme’s lead.

The championship situation became more difficult for both drivers in the second half of the season as the new Lotus 49 with its Cosworth DFV engine was clearly the class of the field. Jim Clark used it to win the last two races of the year, and Hulme had only to follow him home in Mexico to grab the title off his team mate.

“I must say that Jack gave me a very useful car for the season,” said Hulme afterwards. “Maybe I didn’t always have the latest equipment on my car, but it was possibly more reliable than his because of this.”

“There were occasions when Jack carried out some experiments with his car that didn’t come off – like trying a big-valve engine which didn’t prove successful. Mind you, if the experiments had worked, he might have won, so I was perhaps in the happier position of not having to drive a ‘guinea pig’ car.

The iconic image of Gilles Villeneuve is of him dragging his three-wheeled Ferrari 312T4 back to the pits at Zandvoort in 1979. While his car let him down more often than team mate and eventual champion Jody Scheckter’s did that year, few would dispute there were occasions when Villeneuve exacted a higher toll on his machinery.

That’s not to say he was always to blame for the problems that held him back that year, and there were plenty: a blown engine in Argentina, a broken rear wing in Germany and – most cruelly – running out of fuel after a heroic recovery drive to third place in Belgium.

With three races left to go, Ferrari called off the fight. Villeneuve dutifully followed his team mate home at Monza, guaranteeing Scheckter the title. Another win and a second place for Villeneuve over the final races left him four points behind his team mate in the final reckoning. Whatever the causes of Villeneuve’s car problems, they had cost him dearly. Niki Lauda, Mercedes’ non-executive chairman, can sympathise with Hamilton’s plight from his own experience. Any hopes Lauda had of defending his third and final title were ruined by the mostly dreadful luck in 1985.

He’d beaten McLaren team mate Alain Prost to the 1984 title by half a point. But there would be no repeat of that close finish the following year as Lauda suffered the most appalling misfortune.

It began at the first round where the fuel metering unit packed up. A faulty piston ended his race in round two. He spun out in Monaco but the next four retirements were all down to the car: Canada: engine; Detroit: brakes; France: gearbox; Britain: electrics. Lauda cursed his misfortune, but trashed claims of a conspiracy within the team against him as “utter nonsense”.

By the tenth race of the season, his home grand prix in Austria, Lauda had only seen the chequered flag twice. He decided he had endured enough and announced his intention to retire at the end of the year. His race was ended by another turbo failure, but one week later at Zandvoort the car finally held and he took his sole victory of the year.

Normal service was resumed at Monza, where the transmission packed up. A wrist injury kept Lauda out of the cockpit at Brands Hatch while Prost clinched the championship. After the final two rounds Prost had amassed 73 points to Lauda’s 14 – the latter inevitably having retired from his swansong races in Kyalami (turbo) and Adelaide (brakes). After the thrilling end to the 1986 championship, the following season was an anti-climax. Williams team mates Nigel Mansell and Nelson Piquet fought each other with great verve during the year, notably at Silverstone, but during practice for the penultimate race at Suzuka Mansell injured his back, handing Piquet the title.

In the final reckoning Mansell took six wins to Piquet’s three, and would have had several more with better luck. A turbo problem put him out while leading in Monaco, another engine win cost him a potential win in Germany, and he was six laps from victory in Hungary when a wheel nut came off his car.

Such problems were few and far between for Piquet who only suffered a single mechanical failure – a broken exhaust in Belgium – before the title was decided. Despite the notorious animus between the pair at the time, Piquet later admitted Mansell had been unlucky not to win the championship in 1987. The 1989 championship-decider was one of the most acrimonious the sport has ever seen. Ayrton Senna was poised to overtake team mate Prost for a crucial win in the penultimate race when Prost, knowing Senna would lose the title if he failed to finish, turned in and made contact.

The pair had gone into that race with the title hanging in the balance largely due to the misfortunes Senna had suffered earlier in the season. Despite that there were claims, propagated by no less than the president of the sport’s governing body, that Prost was receiving inferior equipment.

However it was Senna who suffered race-ending mechanical trouble while leading in Phoenix, Montreal and Silverstone, and he dropped out on the first lap at Paul Ricard when his differential packed up.

Accusations that McLaren’s engine supplier Honda was giving Senna better equipment peaked at Monza, where he out-qualified Prost by 1.7 seconds. FISA president Jean-Marie Balestre weighed in on Prost’s side, but on race day it was Senna’s McLaren which failed to go the distance. His car broke down again while he was leading – another setback which put the pair on a collision course at the penultimate round.

Reliability in the 2014 title fight The misfortune Hamilton experienced in the last two races could have been much more damaging to his championship chances. He has done well to keep the deficit to his team mate down to 11 points, and with 250 available over the final races there is still everything to play for.

As the championship calendar has grown in recent seasons, drivers have more opportunities to make up for misfortune earlier in the year. The 2010 championship is an example of this: arriving at the final race Sebastian Vettel trailed team mate Mark Webber partly due to costly car failures in Bahrain, Melbourne and South Korea, but Vettel clinched the title in the finale at Abu Dhabi.

However Hamilton and Rosberg will be acutely aware that this year the final race offers double points, so any mechanical misfortunes will there be punished twice as severely.

Which other championship battles between team mates were strongly affected by unreliability – in F1 and other series? Do you expect reliability to decide the outcome this year?

53 comments on “Hamilton vs Rosberg: How reliability has decided team mates’ title battles”