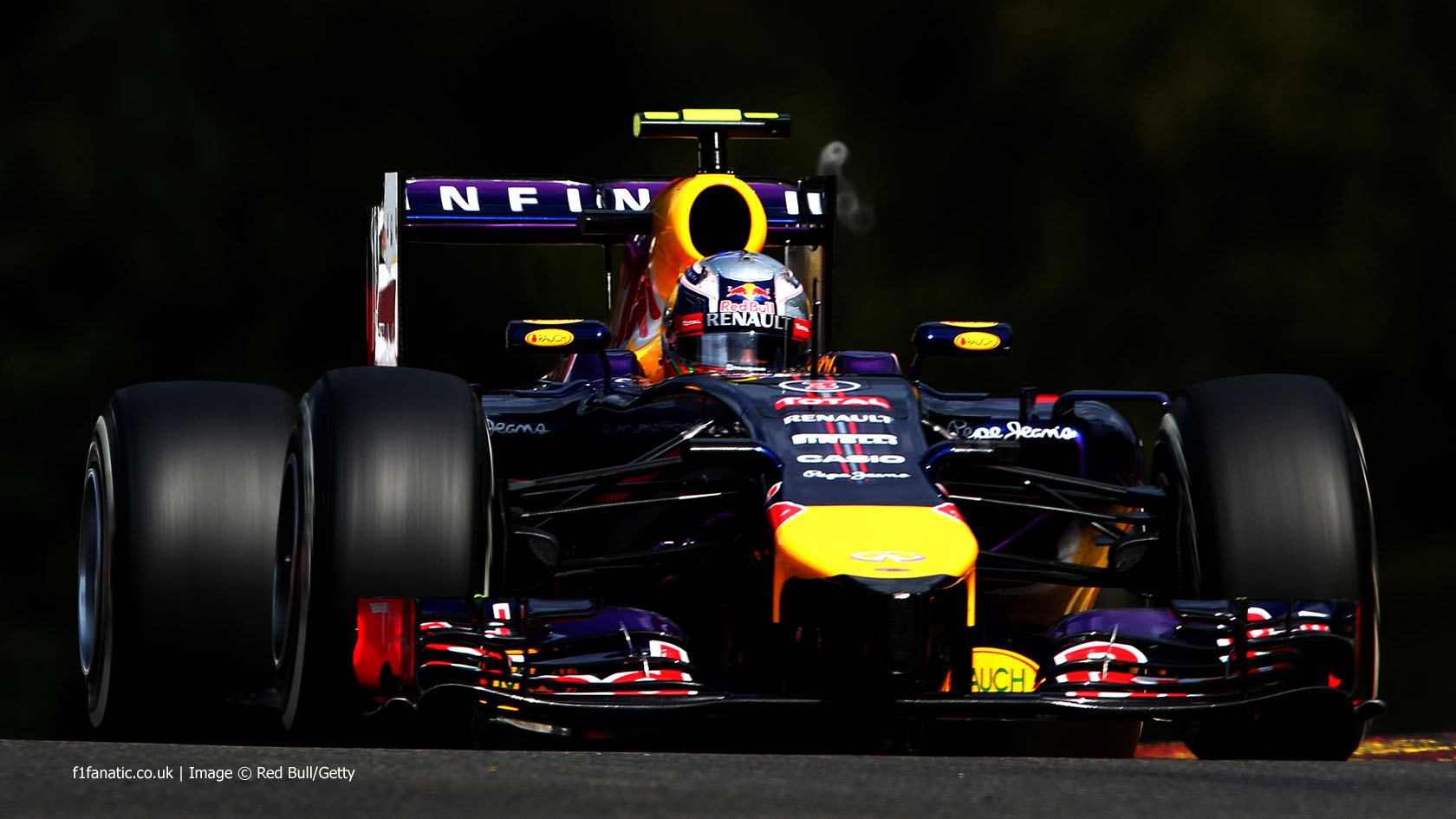 Daniel Ricciardo took his third win of the season at Spa after a dramatic Belgian Grand Prix which saw Lewis Hamilton retire after being struck by Nico Rosberg.

Rosberg recovered from a broken front wing to finish second and extend his championship lead to 29 points. Valtteri Bottas rounded out the podium in the Williams after a late scrap with Kimi Raikkonen.

There was drama before the race as when the formation lap began, Fernando Alonso’s Ferrari was still up on the jacks in fourth position. The team were able to get the car going before the entire field had passed, allowing Alonso to retake his fourth position, but with the Spaniard inevitably receiving a five second time penalty after the start.

At the start, Hamilton got the better start of the two championship rivals, cruising around Rosberg into the lead at La Source before Sebastian Vettel out-dragged the championship leader on the run to Eau Rouge. But when Vettel missed his braking into Les Combes attempting to take the lead from Hamilton, he ran through the escape road and allowed Rosberg back through into second.

Then came a moment that could possibly prove crucial in the battle of this year’s Drivers’ Title.

Rosberg immediately began to pressure Hamilton for the lead and tried a move around the outside of Les Combes on lap two, but as Hamilton moved across for the left-hander, Rosberg clipped his team mate’s left-rear tyre with his front wing, causing an immediate puncture to his rival and forcing Hamilton to cruise back almost five kilometres to the pits with a rapidly deflating tyre.

This left Rosberg in the lead, albeit with minor damage to his front wing, followed by Vettel and Alonso. Daniel Ricciardo passed Alonso for third on lap four, before passing his team mate for second when Vettel ran wide at Pouhon soon after. Valtteri Bottas passed Alonso for fourth in the DRS zone on lap eight.

On lap nine, Rosberg pitted from the lead, taking the opportunity to replace his broken front wing. As Rosberg rejoined behind Esteban Gutierrez’s Sauber, the Mercedes was struck by what appeared to be tyre debris which hooked around the car’s radio aerial and began flapping around right in front of Rosberg’s helmet.

Rosberg attempted to pass Vettel into the Bus Stop on lap 16, but locked up and lost ground to the Red Bull. This allowed Bottas to slipstream the Mercedes out of La Source and cruise past Rosberg in the DRS zone.

With Rosberg complaining of a vibration and losing time to the Williams and Red Bull ahead, Mercedes opted to pit the championship leader on lap 20 for a new set of Medium tyres. At this stage, Hamilton was down in 17th. But while Hamilton questioned whether the team should think about saving his engine, his engineer Peter Bonnington informed him that he was the one of the quickest cars on track.

Clearly much happier with his new tyres, Rosberg immediately set about catching the leaders, passing Button and Alonso in quick succession Ricciardo pitted from the lead on lap 27, resuming just over a second ahead of Rosberg, with Bottas pitting one lap later.

With the front runners having pitted, Ricciardo was once again out front, around 3.5 seconds ahead of Rosberg with Raikkonen third. Vettel and Bottas were now scrapping for fourth behind, with the Williams driver pulling a beautiful move around the outside of the Red Bull at Les Combes to take the position.

As Hamilton struggled to make any serious progress, Rosberg pitted for a third time on lap 35 for a set of Soft tyres in a bid to try and challenge for the win at the end of the race. Rosberg was immediately passed by Bottas in the DRS zone, but was able to re-pass the Williams into Blanchimont and set about trying to catch Ricciardo out front.

With almost no chance of scoring points, Hamilton was called in to retire with just over five laps remaining. Meanwhile, his rival was now eating into Ricciardo’s lead by seconds a lap, but with the gap standing at 11 seconds with four laps to go, it looked increasingly likely that Ricciardo’s third win of the season would be secure.

Behind the leading duo, there was an almighty scrap over fifth between Kevin Magnussen, Fernando Alonso, Sebastian Vettel and Jenson Button. Despite the pressure from three world champions, Magnussen was able to aggressively fend off first Alonso, then Button before Sebastian Vettel was ultimately able to slide past.

On the final lap, Alonso struck the back of Vettel’s Red Bull at the apex of La Source, damaging his front wing and forcing him to cruise around to the chequered flag in eighth.

But out front, Ricciardo duly held on to take his second consecutive win and third victory of the season. Rosberg crossed the line in second with Valtteri Bottas holding on to third for Williams.

Kimi Raikkonen recorded his best finish of the season with fourth, ahead of the battling pack of Vettel, Magnussen, Button and Alonso. Sergio Perez scored two points for Force India in ninth, while Daniil Kvyat rounded out the top ten for Toro Rosso.

Unfortunately, Andre Lotterer’s debut Grand Prix for Caterham ended almost as soon as it began after being forced to retire on the first lap with an engine problem.