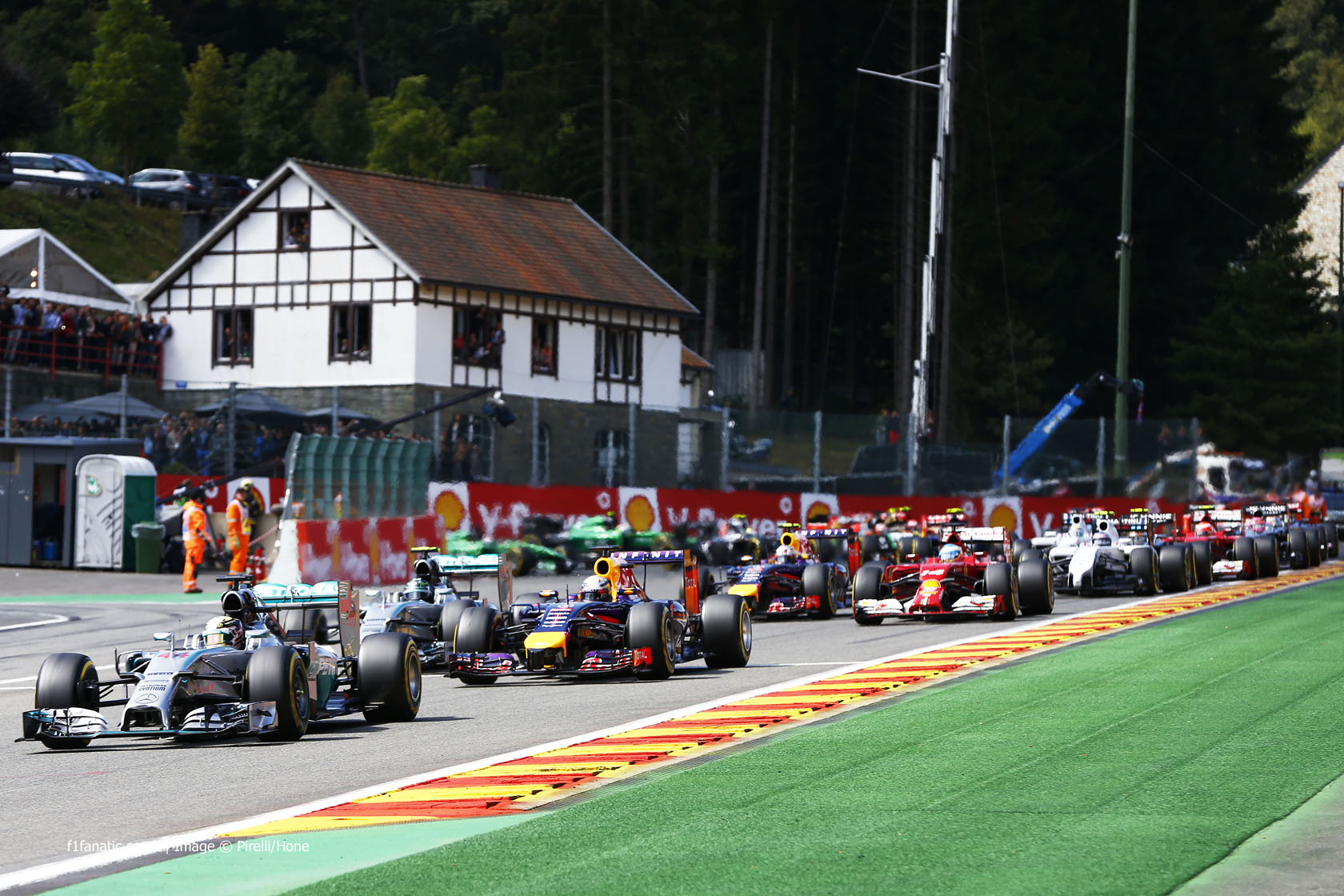 Sebastian Vettel – Despite missing second practice due to an engine problem Vettel qualified ‘best of the rest’ behind the Mercedes pair in third place. He got ahead of Rosberg at the start but his optimistic attempt to pass Hamilton at La Source didn’t pay off and dropped him behind Rosberg. He then made another mistake at Pouhon which allowed Ricciardo past. Dropping behind Raikkonen at the first round of pit stops did more damage to his race, but he emerged from a hectic battle with Alonso and the McLarens to take fifth.

Daniel Ricciardo – Had to settle for fifth in qualifying after almost losing control at Blanchimont as the track dried in Q3. He was on it in the race, however, slipstreaming past Alonso early on then taking advantage of his team mate’s mistake to claim second. Rosberg’s front wing change handed him the lead, but he made full use of the opportunity and treated his tyres carefully in the final stint to claim his third win. Nico Rosberg – Pole position number seven counted for little as he made a poor start, falling to third behind Hamilton and Vettel. He swiftly regained second place and attacked his team mate for the lead on lap two – rather too literally as it turned out. He then had to cope for a damaged front wing for his first stint, but after having it replaced at his first pit stop he was still in with a chance of winning. However a lock-up while battling Vettel proved costly – Bottas took the opportunity to overtake him and Rosberg had to make an early second pit stop, forcing him onto a three-stop strategy which left him three seconds shy of Ricciardo at the flag.

Lewis Hamilton – Was in contention for pole position but a glazed brake in Q3 meant he had to settle for second behind Rosberg. He was immediately into the lead at the start, but Rosberg was quicker around the end of the first lap and made his now-infamous bid to get past. Hamilton was blameless in the incident and came off by far the worst. But though his chances of gaining any points that afternoon were remote from that point on, he seemed a little too eager to throw in the towel. Fernando Alonso – Took an excellent fourth on the grid in the rain-hit qualifying session, splitting the Red Bulls. But it seemed his team had wrecked his efforts as several of them were still attending to his car after the 15-second signal was given at the start of the race. A five-second pit lane penalty was a surprisingly light sanction, though it dropped him behind Raikkonen, Bottas and Magnussen at the first round of pit stops. Was clearly ‘fouled’ by Magnussen on the run to Kemmel, though his attempts to pass the McLaren around the outside of Bruxelles assumed a level of co-operation Magnussen clearly wasn’t willing to extend, which ultimately cost him a place to Button.

Kimi Raikkonen – Said he made mistakes on his last run in Q3 which left him eighth on the grid. With Alonso needing to take his penalty and therefore better served by running long at his first pit stop, Raikkonen came in early as part of an aggressive two-stop strategy. He reaped the dividends, running quickly while out of traffic and only losing third place to Bottas with five laps to go.

Romain Grosjean – The pace of the Lotus was “much better than expected” according to Grosjean, but he lost part of his front wing when he was squeezed between Bianchi and Hulkenberg on the first lap, forcing him to pit. He got back into the race and was running 17th when he stopped for good. “We picked up some damage later on from debris on the track,” he explained. “We lost a lot of downforce as a result so we retired the car.”

Pastor Maldonado – Continues to exacerbate Lotus’s persistent technical problems with failures of his own. This time he at least confined it to practice, but needlessly driving with two wheels off the track for as long as he did clearly invited a crash. His engine failed shortly after the start. Jenson Button – Locked up on his Q3 lap which left him tenth on the grid. Overtook Massa soon after the start, but never looked like getting ahead of his team mate. He had a chance in the closing stages, but Magnussen firmly shut the door. However Button re-passed Alonso on the final lap for seventh, which became sixth after his team mate’s penalty.

Kevin Magnussen – Out-qualified his team mate and raced well against a trio of world champions. The only blot was an overly strong move against Alonso on the Kemmel straight, which deserved a penalty. The 20-second sanction had a strong effect, dropped him from sixth to twelfth.

Nico Hulkenberg – Tried to get through Q1 with one set of intermediate tyres but admitted he made mistakes on his final run which meant he failed to get to Q2 for the first time this year. However a strong start brought him within two places of Perez, which was where he finished. Having been 11th at the flag he was promoted into the points by Magnussen’s penalty.

Sergio Perez – Out-qualified Hulkenberg for only the third time this year. He raced with the McLarens but felt he took too much life out of his tyres doing so, and had to fend off Kvyat in the closing stages. Adrian Sutil – Believed 14th was the bet his car was capable of after spending much of the race stuck behind Massa’s Williams, which the Ferrari-powered car was no match for on the straights.

Esteban Gutierrez – Was very unhappy on Saturday after his qualifying was ended by yet another technical problem. He made it to the chequered flag, however, one place behind his team mate.

Jean-Eric Vergne – Said he could have qualified in the top ten but for a problem with his exhaust in Q2 – a frequent problem for Toro Rosso this year. In the race he felt his car was out-gunned on the straights – both Force India and Sutil passed him at the start. However he regained places from Sutil and Massa in the final stint, and Magnussen’s penalty left him one place short of the points. Needed more from his first race since Toro Rosso confirmed he won’t be driving for them next year.

Daniil Kvyat – Wasn’t happy with his car’s handling after qualifying but nonetheless started in front of Vergne. Spent much of the race trying to attack one Force India while fending off the other – Hulkenberg was less than four-tenths of a second behind him at the flag. Felipe Massa – Blamed traffic in Q3 for an indifferent lap which left him behind his team mate. He was badly compromised in the first first half of the race after picking up debris from the Rosberg/Hamilton collision, which the team did not remove until the second pit stop. Once they did he was much quicker, but it was too late for him to salvage any points.

Valtteri Bottas – Passed Alonso on lap eight and led a lap before his first pit stop. Took advantage of Rosberg’s struggles with Vettel to demote the Mercedes driver during his second stint, though Rosberg ultimately got back ahead once more via the pits. The Williams’ strong straight-line speed helped him pass Vettel and Raikkonen easily in the final stint to take third – his fourth podium finish this year. Jules Bianchi – When conditions are tricky in Q1, Bianchi is the driver you look out for, and once again he did not disappoint, putting his Marussia in Q2 for the third time this year. But he picked up a puncture in his first-lap contact with Grosjean which ruined his race. He was classified despite stopping with a gearbox problem five laps from home, prior to which he had inevitably been lapping quite a bit quicker than Chilton.

Max Chilton – With Bianchi falling by the wayside, Chilton upheld team honours by passing Ericsson two laps from home. But he very nearly wasn’t in the car at all – Marussia announced on Thursday he would be replaced by Alexander Rossi. They then reversed their position during the first practice session, by which time Chilton had already issued a contradictory statement claiming he had voluntarily given up the seat so allow them to sell it. Not a shining moment for him or the team.

Andre Lotterer – Parachuted in to take over Kamui Kobayashi’s seat despite not having driven an F1 car in over a decade. However his World Endurance Championship and Japanese Super Formula experience stood him in good stead, and he duly out-qualified Ericsson by almost a full second, although he had the benefit of some new parts. His race lasted just one lap however before the car came to a stop – possibly because he had hit a kerb too hard at Blanchimont.

Marcus Ericsson – “We were in the wrong place on track all the time so I didn’t get a single clean lap,” he said after qualifying last. Managed to get ahead of Chilton at the start and nearly stayed there until the end, but the Marussia driver eventually slipped by.

Who was the best driver of the 2014 Belgian Grand Prix weekend?