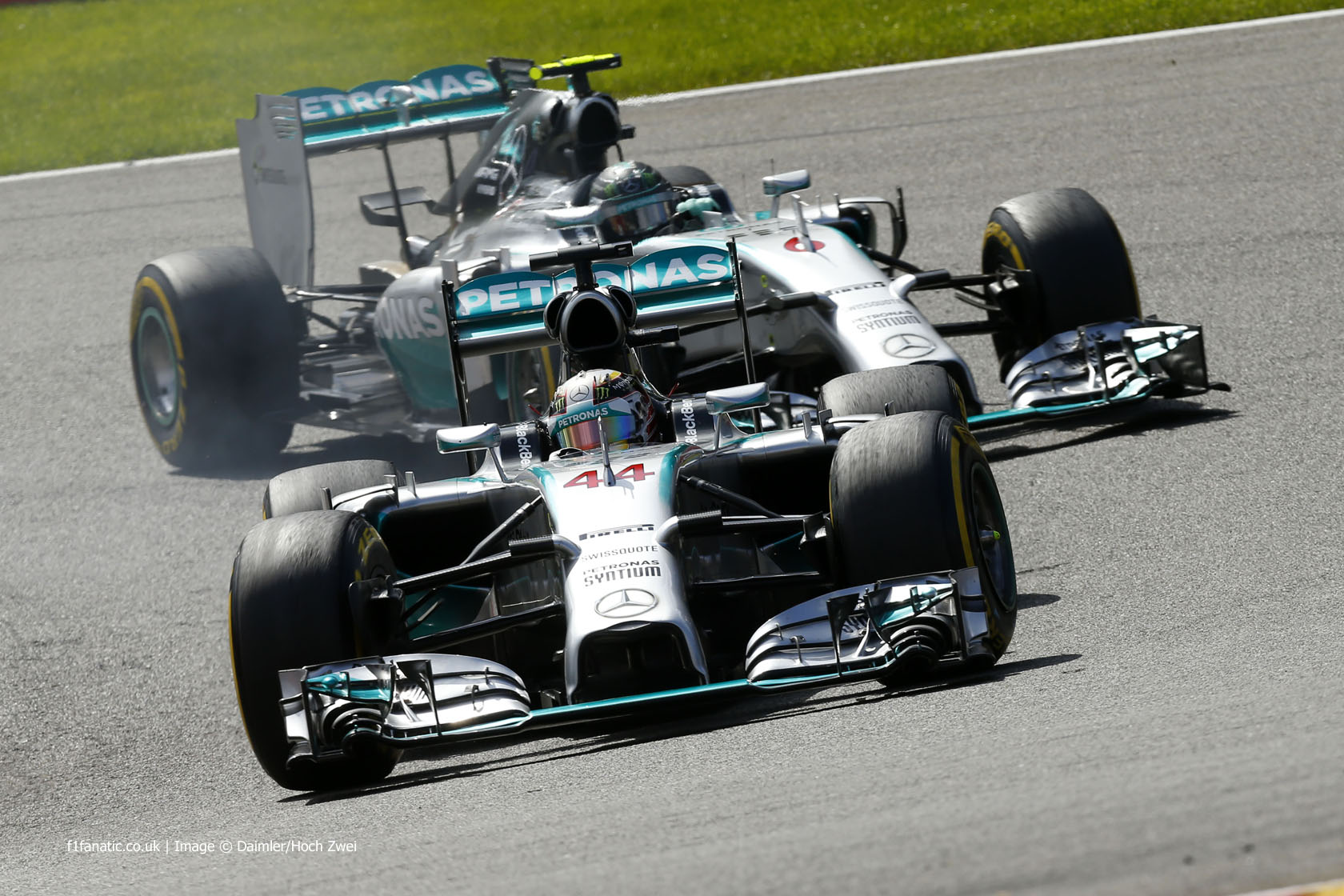 The on- and off-track events at Spa-Francorchamps have left Mercedes with a external public relations nightmare and an internal diplomatic crisis.

Relations between their championship-contending drivers Nico Rosberg and Lewis Hamilton hit a new low after the pair made contact in the Belgian Grand Prix. If this is allowed to go unchecked, it could open the door for one of their rivals to beat them to the championship.

Such as Daniel Ricciardo, who has now beaten them to victory in half of the last six races. The surprising performance of the Red Bull in Spa-Francorchamps was a further indication they are narrowing the gap to Mercedes and may be a greater threat on tracks which suit them even better.

Mercedes have the reassurance of a comfortable points lead but no team will tolerate their drivers costing them points, as happened to them in the last two races. By hitting Hamilton at Les Combes Rosberg cost the team a likely 25 points, and before that in Hungary Hamilton’s refusal to obey an order to let Rosberg through may have cost them as many as 10 points.

Following the Hungaroring incident Rosberg complained that “Lewis didn’t let me by, although he was ordered to do so” while Hamilton pointed out that “if I’d let him past when they asked me he would have beat me”. This left Mercedes’ management to plot a narrow course between justifying their tactics and not coming down too hard on either driver.

They eventually did so by saying Rosberg “never got close enough to Lewis to make the move” – although there had been no indication at the time Hamilton’s order was conditional on how close Rosberg was – and they were “ultimately comfortable with the decision Lewis made to hold position”.

It’s not difficult to imagine this might have rankled with Rosberg. Hamilton later noted that in a team meeting last Thursday it was clear Rosberg was still unhappy about the Hungary affair.

Mercedes find themselves having to walk an even thinner line following the events of Spa. One on hand, Rosberg has clearly broken one the inviolable law which exists within any team, that you do not crash into the other car. On the other, they need to address Hamilton’s eye-raising claim on Sunday that Rosberg caused the crash deliberately to make a point.

Fortunately for Mercedes the FIA continues to show no appetite for getting involved. Wolff quickly played down Hamilton’s claim on Sunday, and the FIA has since made it clear that in a case of Wolff’s word against Hamilton’s they believe the team manager. Recall also that following Rosberg’s accidential-but-beneficial error at Mirabeau, Hamilton remarked he had seen something revealing in Rosberg’s data.

But while the FIA’s indifference is a relief for Mercedes, soothing the tensions between their drivers will still take a tremendous amount of skill. The problem is they are limited in how far they can go to impose order on their two drivers. Once the cars are out on track the pit wall can shout and scream as much as they went but if Rosberg and Hamilton want to duke it out, it’s going to happen.

Although Rosberg’s error cost Hamilton more dearly in Belgium, were Mercedes to take any direct action against him it would surely be seen as a step too far. Forcing him into a number two role for the next race, limiting the performance of his car somehow or even substituting him for another driver – all these would be unprecedented in this context.

More realistically, Mercedes could act to limit the scope for aggression between their drivers during the races, at least until the constructors’ championship is decided and both are out of reach in the drivers’ championship.

An obvious approach would be to institute a ‘no overtaking after the first corner’ rule, as other teams have done in the past. This might be interpreted by some as favouring Rosberg over Hamilton, who has not been on pole position since the Spanish Grand Prix in May, but realistically he has as much chance of getting pole for the remaining seven races as his team mate does.

When Ross Brawn left Mercedes last year he said he had put everything in place for the team to cope without him. The next ten days will reveal whether the new leadership has got what it takes.

How should Mercedes respond to the fall-out at Spa? Is it time to limit the racing between the two drivers? What should Wolff tell Hamilton and Rosberg? Have your say in the comments.

283 comments on “How can Mercedes defuse the Hamilton-Rosberg row?”