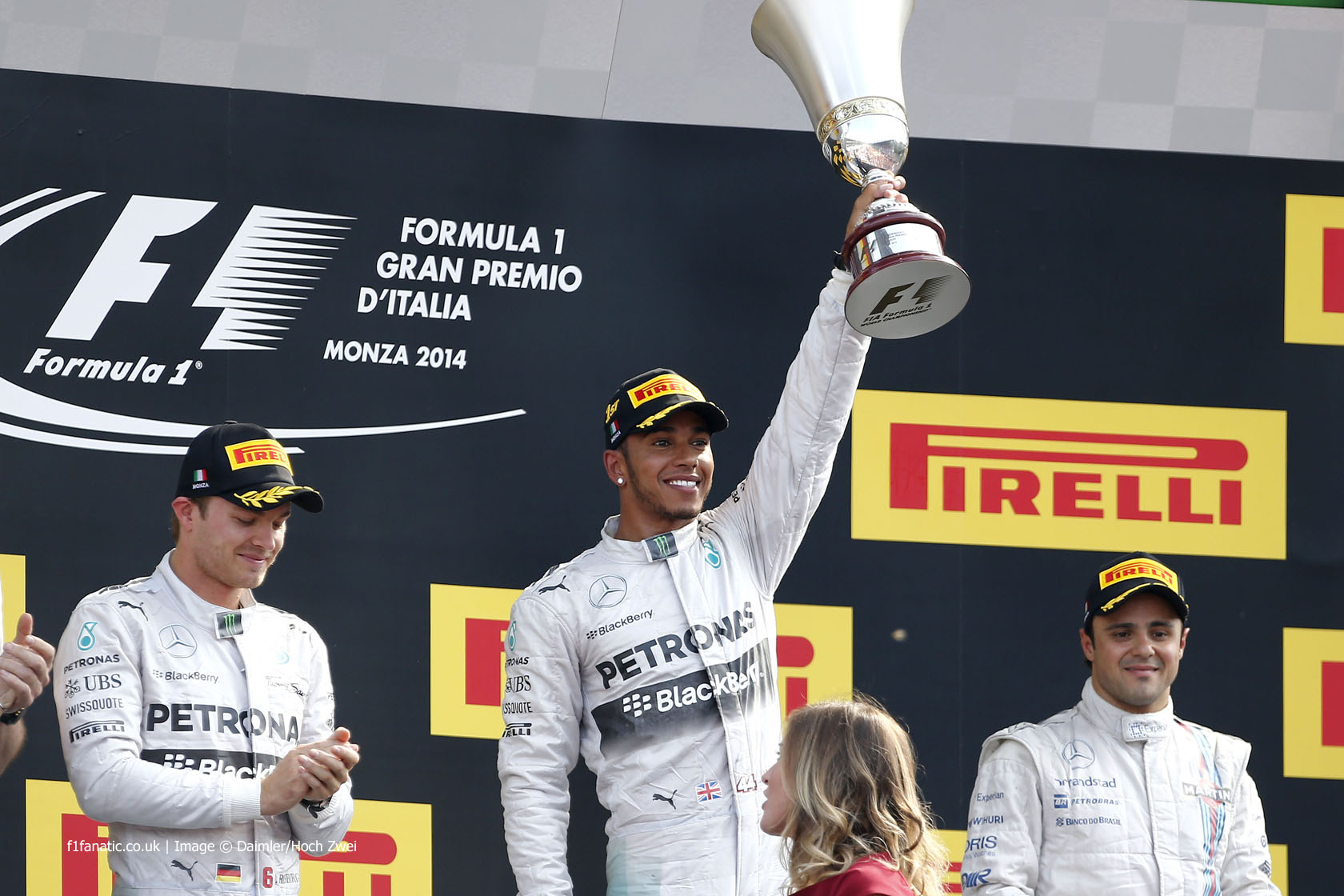 After two weeks of recrimination about the collision between Lewis Hamilton and Nico Rosberg in the Belgian Grand Prix, their latest encounter could hardly fail to feel like an anti-climax.

And so it proved. The Italian Grand Prix was decided when Rosberg, under pressure from his fast-closing team mate, locked a brake scooted into the run-off area at the Rettifilio chicane.

It was a significant moment in the context of the championship battle, however. With Hamilton once again having to chip away at his team mate’s point lead, today he demonstrated that even with a handicapped start he can still show Rosberg the way home. Although Mercedes have performance to throw away, reliability is one area where they are regularly found wanting. Before the race began Hamilton had already lost an hour of running on Friday due to an electrical problem and a gearbox glitch confined Rosberg to the garage on Saturday morning.

Shortly before the race again another gremlin struck, this time on Hamilton’s car, leaving him unable to selected his Race Start mode which optimises the car’s settings for a quick getaway.

“We never practice a start like that where you don’t have the launch sequence in,” he said afterwards. “I had no idea really what I was supposed to do, so I just floored it and hoped for the best.”

His start wasn’t great, but it could have been worse. While his title rival motored off into the lead Kevin Magnussen made a superb getaway from the third row, and passed Felipe Massa for second place at the chicane.

Hamilton tucked in behind them, no doubt grateful that the other Williams of Valtteri Bottas had made an even worse start than he had. Having started third, he was down to eleventh by the end of the first lap. McLaren had expected to come under pressure from their row three starting positions, so it came as no surprise to see Magnussen’s second place swiftly under attack from Massa and Hamilton.

They both got by on lap four – Massa using the DRS zone on the start/finish straight, Hamilton motoring by on the short blast from the Roggia chicane to the Lesmos.

Massa’s Williams proved a tougher task for Hamilton and it took him five more laps to find a way by. The move was a credit to both drivers, who picked their way side-by-side through the Rettifilio chicane, looking nothing like the pair who couldn’t stop crashing into each other three years ago.

Rosberg was finding it hard enough to get through the chicane without another car alongside him. On the eighth lap he felt the car wasn’t going to stop in time, and not wishing to lock up his brakes he took to the run-off area.

Before the race the drivers had been warned that if they went off there they had to weave their way through the polystyrene blocks on the Tarmac run-off strip. Rosberg took care to do just that – which was also the sensible thing to do from a point of view of his race strategy, as his team mate explained afterwards.

“There was only one risk and that’s really if you lock up, that’s generally why you’ll see drivers going [straight] on at the first corner,” Hamilton explained, “because they don’t want to try and make the corner, lock up because then they have to convert to a two-stop [strategy] which is much slower.”

Weaving between the blocks costs time as well, however, and Rosberg’s lead was almost halved to two seconds. And despite having taken more life out of his tyres while making his overtaking moves, Hamilton was able to chip around two-tenths of a second per lap out of Rosberg’s lead – the kind of margin he had over his team mate all weekend long.

As usual Mercedes gave strategic priority to the leading driver, and that meant Rosberg. He came in for his single stop on lap 24, Hamilton the next time by. The pursuing driver gained a tenth in the pits but lost more than that because Rosberg was the first onto fresher rubber. But that soon became academic.

Hamilton’s race engineer Peter Bonnington issued the usual advice that by dropping out of Rosberg’s slipstream he could look after his tyres and attack at the end of the race. But Hamilton felt the time to strike was now, and he went for it.

His out-lap was seven-tenths of a second quicker than Rosberg’s and Hamilton gained the same amount of time on his first flying lap. At the start/finish line Hamilton was within DRS range and the tension was building on the Mercedes pit wall.

Then, for the second time, Rosberg went too deep at the chicane and had to take to the escape road. That handed the lead, the victory and a vital seven-point swing in the championship fight to Hamilton.

Bottas and Ricciardo fight to the front Aside from a brief lock-up late in the race Hamilton’s lead never looked threatened from that moment on. Massa also enjoyed a secure hold on third place thanks to his team mate’s troubles, but the fight for the remaining points positions was fierce.

As at Spa, Bottas wielded the Williams’ straight-line prowess to excellent effect. Nico Hulkenberg, Kimi Raikkonen, Sergio Perez and Fernando Alonso all fell victim to him in the first stint. He consolidated most of those position gains with his pit stop, but had to retake Perez afterwards.

That done, he spent 11 laps battling Magnussen, and having got his nose ahead at one point was eased onto the run-off area at the Rettifilio by the McLaren driver. Magnussen was later given a five-second penalty for his trouble, and though it could be justified under the rules it was a tough call.

Bottas eventually passed Magnussen for good on lap 37, and three laps later reclaimed fourth from Vettel. Though Massa was 20 second up the road and out of touch, Bottas kept up a quicker pace over the remaining laps.

Given the performance Bottas had shown on Friday it was a disappointment his race had been spoiled at the start. Over the last 16 laps he lost just 1.6 seconds to Hamilton, though of course the Mercedes driver was conservatively-minded at this point.

Another of this year’s stand-out drivers, Daniel Ricciardo, also impressed by working his way forward after a poor start. He ended the first lap one place behind Bottas and finished there, thanks to Red Bull’s strategy of leaving his pit stop until late.

Ricciardo had the distinction of setting the highest top speed seen in F1 for some time – 362.1kph (224.9mph), 21kph higher than last year’s maximum – as he overtook both McLarens and Perez in the space of five laps.

But his move on his own team mate was a touch of brilliance, notwithstanding Vettel’s eight-lap-older tyres. Approaching the Roggia chicane Ricciardo feinted right as if he had backed out of the move – then sent his RB10 screaming up the inside to claim fifth place. That was the last decisive move at the front. Behind Vettel, Magnussen crossed the line in seventh but the three drivers behind him all knew they would move up a place once his penalty was applied.

That would have included Daniil Kvyat as well, who had latched on to the rear of Raikkonen’s Ferrari in the dying laps. But as the penultimate tour began a brake failed on the approach to the Rettifilio, and only the Toro Rosso driver’s incredible reactions kept his car from spearing into the Ferrari or the barriers.

Kvyat limped home in 11th, followed by Hulkenberg’s wounded Force India and Jean-Eric Vergne, who had started the race nine places in front of his team mate.

Pastor Maldonado brought his Lotus home in front of the Saubers. And Kamui Kobayashi capped an impressive return for Caterham by seeing off Jules Bianchi’s Marussia – Max Chilton having left the other car in the Roggia gravel trap on lap five. The Italian Grand Prix weekend highlighted three important points about the championship battle within Mercedes. It is clear their reliability woes are from from solved and could yet prove decisive – three significant problems hit their two cars during the event.

Hamilton gave a reminder that even on one of the most straightforward tracks from a driving point of view, he can locate the last few tenths of a second, hundredths even, that Rosberg cannot.

And it illustrated how aware Rosberg is of the importance of bringing the car home and piling up the points.

He was gifted an golden opportunity to tighten the screw on his team mate in the championship – and he squandered it. But with half-a-dozen races left, Hamilton could lead Rosberg home in the same fashion at the next three events yet would still trail him in the points table.

The points situation is clearly on Rosberg’s side, and his ever-cautious approach shows he is well aware of that fact. When Chilton’s car was being recovered he was quick to point out to his team how much he’d backed off for the yellow flags, anxious to avoid a penalty.

Rosberg’s performance today may have inspired little confidence in his ability to beat Hamilton in a straight fight on the track, it showed he knows he can still finish ahead in the championship.