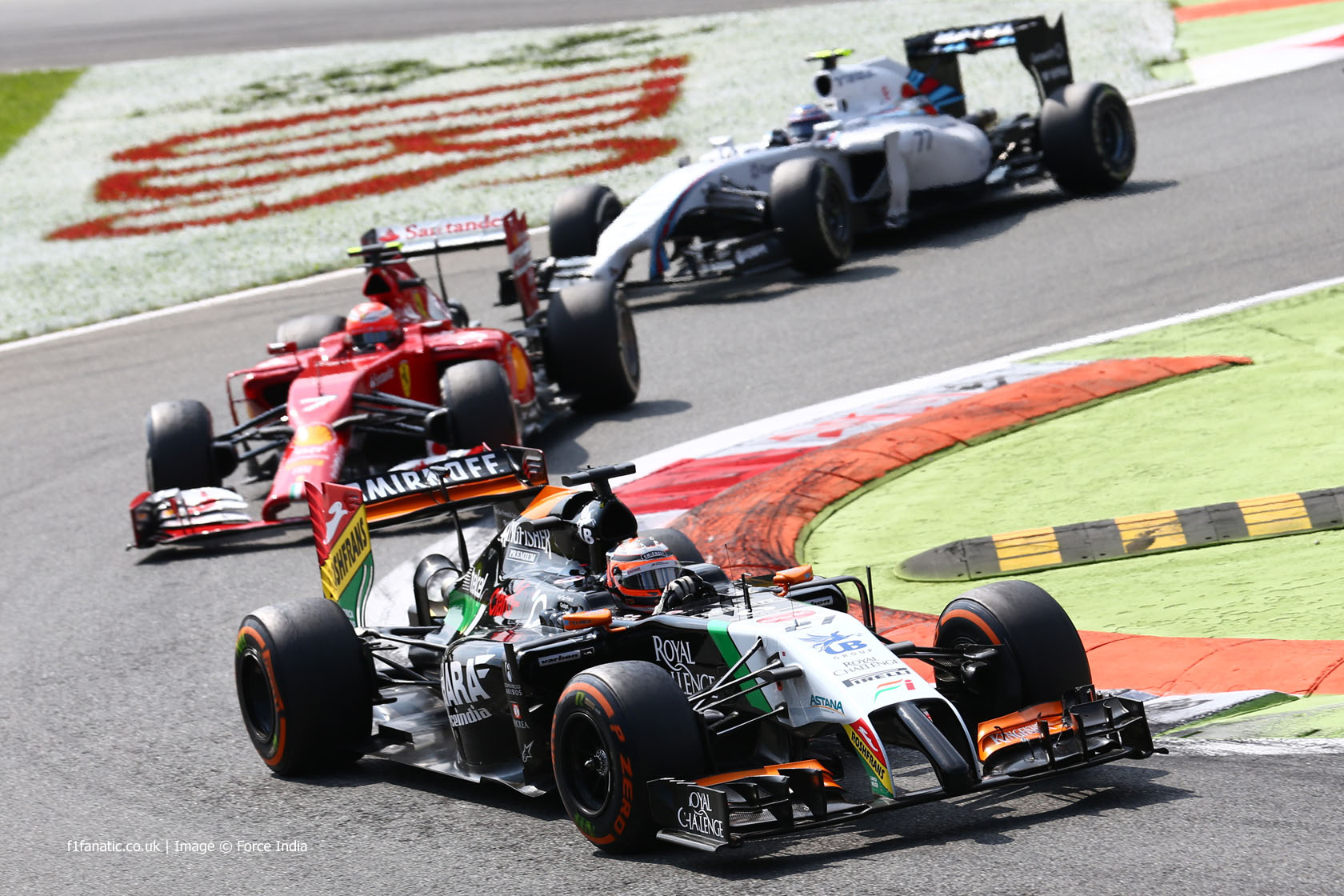 After a disappointing race Nico Hulkenberg revealed his team had discovered damage on his car which “affected the performance badly”.

Stefano Domenicali was in the paddock for the first time since April, when he resigned as Ferrari team principal.

@LewisHamilton really cool&friendly.Left circuit on his bike without any bodyguards. Real human NO SUPERSTAR ATTITUDE pic.twitter.com/XCmEZ8oluJ

Alex Lynn and Jolyon Palmer made important steps towards winning the GP3 and GP2 titles respectively, while Sergio Canamasas was black-flagged in the GP2 race after some dangerous driving.

'@TheDeanStoneman heads home @alexlynnracing in an exciting GP3 encounter at Monza. Hope we get action like that this afternoon

Epic bouncebackability from @JolyonPalmer this weekend. A championship defining weekend for the Brit. Gutsy driving all the way.

Talking point once again sadly however will be the disgraceful driving of one driver. Time to hand down a proper penalty.

Nico Rosberg’s lead was halved on lap nine, as he slalomed around the polystyrene blocks at the first chicane. A repeat, twenty laps later, would prove more costly, gifting the lead to Lewis Hamilton.

Rosberg did exactly what drivers were told to do if they went off at turn one. #F1 pic.twitter.com/IlO7PNPNxT

Just like on his way to a podium finish here two years ago, Sergio Perez showed impressive awareness of the position of his front wing. Here he retook eighth from former team mate Jenson Button.

Having been behind all weekend, Dan gets Seb again. Fooled him into thinking he was giving up on the move, then divebombed him. #sensational

Wow Kvyat nearly had the mother and father of all accidents there. A hide-behind-the-sofa moment. #F1

Classy response from @nico_rosberg to the jeering crowd, telling them in their own tongue they create a great atmosphere. #F1

Already astonishing suggestions that Rosberg's error was made on purpose as part of his pay-back for the Spa clash.

Even @charlie_whiting came to check it out!!! #F1 #Monza #ItalianGP pic.twitter.com/GGT1lBVqZr

Fantastic to see so many passionate fans flooding the track (safely) after the end of the race! True passion! pic.twitter.com/fJlKl2d69R

Can't see how Magnussen got a penalty in Monza if Rosberg-Hamilton in Spa was considered a racing incident, btw. Many here agree, too

@willbuxton Yeah. I felt it go. Turned around to punch whoever had it, and it had already been passed off into oblivion.

And while taking this photo of @MassaFelipe19, my other camera was cut off my shoulder…… thieving low life c**ts. pic.twitter.com/IZkdw2Xmzv

Toto and Susie Wolff had reasons to celebrate after their teams occupied the top four positions for the second time this season.

Monza's copy of God Save the Queen had good use today – wins for Stoneman, Palmer and Hamilton. Not bad

Two images from the World Feed worth noting – the grid graphics overlaid onto the grid, this worked well I thought pic.twitter.com/xhxD2zBl7X

Didn't notice this at the time (pic via @f1broadcasting). pic.twitter.com/gFne2I8urq Feels like they only do these because they can, no purpose.

Max Chilton crashed out of the race early on, recording only his second retirement in Formula One. But at least he did not take his team mate with him this time.

Gutted to be out so early at such an awesome track, just made a mistake pushing after overtaking the Lotus. Lesson learnt!

.@MassaFelipe19 I am really happy. We did the best we could. Monza is a special podium, and to hear the fans sing my name was amazing.

Very disappointing Race! We found damage which affected the car's performance badly. Not much i could do. Will fight back in 2 weeks!!

Gracias. En dos semanas Singapur. A prepararlo a tope. Thanks. In 2 weeks Singapore. Ready to fight back. pic.twitter.com/nFpjkXGHQ0

Honey badger had a lot of fun today. He enjoyed his meal 😋