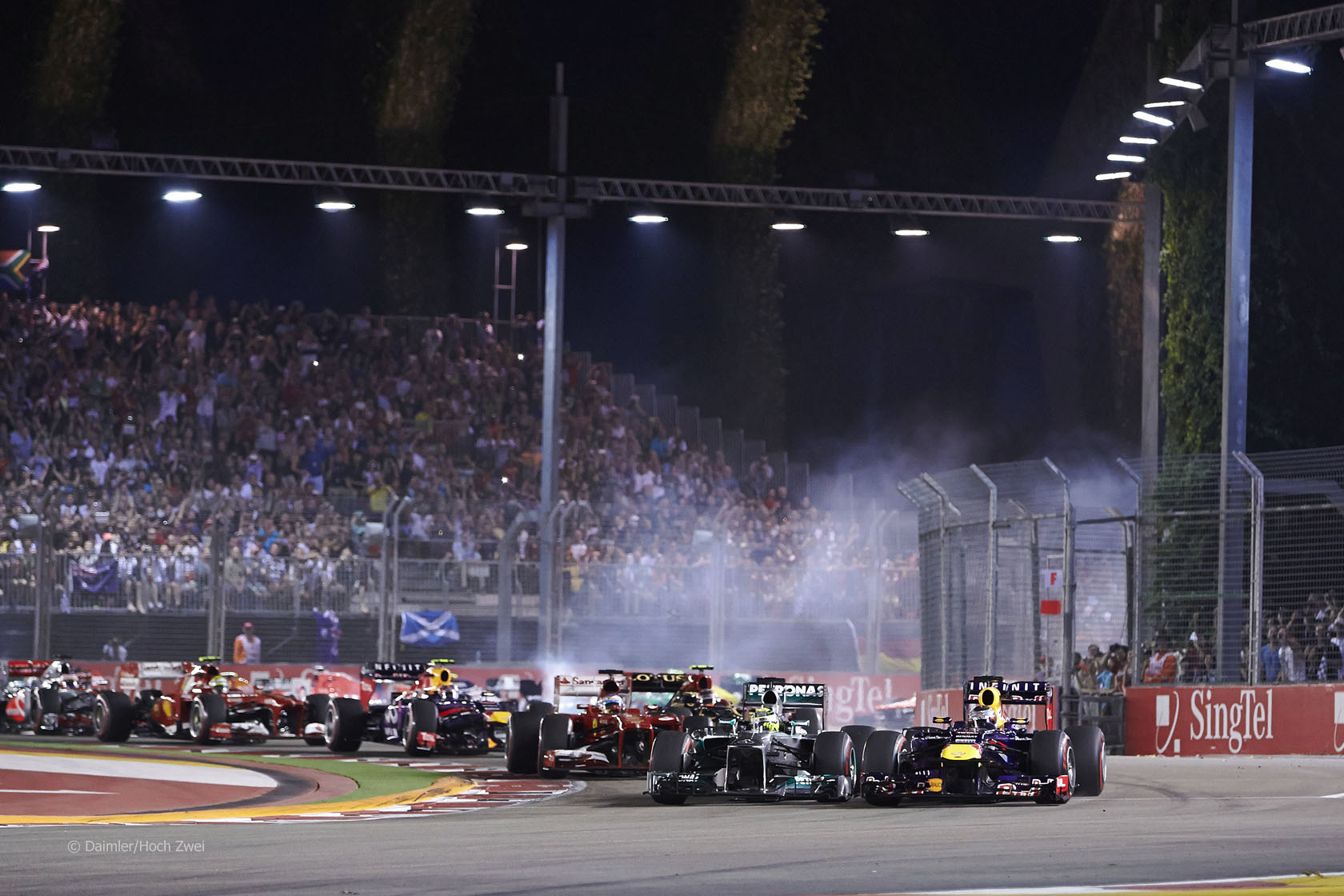 At the end of practice, Nico Rosberg’s best lap time of the weekend was just two-thousandths of a second faster than Lewis Hamilton’s.

In qualifying the pendulum swung almost imperceptibly. Pole position went to Hamilton – by seven-thousandths of a second. This on a circuit with one of the highest lap times of the year.

The 2014 championship contenders are heading into their closest fight of the season. Hamilton needs to keep chipping away at his team mate’s 22-point advantage and can ill-afford a fourth no-score.

But Rosberg knows from last year he can beat Hamilton to the first corner – and that could be the key to victory. On a dusty street circuit starting off-line is normally far from ideal. But the Singapore track operators work diligently to keep the grid clean.

This year as last, Nico Rosberg will start from second place on the ‘dirty’ side of the grid. “Last year I overtook Sebastian at turn one,” he recalled, “so it’s definitely possible to win from here”. To do that, however, he’ll need to make sure he doesn’t lose the position at turn three as he did last time.

It will be crucial sprint to the first corner for the two Mercedes drivers, for not only is overtaking very difficult around the track, but the lead driver will have the benefit of the team’s optimum strategy.

The Mercedes drivers may not have the fight entirely to themselves this time. A threatening pair of Red Bulls line up immediately behind them, and this weekend’s surprise package – the Ferraris – are also well-placed to exploit any problems for the three-pointed star.

And hot, bumpy Singapore is exactly the sort of venue that will expose any vulnerability. Hamilton knows that well – he was struck down with a technical problem while leading at this track two years ago.

Significantly, all the drivers will be able to receive information from their engineers on how to perfect their starts – something the FIA originally intended to ban from this weekend. The last two Singapore Grands Prix have been won using two-stop strategies. But Pirelli believes it will be quicker for teams to pit three times on Sunday, running the super-soft tyre for the first three stints.

“It’s going to be all about managing the tyres and I learned some good lessons in my long runs yesterday,” said Rosberg. However those lessons may not apply so well as the track was doused by a downpour shortly after qualifying finished, meaning another reset to the grip levels the F1 cars had been built up. And, unlike in recent seasons, there are no GP2 cars to accelerate the rubbering-in process.

Rosberg may have more to worry about than his team mate – particularly if the Red Bull drivers make better starts. Daniel Ricciardo says the team are even closer to the championship leaders’ pace than they expected to be.

“Coming into the weekend we thought that if we could be within two or three tenths of Mercedes then there was a realistic chance to stay with them in the race,” he said. “We actually ended up closer to them than we thought in qualifying.”

“If the start goes okay then it’s about trying to be smart and doing something with the strategy.”

A three-stop strategy may be fastest on paper but the appearance of the Safety Car could wreck those plans – and it has been required at least once during each of the six previous occasions this race has been run.

However a Safety Car period would give the teams some assistance with another of this race’s biggest challenges – fuel consumption. The stop-start nature of the track means this is one venue where the 100kg fuel limit will be especially tough, and the opportunity for a few slower laps behind the Safety Car would certainly be welcomed by some.

Can Red Bull or Ferrari take the fight to Mercedes in Singapore? Who will win the all-important sprint to turn one?

Share your views on the Singapore Grand Prix in the comments.