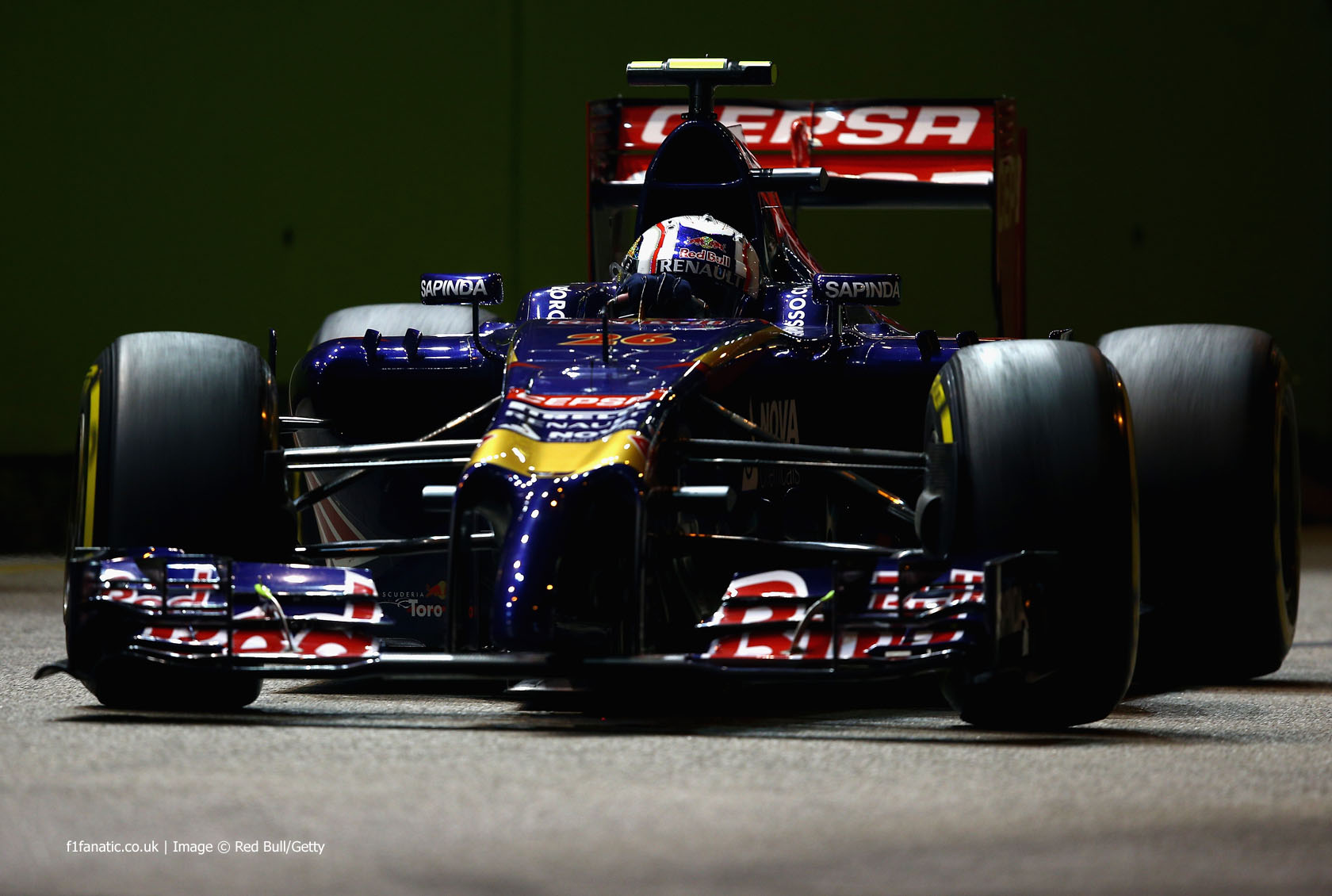 A broken drinks bag made it a very tough race for Daniil Kvyat, Kevin Magnussen played down the extent of his “burns” and Red Bull shielded their screens from the press.

Here’s Sunday at the Singapore Grand Prix in Tweets.

#F1 Renault working on Maldonados engine without any cover. You don't see pics like that very often. pic.twitter.com/jt4V9F0gcj

Just noticed Gutierrez has his spectacles on. Obviously doesn't drive with them on. Explains a lot. #F1

I must say I do not miss the the scream of the old V8 engines at all. I love the note of the new power-train. #f1

@rohitntu @f1fanatic_co_uk @nicktabram Been trackside for all the previous Singapore GP's and this year is underwhelming.

15 mins until the grid opens. Maybe one last glance before jumping in the car? ;-) #SingaporeGP pic.twitter.com/KiSVsSYYOA

Mechanics at work in Rosberg's cockpit moments before the start. #F1 #SingaporeGP pic.twitter.com/J1T0BuJqgw

.@nico_rosberg has nowt but his gear shift paddles to play with right now: steering wheel not fully functional. This has to be some drive…

Rosberg is at least attempting to adjust his steering wheel settings, even if they aren't working. #F1 #SingaporeGP pic.twitter.com/mw2OMGPNDN

The car refused to get out of neutral – plan had been to stall and restart, but it wasn't to be #F1 #SingaporeGP #RadioSinga

Lewis stopped a full 30 cm past the marks pic.twitter.com/L79i3w6RoS

18 minutes behind the Safety Car for a bit of debris. And it'll take even longer next year with standing restarts. #F1 #SingaporeGP

An increasingly angry Kvyat is shouting "I need to stop, I need a drink, I'm dying here". Mustn't have got it fixed. #F1 #SingaporeGP

Thats why I hate DRS

"You're doing good Marcus, prepare for the fight with Bianchi" the Swede is told over the radio. 7 laps remaining… #SingaporeGP #F1

Lap 59/61 | Jules is unable to fight due to brake issues. He's forced to drop back from ERI.

Sebs broken monkey seat. The team haven't seen it as the cars in scrutineering. But it was failed by the first stop pic.twitter.com/TxjXmXSQT8

What just happened?! Never give up. Double points. Brilliant drive by @SChecoPerez making the most of a really difficult race.

That was a tough race! Surely the hardest earned point I've ever had. Fun weekend as well though. Now really looking forward to Suzuka!

BTW some newspapers say I had burns and had medical treatment for it. That's a bit exaggerated, I was just hot and sweaty! :) #notdead

What do you do after winning #SingaporeGP? Start talking about Suzuka of course! @LewisHamilton still on it… pic.twitter.com/bmdeSZbFJ8

Such a shame we didn't get a result today, felt like P6 was on the cards. Great job by the whole team in tough conditions, mega pitstops….

The organisers here put on a real show for fans, so the 'experience' goes way beyond just the race.

Very important points for the team @clubforce wich put us in the best season in the history of team! And more coming, very proud of you guys

No booing on the podium this time, either.

Tough race today trying to defend others with very worn tyres in the end, also prblm with the steering. Last lap collapse meant no points..