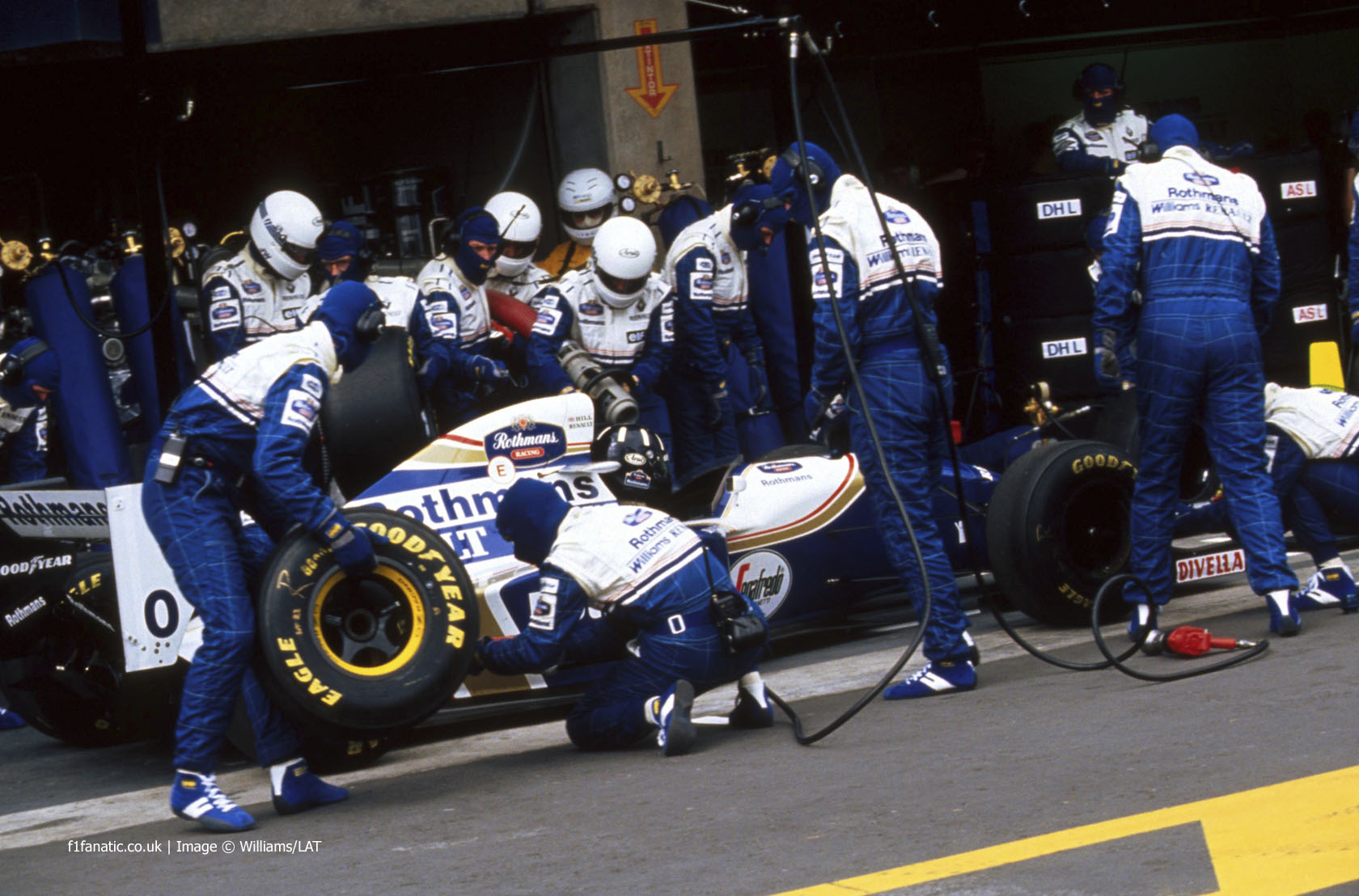 Damon Hill took his third consecutive victory in the extraordinary 1994 season to move within one point of the championship lead with three races remaining.

Michael Schumacher was powerless to stop Hill reducing his margin to almost nothing as he served the final race of a two-event ban following his British Grand Prix infraction.

Hill won the Portuguese Grand Prix, held on this day 20 years ago, after he sprang an opportunistic pass on team mate David Coulthard to win the race – at the very corner where his Williams had been flipped upside down just 48 hours earlier.

A scare for Hill

Ten years since its introduction to the Formula One calendar, the Estoril circuit was no longer considered up to modern grand prix standards in the wake of the Imola tragedies.

The Portuguese track’s penultimate corner, a left-handed flick which the drivers approached at high speed, was the main focus of their concern. As had been the case at other circuits the inability to extend the run-off at that point meant the approach to it had to be slowed down.

This was achieved by adding a corner which was so narrow and slow it seemed to belong at Monaco rather than on a purpose-built road circuit. It was named Saca Rolhas – ‘corkscrew’ – but was no equal of the famed corner on America’s Laguna Seca circuit which shared the same name. The corner was so tight the drivers even raised the possibility of having a permanent yellow flag at the corner during the race, to prevent drivers from attempting overtaking moves while going through it.

Among those who were caught out by it on the first day of practice was Eddie Irvine. Already under fierce scrutiny following his three-race ban earlier in the year and under a suspended sanction after triggering a race-stopping shunt in the previous round, Irvine’s latest error was an innocent one with unfortunate consequences.

As Irvine’s Jordan arrived at the corner pointing the wrong way Hill, who was pressing on after an earlier spin, arrived on the scene. He tried to dodge around the Jordan, which was still rolling backwards, but the pair touched wheels and the Williams was pitched into the air, flipping onto its roll hoop.

Given the importance of the weekend for his championship chances this was an unfortunate time for Hill to discover what it felt like to roll a racing car. He was unharmed, but the marshals’ botched attempt at recovering his car did more damage to it than the incident itself.

Benetton continued to struggle in Schumacher’s absence. At a track which should have suited the nimble B194 far better than Monza had Jos Verstappen only scraped into the top ten and JJ Lehto was 14th.

Hill’s aerobatics on Friday and deteriorating track conditions on Saturday meant he could only manage second. Gerhard Berger continued to demonstrate Ferrari’s resurgence with their third pole position in five races – at a track where he had crashed out in embarrassing circumstances when his active suspension failed 12 months earlier.

With Nigel Mansell due to return to Williams at the next round, David Coulthard was driving his last race for the team, and backed up Hill in third.

Mika Hakkinen benefited from an uprated Peugeot engine to put his McLaren fifth ahead of Alesi and Ukyo Katayama, who again impressed for Tyrrell in qualifying.

For the beleaguered Lotus team there was no repeat of their Monza heroics. The team had gone into administration following the previous race and Neil Cooper, the man charged with determining the team’s future, was keeping an eye on their progress from the paddock.

Although Johnny Herbert still enjoyed the benefit of the revised Mugen-Honda engine the car’s woeful aerodynamics limited him to 20th on the grid. Philippe Adams was back in the second car in place of Alessandro Zanardi, who watched from the pits as Adams struggled to a place on the back row, nearly two seconds off Herbert’s time, though admittedly with the older engine.

Despite having beaten the Williams pair to pole position, Berger was concerned about the race pace of the FW16Bs. But as Hill made another indifferent start Berger held his lead and was chased into turn one by Coulthard.

The Williams pair kept the Ferrari in their sights in the opening laps, and just as it seemed as though a contest for the lead was developing, Berger was out. His hopes of repeating his German Grand Prix vanished when a transmission shaft failed on lap eight and his 412T1B coasted to a halt.

Coulthard now led, pursued by Hill, and they remained in that order until Coulthard made his first pit stop on lap 17. Hill came in one lap later, and that handed the lead to Jean Alesi .

With the Williams drivers planning to pit three times, the two-stopping Alesi stayed at the front of the field until lap 22. And when he came in it wasn’t the Williams drivers who took the lead, but Rubens Barrichello, the Jordan driver heading the field for the first time in his career until he pitted three laps later.

Coulthard regained the lead but this also proved short-lived. As they arrived at Saca Rolhas for the 28th time Coulthard, preoccupied with backmarkers ahead, didn’t see Hill diving for the apex of the corner and was forced to surrender the lead to his team mate.

From that point on Hill was never headed. Alesi removed himself from contention on lap 39 when he lunged at the lapped Simtek of David Brabham from impossible range at turn three, putting both out. Unfathomably, the stewards blamed Brabham for the collision and handed him a one-race ban, suspended for three races.

Hill was nearly eliminated by the other Simtek – Jean-Marc Gounon carelessly cut a path across the track after recovering from one of his two spins. It was a troubling moment for Hill, as Coulthard was still close behind.

Unlike at Monza, Coulthard’s Williams did not fail him at the last and he secured his first podium finish at his eighth attempt. Hakkinen joined the Williams pair on the podium, while team mate Martin Brundle never regained the place he lost to Verstappen at the start and came home sixth behind the Benetton and Barrichello.

Irvine and Christian Fittipaldi were next and Olivier Panis followed them across the line. But the Ligier driver became the second driver after Schumacher to fall foul of the new restrictions on plank wear, and was disqualified.

When Schumacher last saw the chequered flag four weeks earlier at Spa, his victory had given him a 35-point margin in the title race. But his disqualification from that race, and suspension from the next two, had given Hill a vital chance which he took full advantage of.

The pair were now set for a three-race scrap for the title. Meanwhile Williams had taken the lead in the drivers’ championship, and could count on the experience brought by Nigel Mansell to aid them in the decisive final rounds.