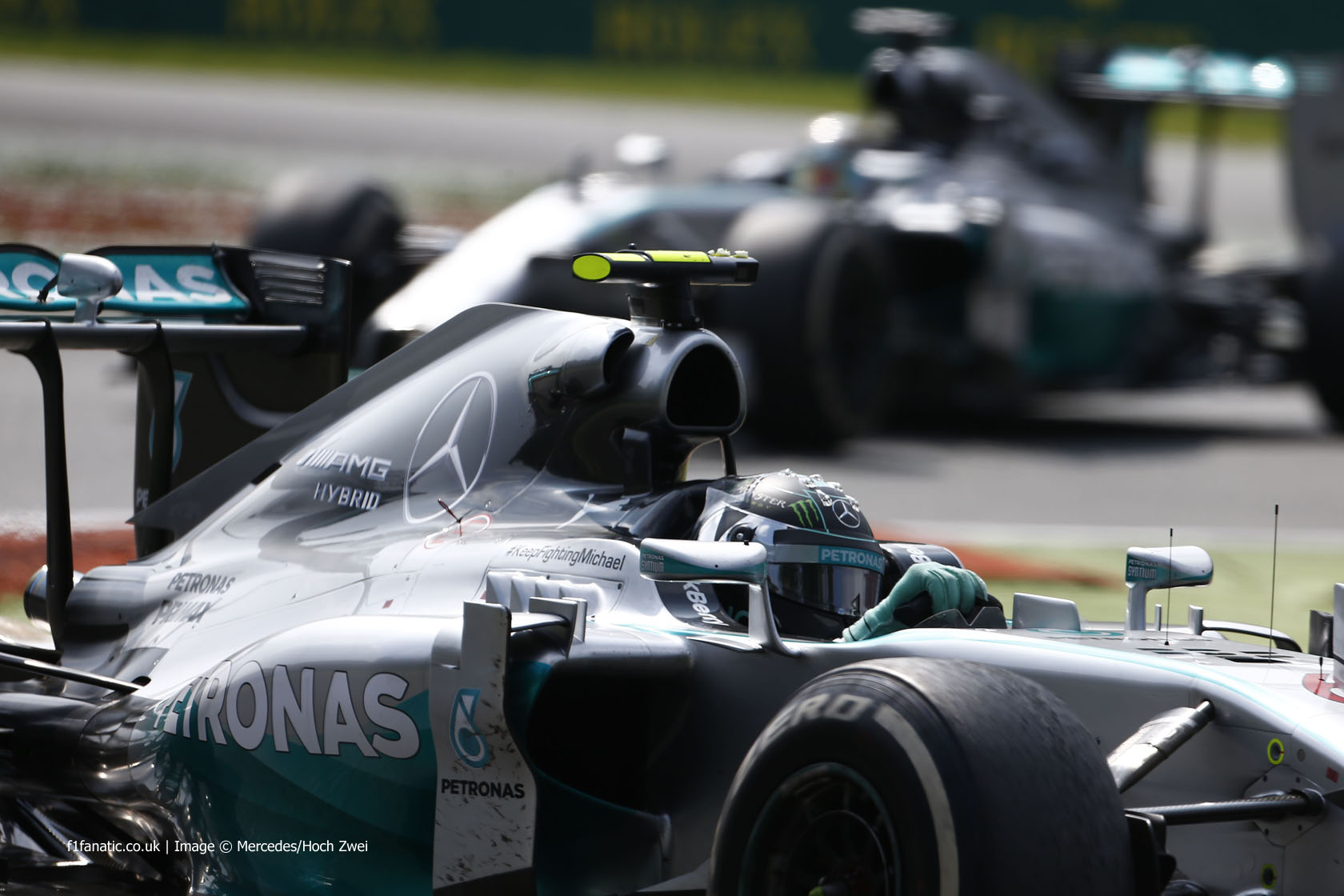 As the championship battle between Lewis Hamilton and Nico Rosberg enters its final skirmishes, their Mercedes team are poised to collect their first championship silverware of the year.

With a 174 point advantage over Red Bull, if the Mercedes out-score their rivals by 41 points on Sunday they will leave the Suzuka circuit as world champions. And even if they don’t do it this weekend, the outcome of this year’s constructors championship looks a foregone conclusion.

But there can be few more fitting venues for them to seal such an achievement than at the superb Suzuka circuit – scene of some of the most memorable championship-winning moments in the sport’s 64 year history.

Alain Prost, Ayrton Senna, Damon Hill, Mika Hakkinen, Michael Schumacher and Sebastian Vettel have all secured motorsport’s most coveted prize at the famous Japanese circuit. But while neither Hamilton nor Rosberg will be able to secure the drivers’ title this weekend, a no-score would hurt either of them badly at this stage in the championship fight.

As a venue that is so often mentioned when discussing the truly great circuits of the modern era, Suzuka plays host to one of the most anticipated races of the season by both fans and drivers alike.

Originally built as a Honda test track, Suzuka’s unorthodox yet challenging layout has remained relatively untouched since its debut on the world championship calendar in 1987.

With a mix of high-speed sweepers, long corners and fast straights, Suzuka will quickly reveal any deficiencies in a car’s performance, as well as demanding absolute precision from drivers over its 5.8km length.

The demanding corners mean that tyre wear and fuel consumption are both critical factors. With this in mind, Pirelli have opted for their two hardest compounds – the Medium and Hard – for this weekend.

Not for the first time, the teams arrive at Suzuka with a threat of severe weather disrupting proceedings. It’s unclear at this stage whether Sunday’s race will be affected by Typhoon Phanfone, but it would not be surprising if drivers are forced to tackle some difficult conditions at some point during the event.

Singapore demonstrated that Red Bull will not resort to team orders to maximise Daniel Ricciardo’s slim chances of snatching the drivers’ title from the Mercedes pair as long as Sebastian Vettel remains mathematically in the hunt himself.

Sitting 60 points shy of Hamilton’s lead, Ricciardo is aiming to be within 50 points by Abu Dhabi in order to have a mathematical chance of a world title win in the final race.

Suzuka has been a happy hunting ground for Red Bull in recent seasons and with aerodynamic grip key around this circuit, they may be eyeing another podium appearance this weekend. Mercedes could win the constructors’ championship for the first time in their history in Japan this weekend – and do it with four races to spare.

But it’s a bit of a long shot: The only way Mercedes can put a lock on the title this weekend is if their drivers finish in first and second places and Red Bull fail score no more than two points (ninth place).

If they don’t do it in Suzuka they are still very likely to do so well before the final round of the championship. And that could have a bearing on how much leeway they give their drivers to race each other – especially if their other rivals drop out of contention in the drivers’ title battle.

While Ferrari strive to reclaim third place in the constructor’s championship from Williams, rumblings over Fernando Alonso’s future with the team are increasing in volume.

But while Alonso can be relied upon to consistently maximise performance, team mate Kimi Raikkonen may be set for a strong weekend having achieved a breakthrough in car set-up at Singapore.

“Every corner was a guessing game before, but now I can trust what will happen and I can drive my own way,” says Raikkonen.

“When you get things like that it makes things a lot easier and you’re on a lap time straight away.”

After yet another frustrating weekend in Singapore, Romain Grosjean will be looking forward to returning to a circuit where he had arguably his best race last year. Despite his late retirement from Singapore, Jenson Button will likely be in high spirits this weekend as Japan is a race he describes as his second home grand prix.

Team mate Kevin Magnussen is also anticipating his first ever visit to Suzuka. “Suzuka is one of those legendary circuits – I can’t wait to get out there,” he says.

“I’m really looking forward to driving onto the track for the first time and tackling the famous corners you always hear about – the Esses, the Degners, then Spoon and 130R.”

Singapore was a crucial race for Force India in their quest to beat McLaren this season. An eight-point haul helped the Silverstone-based team to jump ahead of their more illustrious rivals into fifth place in the constructor’s championship, and break the team’s season points scoring record in the process.

If Force India are to beat McLaren, they will need to maximise the points this weekend as Suzuka has not always proven the most fruitful of circuits for the Silverstone team.

Esteban Gutierrez could not hide his frustration in Singapore when an electrical problem robbed both him and the team of possibly their best chance to finally score points in 2014.

Sauber are running out of races to achieve that elusive points finish, but will be spurred by the fact that Suzuka has been a strong venue for them in recent years.

“In the last few years, the Sauber F1 Team has produced some of its best races at Suzuka,” says the team’s head of track engineering, Giampaolo Dall’Ara. “This is a source of pride, and keeps us motivated in working hard for results that so far this season we haven’t been able to achieve.”

Formula One history will be made at Suzuka this weekend as 17-year-old Max Verstappen will shatter the record for youngest ever participant in an F1 event when he steps into Jean-Eric Vergne’s Toro Rosso during Friday practice.

With the son of former Benetton and Arrows racer Jos Verstappen already confirmed for a race seat in 2015, it’s little surprise to see Toro Rosso eager to give their newest rookie some track time in an official session.

Vergne’s sixth place finish in Singapore would not have hurt his quest to find a drive in 2015, but he knows he can’t afford to rest on his laurels and must target another impressive finish in Japan.

Singapore was always likely to be a more difficult circuit for Williams. Back at a track where they can extract the benefit of their car’s aerodynamic efficiency, the FW36s should be more competitive.

After a race of mixed fortunes in Singapore with Valtteri Bottas dropping out of the points in the final two laps, Williams will aim for a greater haul in Japan with the arrival of a late-season upgrade package.

Having finished fifth in Singapore, Felipe Massa hopes to be running closer to the front in Suzuka. “We have good momentum at the moment and our car will hopefully be better than in Singapore,” he says. With every passing race, Marussia edge closer to securing a remarkable – and potentially lucrative – ninth place in the constructors’ championship. Although Sauber have plainly been quicker than them all year, Jules Bianchi’s opportunistic result at Monaco has kept Marussia ahead so far.

Whether Marussia can stay there will depend more on whether we have any races with a high number of retirements before the season ends – and whether they or their fellow Ferrari engine customers can capitalise on that chance.

For what could well be the final time, Kamui Kobayashi will provide his local fans with a Japanese driver to cheer for during their own grand prix.

Suzuka holds very special memories for the Japanese driver, having secured his one and only podium appearance at his last race here in 2012.

“Unfortunately, this year I have to admit that I won’t be fighting for a podium,” he said, “but I will do my best to reward my fans with a strong performance in order to thank them for their enormous support”.

20 comments on “Mercedes can clinch team’s title in Japan”