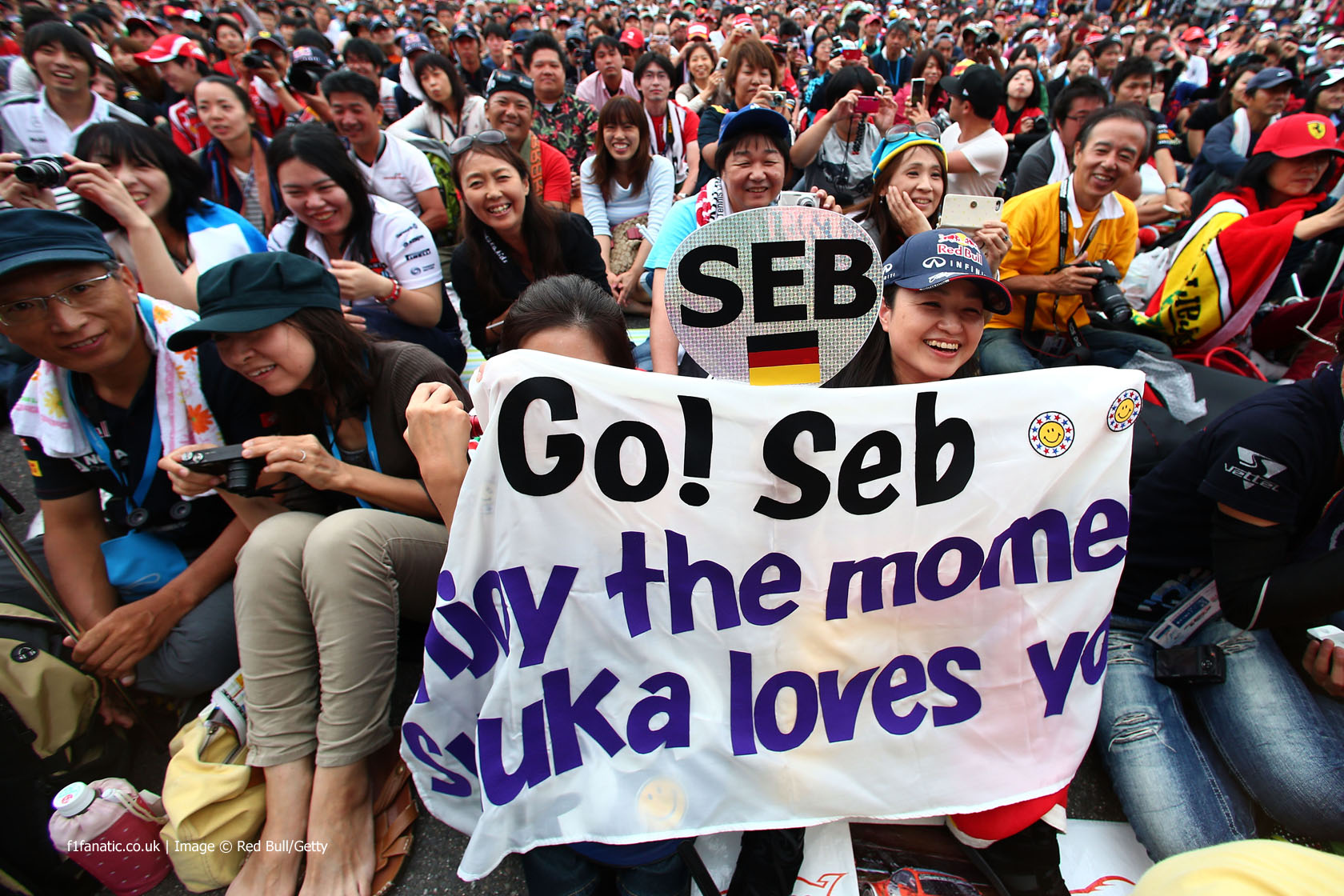 Unsurprisingly, today’s talk at Suzuka was dominated by the news on the 2015 driver market.

Sebastian Vettel’s departure from Red Bull, Daniil Kvyat’s promotion, and rumours of where Fernando Alonso’s heading were the major talking points. But at the end of the day thoughts returned to the ominous weather forecast for tomorrow.

Here’s the story of Saturday at the Japanese Grand Prix on Twitter.

Before final practice began, Red Bull surprised the Formula One world with the news of Vettel’s impending departure.

I keep thinking back to the look in Vettel’s eye (atop the Monza podium) when Alonso was showing him the massed scarlet ranks of the tifosi.

All credit to Red Bull for backing their junior programme. @Dany_Kvyat has had an excellent rookie season.

No hard feelings at @redbullracing, as Vettel chats with Horner and Marko ahead of FP3 #JapaneseGP #F1 pic.twitter.com/08ZWkZCTxw

With Vettel at Ferrari, Alonso can only go to McLaren. Mercedes keep Hamilton/Rosberg. ALO could even take a year out with a 2016 contract

Doesn’t look particularly good for Vettel. This is the first hard season he’s had at Red Bull and he’s straight out of the door. #f1

Seb VETTEL has no manager and obviously doesn’t need one, having demonstrated world championship capability in both wheeling and dealing.

Great strategy from Red Bull to get the Vettel news out ASAP this morning. Making life uncomfortable for other affected parties! #F1

@willbuxton Don't you mean it's caught you lot out??

Red Bull no longer playing down the fact that Ricciardo has the edge on Vettel this year. Funny that. #F1

What great news to wake up too! Reigning #GP3 Champion @Dany_Kvyat will drive for @redbullracing next season! Congrats champ :-) #F1

Today’s been one of those ‘Wow’ moments in #F1. The whole world was watching ALO, waiting for news, then VET pops up with a bombshell.

Horner got a text after dinner last night from Seb saying “can I see you in my room” That’s when he told Horner he was leaving. #skyf1

21:45 in the Suzuka Circuit Hotel – the text message Vettel sent to Christian Horner which left the RB boss certain he was off to Ferrari.

Great insight into how Vettel broke the news of his departure from Red Bull. Apparently he was in tears when he told Christian Horner.

Track action, especially in the morning session, was somewhat overlooked given the day’s developments.

Esteban Gutierrez of @SauberF1Team has a massive moment but avoids the barriers at 130R #JapaneseGP #F1 pic.twitter.com/L3xwaBJQQI

Stella to Alonso: “Just to confirm there is absolutely nobody behind you.” #F1 #JapaneseGP

Matassa: “Happy to box?” Kvyat: “Yes I am.” Suspect he was already pretty happy when he go in the car… #F1 #JapaneseGP

Hamilton skates off at turn one and is into the barrier! #F1 #JapaneseGP pic.twitter.com/eRzxFy2dd1

I didn't think screens were allowed at GPs, hiding the Merc gearbox in a gearbox cartridge concept "@AlbertFabrega: pic.twitter.com/XOSqr0NZjm"

There was a lot of bunching up at the chicane as drivers prepared for their final attempts in Q2.

Kvyat: “They were going so slow that I was catching anti-stall, it’s unbeliable.” #F1 #JapaneseGP

With rain expected in the race, Red Bull focused on Sunday performance.

Christian Horner confirms to Sky that RBR has moved towards a wet set-up for today, so the car is slower on the straights than usual

Hamilton: “Back of my seat is getting a bit warm.” #F1 #JapaneseGP

Alonso has outqualified both Ferrari drivers.

Front row lock-out,#F1 silly season in full swing, typhoon on the way… again, someone tell us this sport is boring! pic.twitter.com/aZx5fJ8P3P

Japanese fans really are some of the most dedicated around. 6pm and the stands are still full. #JapaneseGP pic.twitter.com/UwS4bRn45g

Lots of action around the paddock today, nearly more than on track. Qualy was tough for us but if it rains we should be better for the race

Check this out #f1 – UBIMET Path of Typhoon Phanfone and timings relative to #JapaneseGP – it’s gonna be tight! pic.twitter.com/mWhx6xqoAJ

Meet the team chaired by Ron Dennis. For some reason we have a lot of people here ! pic.twitter.com/wHQ3z7M60T

Today has been a very strange day for me…..

Lovely sunset over Suzuka tonight, though everyone is asking what the skies will bring for the #JapaneseGP tomorrow pic.twitter.com/uu21hNM4eM

Much trepidation as the Paddock braces itself for #Phanfone, but racing aside we have everything crossed for Japan over the coming days 🇯🇵 🙏

(EDITOR'S NOTICE: No Photoshop filters or any other dodgy tools have been used in creation of this image) #JapaneseGP pic.twitter.com/Ke7fjzPfg9