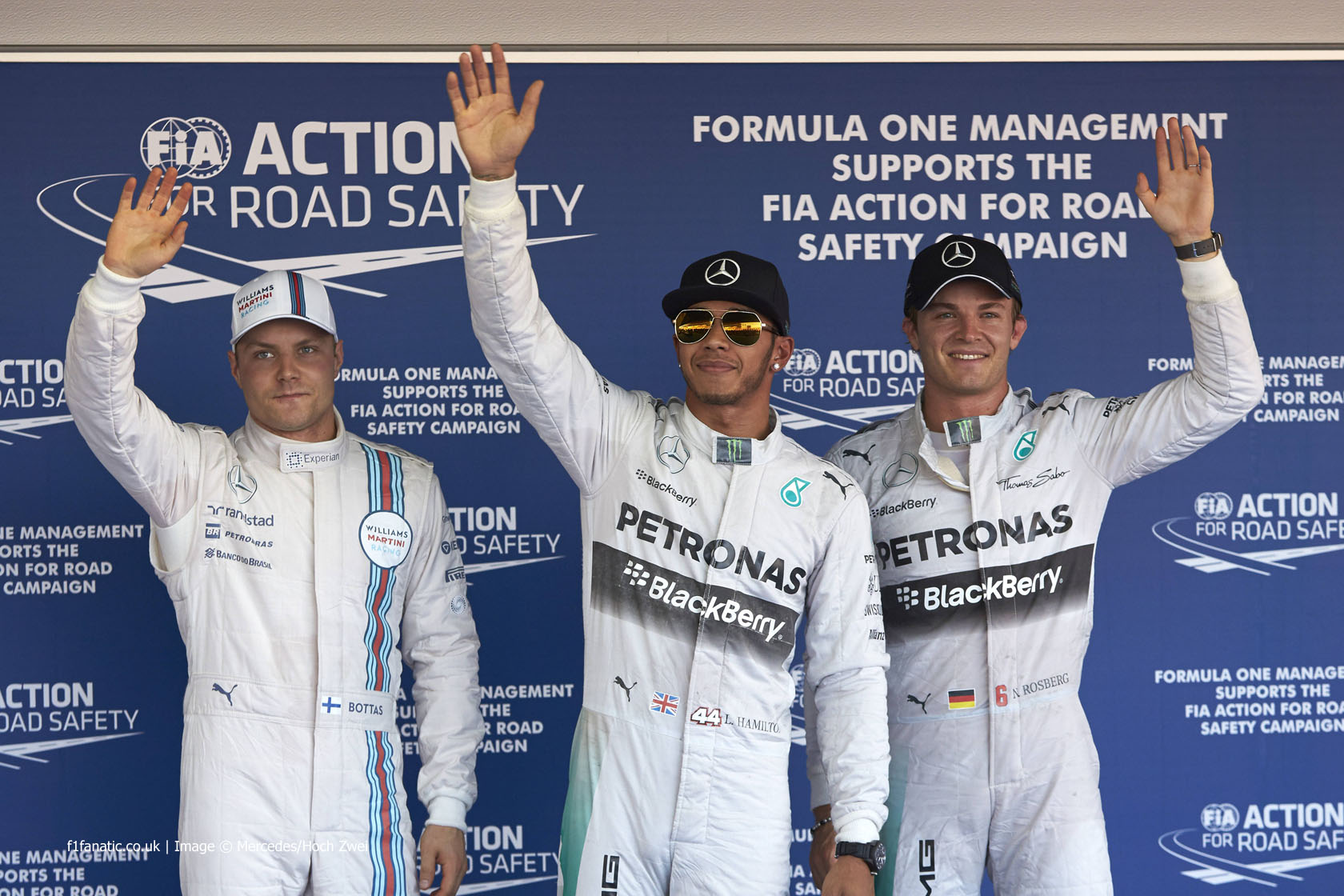 Lewis Hamilton led another Mercedes one-two in qualifying for the Russian Grand Prix – but it was nearly very different.

Valtteri Bottas was on course to claim a shock pole position until the Williams driver slipped up at the end of his final lap.

However his team mate Felipe Massa dropped out at the start of qualifying with a fuel pressure problem.

With a single pit stop looking the likely strategy for tomorrow’s race and the need to save rubber therefore reduced, all the teams used the soft compound tyre during the first part of qualifying.

The Mercedes pair exchanged the fastest times as usual, and although Hamilton ended up with the fastest time he set it after his team mate had already returned to the pits. Hamilton’s best of 1’38.759 left him just three-hundredths of a second off his best effort from qualifying.

Marussia’s decision to only enter one car for the race meant five drivers were eliminated in the first phase of qualifying. Surprisingly, they included Felipe Massa.

Williams waited until the end of the session to send their drivers out, after which they discovered a fuel pressure problem on Massa’s car. Unable to do anything about it in the time remaining, Massa simply had to persevere, but missed the cut by half a second.

Marcus Ericsson was the fastest of the quintet eliminated at the start, with the sole Marussia of Max Chilton in last place.

Rosberg improved his best time from Q1 by a tenth of a second as the second part of qualifying began, but Hamilton was even quicker from the start, producing a 1’38.338 to lead the early running.

While Hamilton returned to the pits after that first lap, Rosberg pressed on. But his second effort still left him over a quarter of a second shy of his team mate.

Valtteri Bottas in the sole remaining Williams continued to demonstrate the pace they showed in practice, being the only driver besides the Mercedes pair to set a sub-99 second lap time.

The only Mercedes-powered cars which failed to make it into Q3, apart from the already-eliminated Massa, were Force India pair. The Ferrari drivers made it in, Kimi Raikkonen posting a late improvement to ninth place.

Jean-Eric Vergne claimed the last place in Q3 with a lap of 1’39.929. But Sebastian Vettel failed to make the cut, falling short of the Toro Rosso driver’s mark by just over a tenth of a second.

Rosberg took the initiative as Q3 began. The Mercedes drivers waited until the others had left the pits before joining the track, and Rosberg’s first effort put him ahead by two-tenths of a second of Bottas.

Hamilton had a scruffy first lap and was only seventh after the first runs. But his next run was clean and a 1’38.647 put him back ahead of Rosberg. His team mate was the next driver to cross the line and this time it was his turn to slip up, and had to settle for second.

With their final runs Hamilton found a further seven-hundredths of a second, and Rosberg improved to end the session two-tenths of a second off his team mate. But that wasn’t the end of the battle for pole position.

Bottas was flying, setting the fastest times through both of the first two sectors. But at the end of the lap a brief lock-up at the penultimate corner and a scruffy exit from the last turn left him third. “Rears started to slide at the end,” he reported on the radio.

Daniil Kvyat produced the best qualifying result of his career so far at home, followed by Kevin Magnussen who will take a five-place grid penalty for a gearbox change.

100 comments on “Hamilton on pole as flying Bottas slips up”