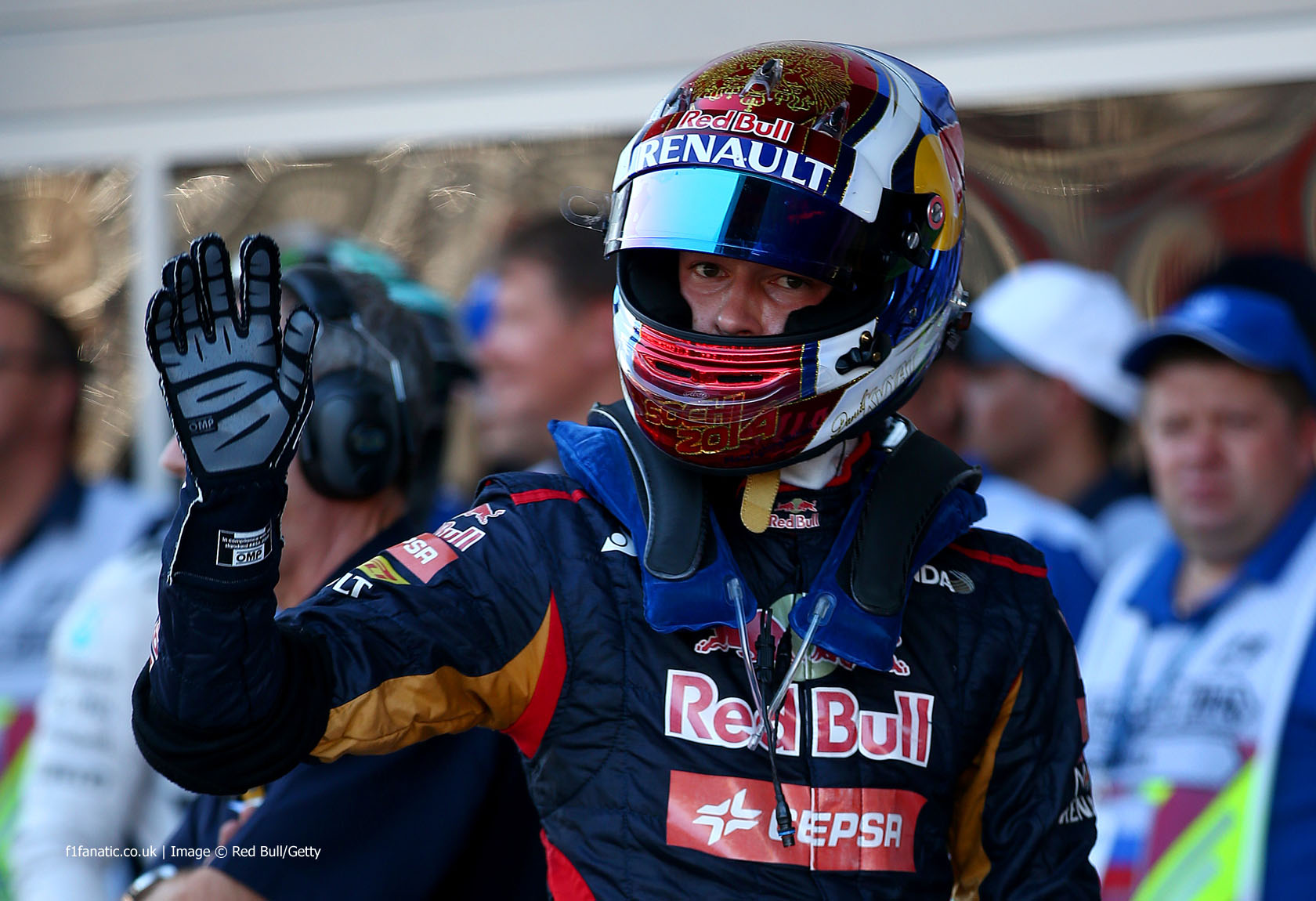 Somewhat overlooked amid the surprising news two weeks ago of Sebastian Vettel’s impending departure from Red Bull was the astonishing rise of the man who will replace him.

Twelve months ago Daniil Kvyat didn’t even have an F1 seat. But last weekend he arrived at his home grand prix not only as a grand prix driver – but one with a Red Bull contract in his pocket for 2015.

How did the Russian driver rise to the top so quickly from a country with little motor racing tradition? Red Bull’s young driver development programme explains much of it, but his ascent through their ranks was not straightforward either.

Vettel had just delivered Red Bull’s first race victory in April 2009 when Kvyat burst upon the European karting scene in the KF3 category. He finished third at his first attempt and took second in the WSK International series. He also brushed up on his Italian, one of the four languages spoken by the native of the republic of Bashkortostan:

The results caught the attention of former CART team boss Antonio Ferrari, who picked up the promising young Russian for a 2010 Formula BMW campaign in both the Pacific and European divisions of the sport.

As a guest driver in the Pacific category, Kvyat was not eligible for points towards the driver’s championship but impressed with five podium finishes from just eight races and established himself as the cream of the crop when it came to upcoming Russian talent. It was also enough for the Koiranen team – whose previous drivers include ran Valtteri Bottas – to be convinced to enter Kvyat in the final race of the Formula Renault 2.0 Eurocup championship. Although that outing was unsuccessful, they entered him in the UK winter series, where he placed fourth with podiums at Snetterton and Pembrey. Ultimately, the move to Koiranen was to prove highly beneficial to Kvyat’s future career.

Sainz also bested Kvyat in the Formula Renault 2.0 Eurocup series, but neither could beat Robin Frijns who outscored third-placed Kvyat by 90 points.

A third year of Formula Renault 2.0 racing with Koiranen brought mixed results. A fierce battle with Norman Nato in the Alps category included emphatic victories in both races of the first meeting at Monza:

In the prestigious Eurocup category Kvyat fought a season-long duel with Stoffel Vandoorne. Kvyat had quickly established himself as a rival to be feared, with a particularly eye-catching performance in tricky conditions at Motorland Aragon:

After taking Vandoorne’s championship lead with impressive back-to-back wins on home turf at the new Moscow Raceway, Kvyat went into the final race of the year at the Circuit de Catalunya 14 points behind his rival. Few could have expected the twists and turns which lay in store for the pair in the final race.

A rain-hit qualifying session saw Kvyat take pole position with Vandoorne 16th of the 37 cars. When Vandoorne retired early on with broken suspension, Kvyat looked on course to dramatically snatch the title from his helpless rival.

Even when Kvyat was handed a drive-through penalty for changing to wet weather tyres after the five-minute warning was given, fortune was on his side. He was far enough ahead only to fall to third place, and thanks to the Safety Car was able to regain some lost ground.

But wet weather tyres on a drying track finally proved Kvyat’s undoing. He slipped to eighth at the flag and Vandoorne held on to the title:

Nevertheless, a competitive year had snared Kvyat a berth at Christian Horner’s MW Arden team in GP3 for 2013. The season began slowly – he didn’t score in the opening weekend in Spain and was point-less in Germany too. Kvyat finally started to get into his stride at Spa, where he won:

He also appeared as a guest driver in European F3 with Carlin, where he scored one win and five podium finishes despite not being eligible for championship points. When Mark Webber announced his retirement from Formula One it set in motion the chain of events which led to Kvyat becoming only the second Russian grand prix driver, following in the Vitaly Petrov’s footsteps.

However Red Bull’s choice of Kvyat to replace Daniel Ricciardo, who graduated from Toro Rosso to Red Bull, came as a surprise to many. Antonio Felix da Costa had been widely regarded as Red Bull’s next driver in line for an F1 seat.

But Kvyat quickly provided justification for Toro Rosso’s decision. He clinched the GP3 title in Abu Dhabi with his second perfect performance of the year, scored every point available for pole position, fastest lap, leading a lap and winning the race: His reward for a superb season was to take the wheel of Toro Rosso’s F1 challenger in free practice for the United States Grand Prix, gaining experience ahead of his debut at this year’s Australian Grand Prix, where he became F1’s youngest ever points scorer.