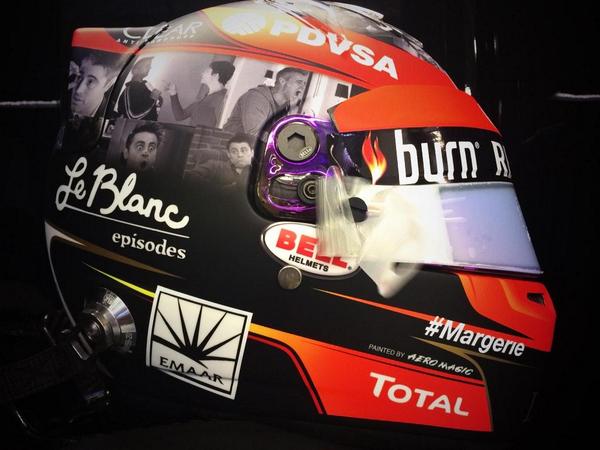 Here’s the Twitter story of Friday at the United States Grand Prix.

happy halloween to everyone from me and my engineer tony! #halloween #USGP #cantwait #StarWars pic.twitter.com/FY9pZub4q5

Special lid for @RGrosjean this weekend, who is a fan of Matt LeBlanc?! #USGP pic.twitter.com/52X8V9zo9T

Test drivers Verstappen and Nasr leave the pits on intermediate tyres due to the slight damp patches on the track. #F1 #UnitedStatesGP

In case you missed it, Raikkonen was running with an unusual sensor on his @InsideFerrari earlier in #FP1 #USGP #F1 pic.twitter.com/3E7O7eZ03n

Fernando Alonso of @InsideFerrari puts too much power down exiting the final corner #USGP #F1 pic.twitter.com/YYMtPCxy7o

Grosjean suspected a car problem after running wide at turn 19.

Grosjean: "There is a problem. There is something broken on the rear-right". #F1 #UnitedStatesGP

The wind picked up in the afternoon.

#F1 #AUSTIN I’m told by UBIMET’S @swandau that it’s blowing a Force 5-6 NE’rly at the circuit now: “windiest it’s been all season”, he says

Massa pointing the wrong way at turn one after a spin. #F1 #USGP pic.twitter.com/JkQvslzgrp

Button says he has too much front end in low speed corners. Earlier he complained about his radio which also didn’t work in FP1. #F1 #USGP

FOM’s combination of two camera images made for an interesting addition to the coverage.

Just like in the morning, Grosjean was suspicious of his Lotus, while team mate Pastor Maldonado had his second spin of he day.

Grosjean spins off and asks “are you sure things are working properly?” He’s told they’re checking… #F1 #USGP

The stars and stripes are back in the turn 16 run-off. #F1 #USGP pic.twitter.com/YVrCsNo2Mv

Problem for Hamilton, he’s told: “Box this lap, we’ve got an issue with the car, just keep the revs up.” #F1 #USGP

Following Jules Bianchi’s incident in the Japanese Grand Prix, changes to safety car proceedings were tested after both sessions.

Chequered flag and Virtual Safety Car laps bring our track afternoon to an end, but this is not the end of our activities today… #USGP

Sebastian Vettel will start Sunday’s race from the pit lane, but still intends to take part in qualifying.

Horner tells Sky re VET and qual that ‘It’s important he takes part in the event and registers the 107%. We need to abide by the rules.’

A special design on Adrian Sutil’s helmet, which his girlfriend tried on.

Pretty cool and special this "fighter pilot" #F1 helmet design! Don't you agree? I like it a lot #USGP #AS99 pic.twitter.com/IBjwCSLTo9

Massa: It was very windy in the afternoon which made it difficult to judge car balance & the car was feeling different from the morning

It's #Halloween today, so @EstebanGtz brought some treats for the amazing fans here at #COTA @circuitamericas #USGP pic.twitter.com/OojYlzymC6

The whole team principals debate on costs – just shows difficulty of having teams part of making the rules.

@McLarenF1 @eboullier @FIA It's a bigger shame that two teams are going to the wall, hundreds may lose their jobs, and it was all avoidable.