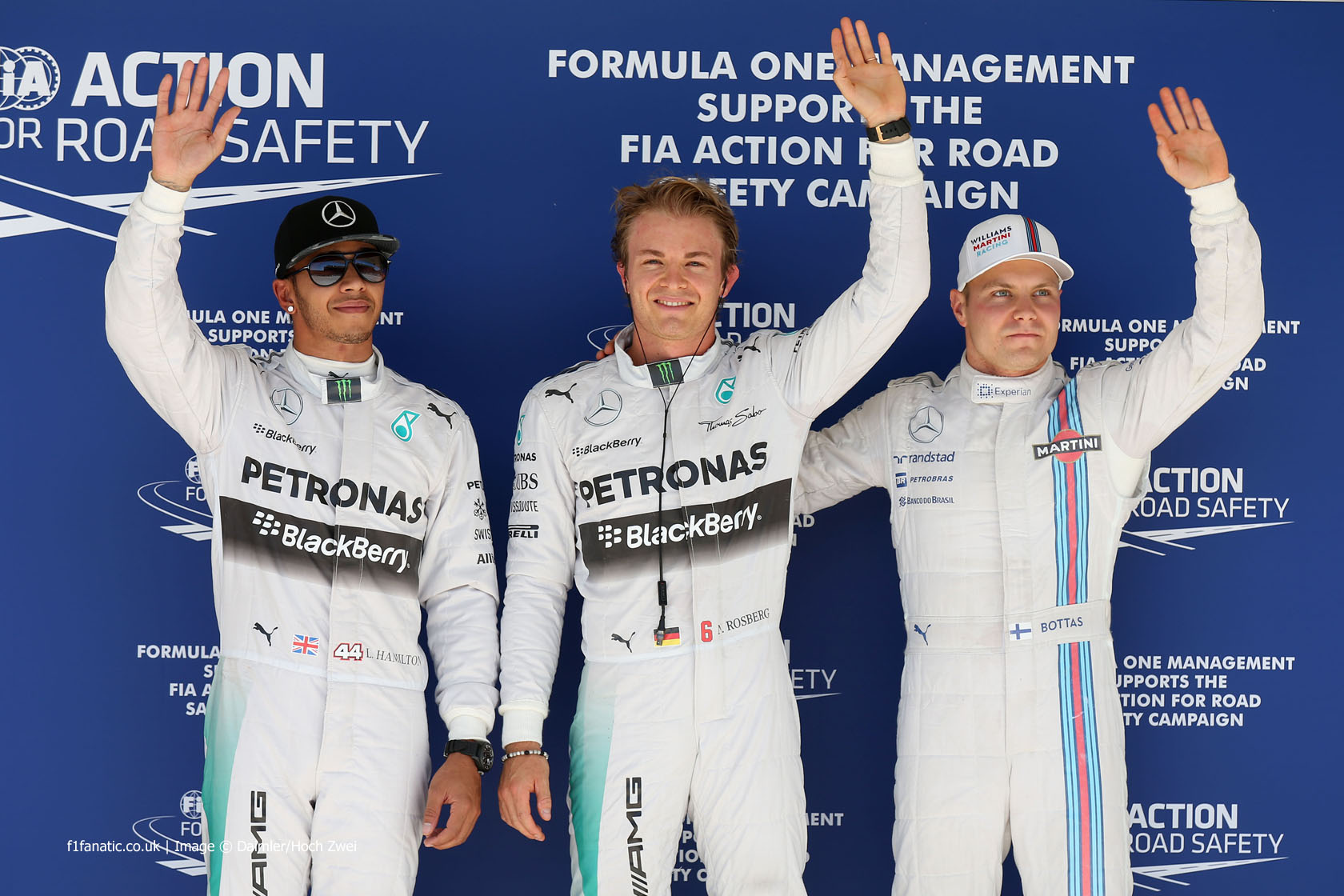 Lewis Hamilton held sway in practice but when the crunch came in qualifying Nico Rosberg beat his team mate to claim pole position at the Circuit of the Americas.

With Marussia and Caterham absent from this weekend’s race, Q1 and Q2 were altered so that just four cars were eliminated in each stage, leaving the usual top ten shoot-out in Q3.

Hamilton set the pace in the first part of qualifying but appeared to have compromised his effort when a lock-up on his medium tyres led him to switch to the softer compound. However his team mate also used a pair of softs to ensure he gained a place in Q2.

The pair were separated by the two Williams drivers at the end of Q1, while drivers from four different teams failed to make the cut.

Among them was Sebastian Vettel, who came within four-tenths of a second of making it into Q2 with his single run. His qualifying position was irrelevant anyway, as his power unit change means he will start from the pits.

Only Romain Grosjean failed to beat his time, the Lotus driver running wide in turn 12. Jean-Eric Vergne failed to make the cut by just five-hundredths of a second, while Esteban Gutierrez was almost seven tenths of a second slower than his team mate.

Hamilton continued to struggle with his braking problem in Q2. He locked up another set of tyres and this threatened to be a more serious problem, as he would start the race on his set from Q2. It also meant Rosberg beat him to the fastest time.

Despite having done that, Rosberg took another run at the end of the session and put in a blistering lap which left him almost a full second ahead of Hamilton – a clear statement of intent ahead of the top ten shoot-out.

An inspired Adrian Sutil got his Sauber up to ninth with his last run, and although Kimi Raikkonen bumped him down to tenth Sutil hung on to claim his and his team’s first appearance in Q1 this year.

It came at the expense of Pastor Maldonado, who made an error on his last run, the closely-matched Force Indias and Daniil Kvyat. However the latter will be relegated to last place due to his ten-place penalty.

Rosberg was only able to trim eight thousandths of a second off his Q2 time with his first run in Q3. It was enough to keep him ahead of Hamilton, however, who was fractionally slower in each of the three sectors.

Over their final runs Rosberg sustained his momentum, continuing to edge further clear of his team mate. Only in the final sector did the pendulum swing Hamilton’s way, but by then it was far too late – Rosberg took pole position by over three-tenths of a second.

The Williams pair held onto the second row of the grid but the two McLaren drivers, who had occupied the third row after their initial runs, slipped back. Jenson Button suspected the changing track conditions produced increased understeer in car, and although he beat Magnussen to seventh he will take a five-place penalty.

Daniel Ricciardo took advantage of their struggles, moving up to fifth ahead of Alonso.