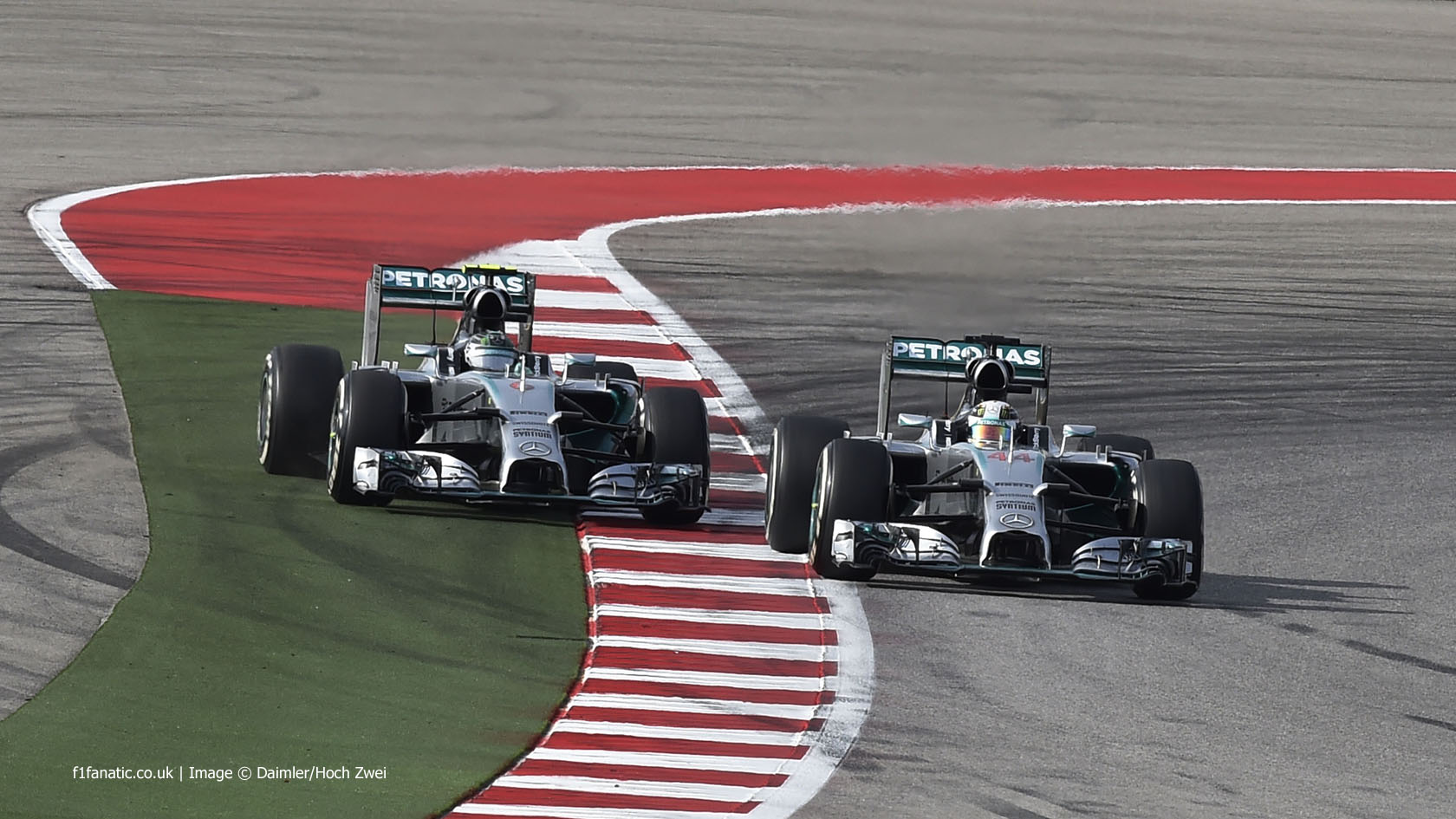 After winning his fifth consecutive race Lewis Hamilton was voted Driver of the Weekend for the fourth grand prix in a row.

It was his narrowest win of the four, however, with Daniel Ricciardo a close second following his drive to finish on the podium.

Pastor Maldonado came third in the voting after finally getting some points on the board.

Hamilton may have been beaten to pole position by Nico Rosberg for the ninth time this year, but his dogged pursuit of his team mate in the race ultimately won him the day.

Utterly dominant in free practice, and his disappointing qualifying effort can be marked down to the problems with his front left brake (although he may not have been on pole in any event, he certainly would have been closer to Rosberg without that issue).

As for the race itself, a sublime effort. He struggled with the car in the first stint, but kept at it and made a brave and opportunistic move on Rosberg in the second stint to take the lead and ultimately the win.

I’m now prepared to call it. If Hamilton doesn’t suffer from reliability issues in the next two races, he will be world champion.
Tyler (@Tdog)

I think Hamilton deserved it clearly.

First place from the beginning of the weekend till the end, except qualifying and he didn’t make any mistake to lose pole. It was just a perfect time for Rosberg at that time – which happened only once this weekend. In the race he showed his class again, overtook his rival clearly on track and always had the answer on his pace.
BoRa (@Bnwllc3)

Ricciardo may have fluffed the start, but he was very impressive clawing back the places in a car handicapped by its lack of engine power. Once again he demonstrated superb race craft.

Hamilton looked like he’d have to settle for second after Saturday. Rosberg had a huge advantage in lap time, having dialled in the set-up perfectly. But everything changed on Sunday, Hamilton stalked Rosberg until the pit stops, had his aero tweaked, then proceeded to catch his team mate, pass him cleanly, and open up a large enough gap to take DRS out of the equation. It was a clinical and methodical demonstration of superiority.

Both are deserving, but I voted for Hamilton.
Tgu (@Thegrapeunwashed)

Ricciardo knew he needed a good start to attack the Williams drivers – but he didn’t get one.

Nonetheless he best both to the flag, passing Fernando Alonso on the way and jumping one Williams at each of his two pit stops.

Ricciardo for me, he may have messed up the start but other than that he had a good weekend and drove well all race. Many drivers can’t handle the pressure of racing wheel to wheel with Alonso but Daniel kept his cool and came out on top. I would have preferred to see him overtake the Williams drivers on the track but you can’t fault the teams strategy of getting him past during the pit stops and getting another podium in what looked like the third best car is a great result.

Hamilton drove a textbook race, but was beaten in qualifying.

Vettel did well to overcome the penalty, but I can’t help think he should have passed Alonso.

Daniel Ricciardo fluffed his start but what a comeback and no cars he had a chance of beating finished ahead of him. Maximum result so the winner for me.
Philip (@Philipgb)

Despite picking up two penalties during the course of the race Maldonado scored his first points of the season. He pipped Sebastian Vettel to third place in the poll by a single vote.

Man, this is a tough one. I think for me it’s between six drivers. Maldonado, Ricciardo, Alonso, Vettel, Vergne and Hamilton. I think Vergne drops out first. Not a great qualifying at all, but made it up to ninth.

Next to drop out is Hamilton, again because of qualifying, but less so. I know it wasn’t fully down to him, but at the same time it was still a bit of a shame. But I think he’s definitely one of the top 3 drivers of the race for me.

After that, next to drop out is Vettel. I think he had a very good last couple of stints, but his first long stint was pretty awful. Hard to go higher due to lack of participation in qualifying (for the most part).

Next to drop out is Ricciardo. He had a decent race, and a decent qualifying. I think he maximised his race result, but his qualifying could have been a little better. That leaves Alonso and, that’s right, Maldonado.

Alonso for me has to drop out next. Once again I think he’s maximized the car and you can’t really ask for more than that. Good scraps in the race and ended where he started, in his maximum possible position of sixth given the circumstances.

Maldonado therefore gets my vote. His qualifying was good, maybe the maximum available and destroyed Grosjean. And then in the race, he was very good, and essentially made the car look better than it was. Obviously you can’t drive a car beyond its limits, but he made it look it. Great performance.
@PhilEReid