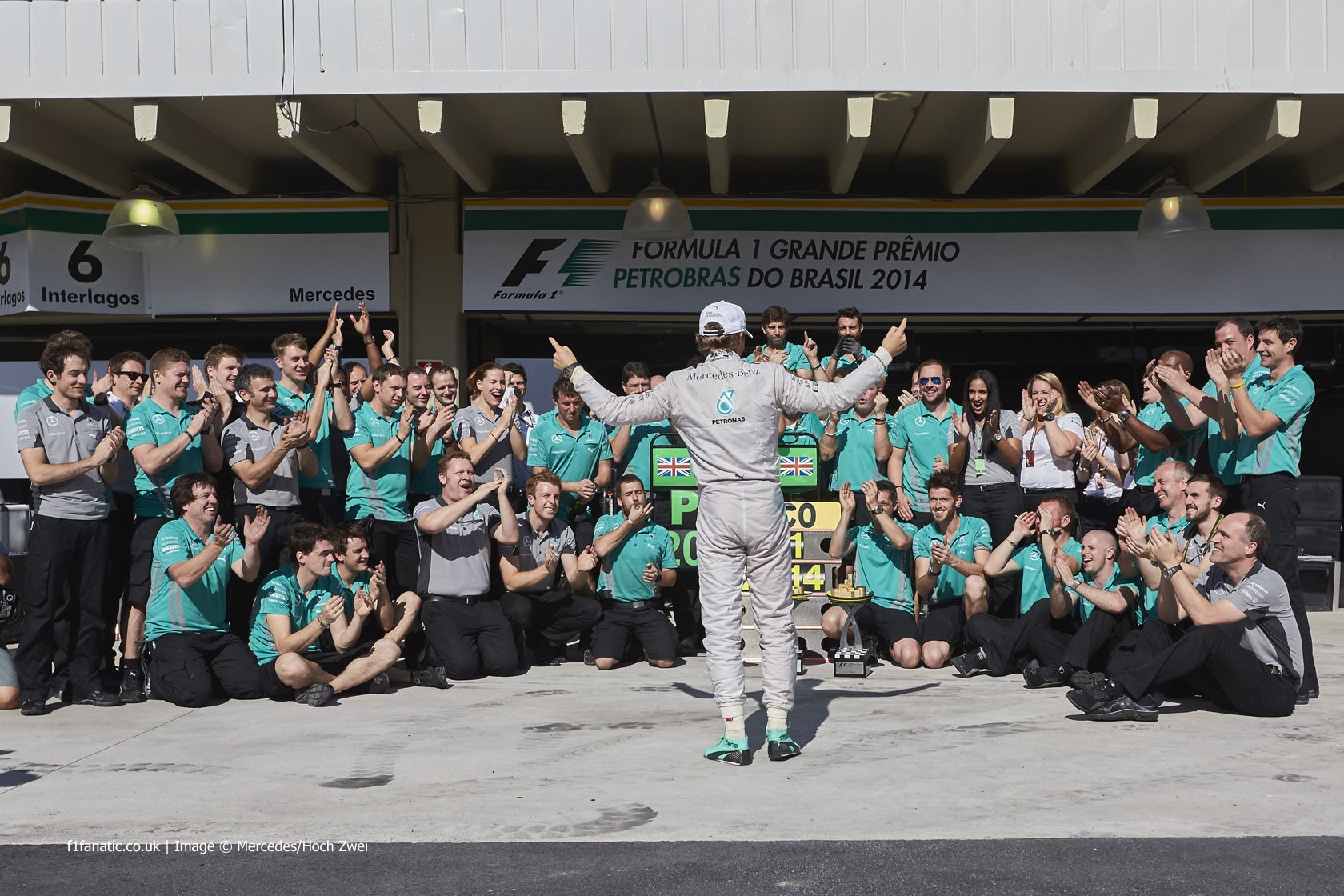 Nico Rosberg claimed his fifth victory of the season at Interlagos in emphatic fashion, leading all three practice sessions and each part of qualifying before clinching the win.

This was Rosberg’s eighth career victory, putting him level with the likes of Jacky Ickx and 1967 world champion Denny Hulme.

He now has five wins this year, half as many as team mate Lewis Hamilton. However Rosberg remains in contention for the championship – and not just because of the controversial double points system introduced this year.

With a 17-point deficit to his team mate, Rosberg would be able to win the championship in Abu Dhabi even under last year’s points system. But with twice as many points available for the top ten places at the final round, Rosberg’s chances of winning the title are higher than they would be.

How double points can change the title outcome

These tables shows how far Hamilton would be ahead of Rosberg in the points based on their possible finishing positions using both scoring systems in Abu Dhabi. The scenarios in which Rosberg would win the championship highlighted in green.

Under the normal points system Rosberg would have to win the race with Hamilton finishing no higher than seventh, or finish second with Hamilton not scoring, to take the title.

However under double points Rosberg can take the title if he wins and Hamilton finishes third. That happened when Rosberg took his last win before Sunday’s race, in Germany.

Whereas under the normal points system there would only be six ways Rosberg can take the title, under double points there are 25 different combinations.

Of course if the race is stopped short of 75% distance and half points are awarded, the ‘normal’ points system will apply.

Use the Points Calculator to see how double points could affect the entire championship: In a season where lap times have typically been two to three seconds slower than last year, it was a surprise to see the cars approaching record pace at Interlagos. Rosberg’s pole position time was 0.201 seconds slower than the Interlagos track record, set by Rubens Barrichello on a minimum-fuel qualifying run in 2004.

Why were the cars so much quicker this year? A new, smoother track surface undoubtedly helped, as did the softer tyres which Pirelli brought at the drivers’ urging. But the new V6 turbo engines also lost less power at the higher altitude than their normally aspirated V8 predecessors – something which will also make a difference when F1 returns to the thin air of Mexico City next year.

The chart below compares the fastest lap time seen at each Brazilian Grand Prix weekend since the last significant alteration to the circuit in 2000.

Rosberg’s pole position was his tenth of the season, making him the first winner of the FIA’s Pole Position Trophy. His career total is now 14, equalling that of James Hunt, Alberto Ascari, Ronnie Peterson and Rubens Barrichello.

Mercedes had their 11th front row lock-out this year, and their seventh consecutively.

Rosberg has once again led more laps this year than Hamilton – 482 to 455. Nico Hulkenberg led a race for the first time this year, becoming the tenth driver to do so, but Mercedes have led 86.8% of all racing laps so far.

In the race they achieved their 11th one-two, beating the record set by McLaren in 1988, albeit in a season which was three races shorter than this one. They also took their 30th podium finish, one more than the record set by Ferrari in 2004.

Daniel Ricciardo’s retirement brought his 15-race run of consecutive points scores to an end. However he is guaranteed third in the drivers’ championship and Red Bull are now un-catchable in second place in the constructors’ points.

Spotted any other interesting stats and facts from the Brazilian Grand Prix? Share them in the comments.