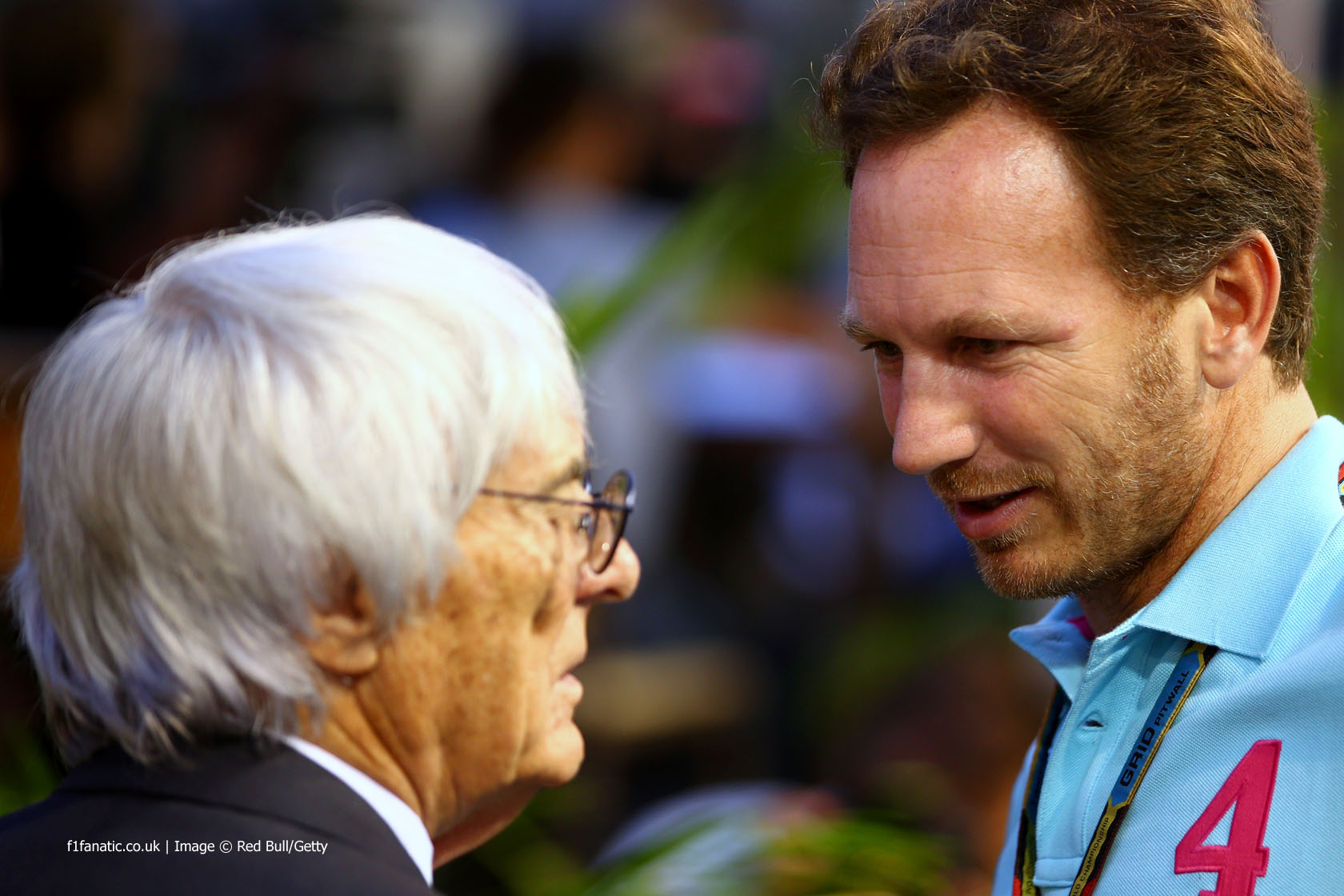 In the round-up: F1’s smaller teams allege the arrangement between Bernie Ecclestone and the richest teams who receive the most money could be considered an unlawful cartel.

“Three of Formula One’s smaller teams have accused Bernie Ecclestone of presiding over a ‘cartel’ that benefits their rivals, ‘massively undermining its reputation as a sport’.”

“It spoke of a ‘questionable cartel’ of the rights holder, Red Bull, Ferrari, Mercedes, McLaren and Williams who controlled ‘both the governance of Formula One and, apparently, the distribution of…funds.'” Stevens to race for Caterham (Crash)

“Will Stevens will make his race debut for Caterham when the team returns at next weekend’s Abu Dhabi Grand Prix.”

Stevens joined Caterham’s Racing Academy in June last year. However after the team’s change of ownership 12 months later he subsequently appeared with their logos obscured on his overalls (see picture) and was announced as Marussia’s official reserve driver last month.

“GP3 champion-elect Alex Lynn remains in the frame for a Toro Rosso race seat in 2015, despite strong competition from Jean-Eric Vergne, Carlos Sainz Jnr and outside bet Pierre Gasly.”

Michelin say they would not return to F1 if they were required to make tyres which have to be changed ‘every seven laps’.

“Gary began working with McLaren in 2006, and has spent the past eight years as a combination of test driver and reserve driver.”

“One of the biggest issues that emerged in the tests was drivers finding it hard to concentrate on keeping below a specific delta time.”

Toto Wolff: “The duel was so intense so we thought it was a good idea to talk after Abu Dhabi. Now we have agreed that we get together on Monday in Abu Dhabi to talk.”

“He said of Mr Fernandes, who founded Caterham and is chairman of Queens Park Rangers Football Club: ‘He’s simply walked away from the employees.'”

What is a cartel and why does it matter? (Joe Saward)

“The European Commission does not need a complaint to get involved. If the bureaucrats think that there might be a cartel in operation they can take action on the basis that Article 102 of the Treaty on the Functioning of the European Union prohibits abusive conduct by companies that have a dominant position in a particular market.”

A few interesting new radio messages from the Brazilian Grand Prix including Massa being told to move forwards after incorrectly pulling into the McLaren pit, Raikkonen saying the McLarens were too quick for him in a straight line, and Vettel being advised that Alonso had caught Raikkonen behind him but that Raikkonen was unlikely to hold him up – which of course turned out not to be the case.

Just finished packing for the last #GP of 2014. Everyday I have a thought for #Jules and flying to a GP makes it stronger. #ForzaJules

A novel idea on how F1’s points system could be radically overhauled:

One thing I have thought of before is dividing the season into multiple ‘Cups’.

You’ll have the drivers fighting regularly, as they try and win each cup. You’ll have moments throughout the season where drivers have won something more than a race. Each little part of the season is compartmentalised and easier to remember.
@DavidS

It’s unusual to see a driver who has just won his first world championship immediately switch teams but that’s exactly what happened five years ago today – Jenson Button left Brawn (who were turning into Mercedes) to join McLaren: