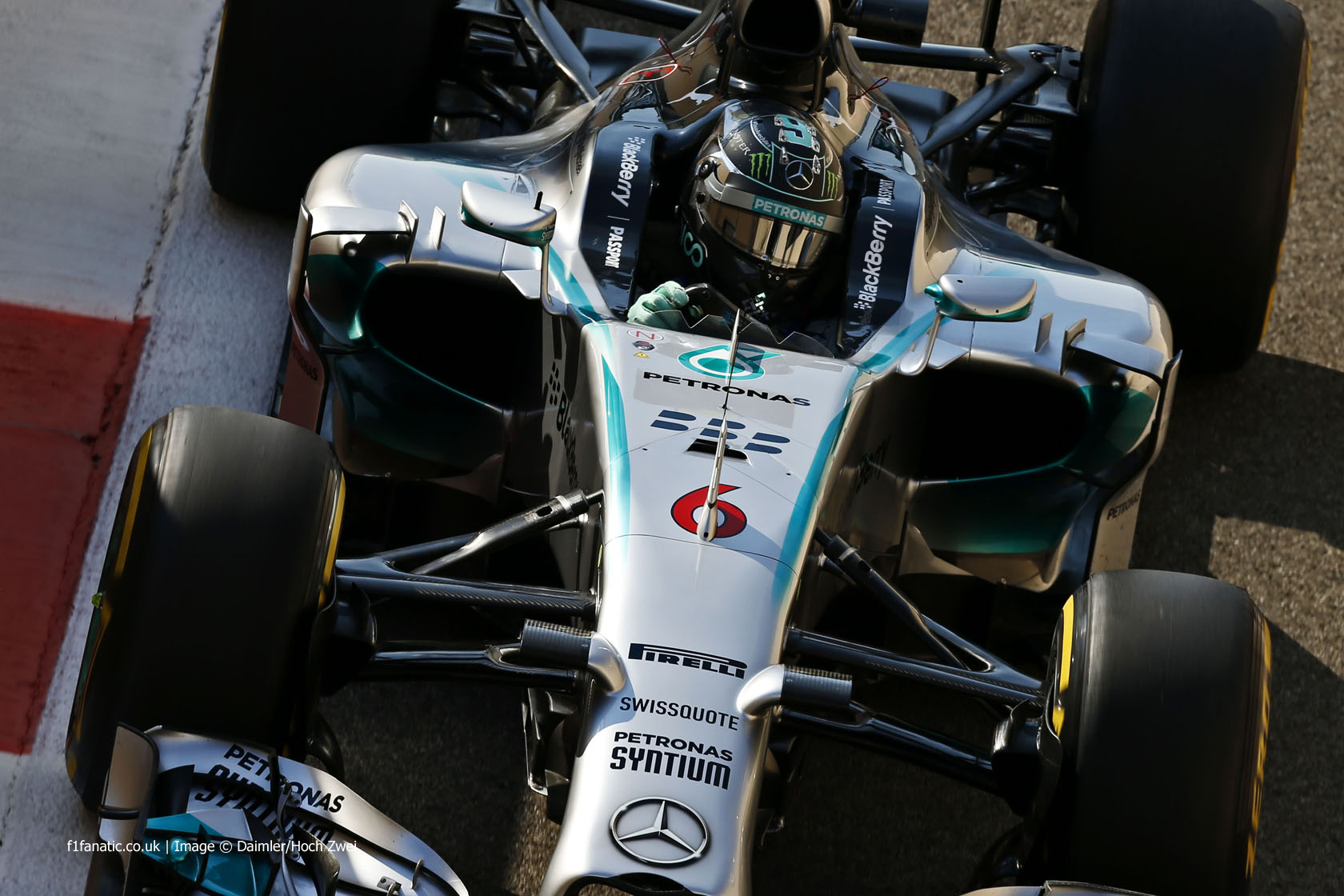 Hamilton set the pace in the first two parts of qualifying but small mistakes on both his runs in Q3 presented Rosberg with an opportunity which he did not waste – and strengthens his chance of taking the title.

Hamilton headed Rosberg by a tenth of a second in an uneventful first part of qualifying. The Mercedes pair, like several of their rivals, opted to use the super-soft tyres which they do not expect to need in tomorrow’s race.

Both Ferrari drivers were still in the drop zone with four minutes to go, but made it through into Q2 after late improvements. Fernando Alonso said he was held up by Daniil Kvyat at the pit lane exit – the Toro Rosso driver reported he hadn’t seen the Ferrari coming.

The Caterham duo were eliminated in Q1 as usual on their return to F1. Newcomer Will Stevens was last, half a second down on team mate Kamui Kobayashi, but believed he could have gone much quicker on his last run.

“I was nearly a second up going into turn 17 but I lost the rear and lost all the time I’d gained,” he explained on the radio. “The rear is a limitation.”

The first sign that the championship contenders might be feeling the pressure of the title fight came in Q2. Rosberg braked a fraction too late for turn eight, spoiling his first run. Meanwhile Hamilton became the first driver of the weekend to dip under the 1’41 mark.

Rosberg’s second run left him half a second off his team mate. At the end of the session the two Williams posted improved times which split the two Mercedes.

McLaren’s progress was less straightforward – both drivers returned to the pits without setting times on their first runs. Jenson Button was unimpressed when told he needed to top up with fuel, asking “are you serious?”

Button took sixth when he finally set his first time, which bumped the other McLaren of Kevin Magnussen down to ninth place. Kimi Raikkonen edged Magnussen by three-hundredths of a second, and when Daniil Kvyat grabbed a place in Q3 it left Magnussen’s session at an end.

Jean-Eric Vergne and Sergio Perez also missed the cut by less than a tenth of a second.

It was Hamilton’s turn to slip up when Q3 began. Rosberg was the first to set a time, lowering the best to a 1’40.697. Hamilton reported a tyre vibration after joining the circuit, but in the final sector he was on course to get close to Rosberg’s time until he ran wide in between the two final corners.

That left Hamilton second behind Rosberg ahead of their final runs, with the Williams pair and Daniel Ricciardo within a few tenths of a second.

A slight lock-up on his final lap didn’t prevent Hamilton from improving his time. But his final effort was still over a tenth of a second of Rosberg’s first lap – and his team mate then lowered the bar even further for good measure.

A 1’40.480 secured pole position for Rosberg by almost four-tenths of a second, but even so he felt concerned Hamilton might take it from him at the end. When race engineer Tony Roos coolly informed him of his 11th pole position of the season, a wound-up Rosberg told him “you’ve got to stop with that Tony, seriously! Be more enthusiastic, please!”

Hamilton’s slip-up opened the door for Williams, but neither driver was able to take advantage, denying Rosberg a vital advantage ahead of tomorrow’s title-deciding race. The pair occupy the second row of the grid, followed by the two Red Bulls.

71 comments on “Rosberg keeps Hamilton from pole for title decider”