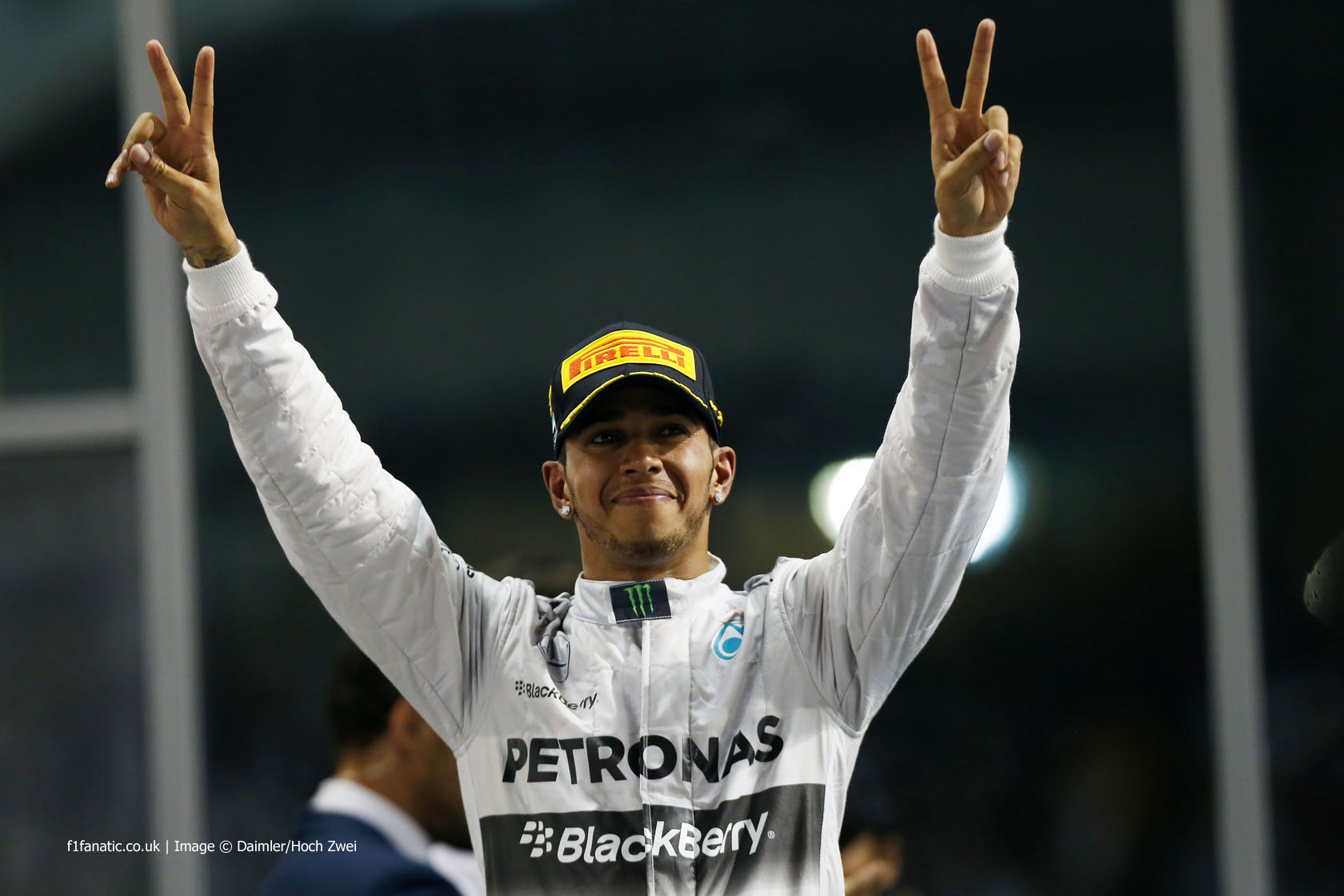 Perhaps in an ideal world every F1 season would end with a driver claiming the would championship by winning the last race of the season. But it doesn’t happen that often.

But yesterday Lewis Hamilton did just that, and sealed his second drivers’ championship with victory in the season finale. It was the 11th time this has happened in F1’s 65 seasons.

The first two championships were decided this way, but it didn’t happen again for over a decade. Curiously the unique father-and-son title winners Graham Hill and Damon Hill won all three of their titles with victories in the final races of the season.

Hamilton’s triumph yesterday ensured their feat remains unmatched, by stopping Nico Rosberg from emulating father Keke’s 1982 title win. Here are the eleven occasions when a victory in the final race decided the championship:

Along with Hamilton, only three drivers won races this year – Rosberg took five and Daniel Ricciardo three. That meant 2014 equalled the record for the lowest number of different race winners during a season: However Rosberg once again frustrated Hamilton’s efforts to take pole position and took the 15th of his career, 11 of which have come this year. Rosberg out-qualified Hamilton 11-7 over the season. That’s something none of Hamilton’s team mates have managed since his first year alongside Alonso in 2007, which was when drivers qualified with the starting fuel loads.

Both drivers continued to pile up success for Mercedes. The team took its 16th win of the season, beating the record of 15 set by McLaren in 1988 and Ferrari in 2002 and 2004, although those were all in shorter seasons. They also equalled Red Bull’s record of taking 18 pole positions in a 19-race season, which they achieved in 2011.

Mercedes engines completed a clean sweep of pole positions in 2014, something which last happened in 1969 when every pole sitter had a Cosworth engine.

The stranglehold on success Mercedes had this year meant no wins for both Ferrari and McLaren – the last F1 season where none of the race were won by either of those teams was in 1980. Vettel also completed his first full season without a win or a pole position.

Hamilton’s win yesterday brings Vettel’s reign as champion to an end (informally) four years after it started at the same circuit. Vettel had been champion for 1,470 consecutive days, the third-longest reign in F1 history:

*Title decided on Friday practice when an injury forced Nigel Mansell to withdraw from the race weekend.

Although his 11 wins included victory in F1’s first ever double points finale, Hamilton’s haul of 384 points fell short of the record of 397 set by Vettel last year.

Happily the fears double points would swing the outcome of the drivers’ championship title were not realised, though it did affect some of the other placings. Sergio Perez was the biggest winner, finishing two places higher than he would have if conventional points had been used.

Perez’s gain was Kimi Raikkonen and Kevin Magnussen’s loss. Ironically, Perez was one of few drivers who spoke up in favour of double points when the rule was announced. With double points on offer, Force India chose a good time to record their best result since the Bahrain Grand Prix. It wasn’t enough to wrest fifth in the constructors’ championship, but without Jenson Button in fifth place they would have been close.

Given the doubt over Button’s future at McLaren some significance has already been attached to this result. However it is not the case that, had Button not taken fifth yesterday, McLaren would have lost fifth in the championship to Force India.

Had Button broken down on the last lap and everyone moved up a place, fifth and sixth for the Force Indias and tenth for Kevin Magnussen would have seen the two teams end the year on 163 points, and McLaren would have stayed ahead thanks to Magnussen’s second place in Australia.

Third place for Valtteri Bottas meant he jumped up from sixth to fourth in the championship at the last race. Williams were big winners from double points, taking a haul of 66 from the final race, one less than they managed in the previous four races combined.

Williams also had two drivers on the podium for the first time since Nick Heidfeld and Mark Webber finished second and third at the 2005 Monaco Grand Prix.

Hamilton backed off at the end which allowed Daniel Ricciardo to claim the first fastest lap of his career, becoming the 127th driver to do so.

For the first time since Sauber entered F1 in 1993, it failed to score a point during the entire season. Both Adrian Sutil and Esteban Gutierrez have lost their drives. They ended the season tied in terms of qualifying results (9-9) and race finishes (5-5).

The McLaren drivers completed the most racing laps of anyone this year. Button covered 1,120 – 14 laps shy of the full season distance – and Magnussen managed 1,111. At the opposite end of the scale was Andre Lotterer, who managed a single lap at Spa for Caterham.

Finally, for the third time in his four-year F1 career, Pastor Maldonado ended the season with the most penalties of any driver (including those given for component changes.)

Spotted any other interesting stats and facts from the Abu Dhabi Grand Prix? Share them in the comments.