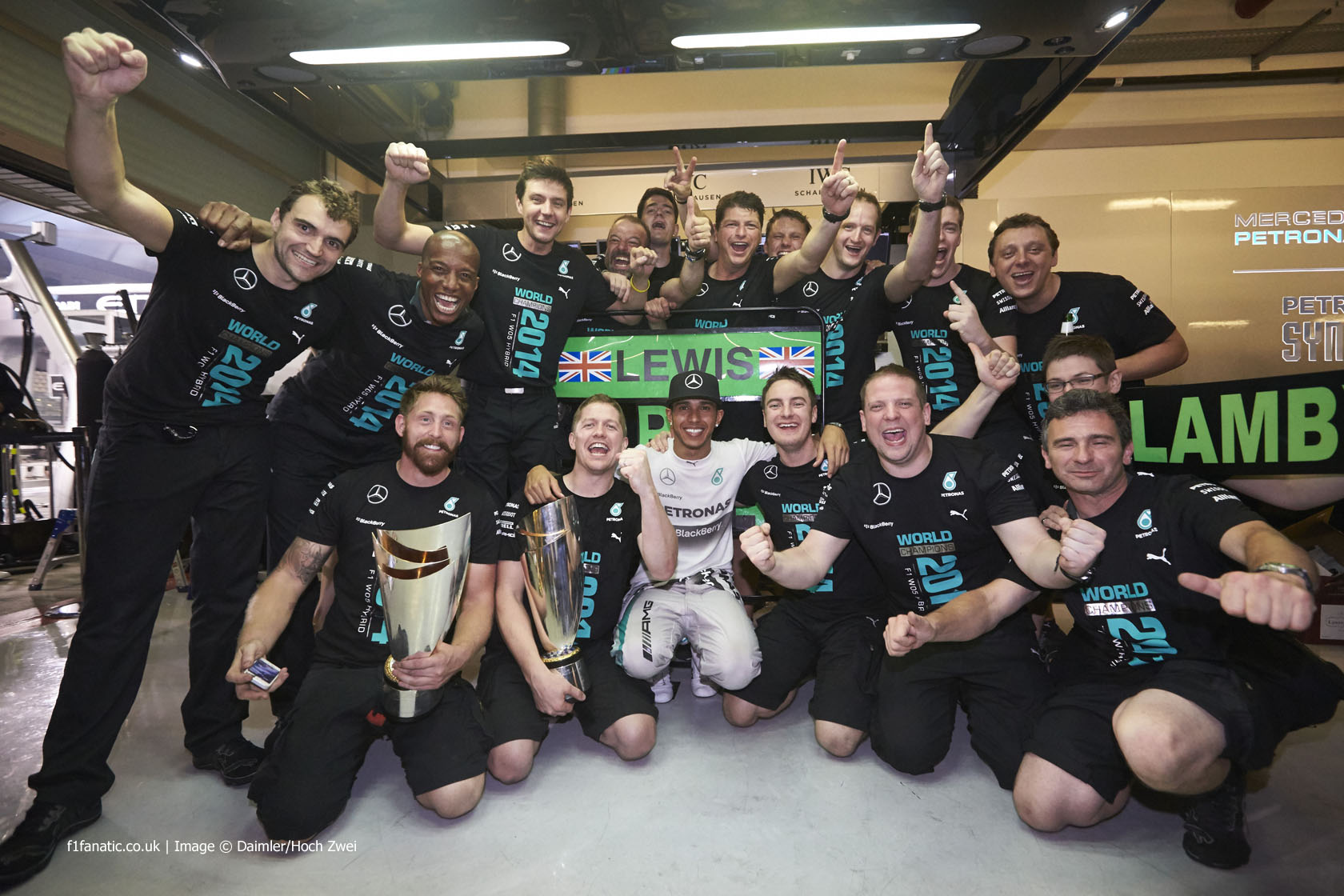 In the round-up: Lewis Hamilton is tipped to sign an extended five-year contract with Mercedes following his championship triumph.

Hamilton to become GB’s richest ever sports star (The Telegraph)

“Hamilton’s latest championship triumph is poised to net him a new £100 million, five-year contract with Mercedes, cementing his status as the UK’s most wealthy active athlete.”

Christian Horner: “We have taken things to the extreme in a particular area. They [the FIA] are focusing on one element of the front wing, which is the upper element, whereas others are taking advantage of other areas.”

“Schumacher’s manager, Sabine Kehm, tells German TV station RTL that the seven-time champion is ‘making progress considering the severity of his injury’ and ‘you have to give it time. I think you really just have to have patience’.”

Lewis Hamilton’s lack of popularity: is it cos he is black? (The Guardian)

“Ultimately, Lewis deserves recognition because his success goes far beyond sport itself. But if he never gains national acceptance through the sports personality vote, it will say more about Britain than about him.”

Finding the elusive right balance (The Way It Is)

“Are any of the ruling bureaucracies of the sport’s major categories – F1, IndyCars, WEC, TUSC, NASCAR, et. al. – likely to find the right solutions to a festering nest of technical and commercial problems?”

An interview I did for BBC Radio Wales yesterday on Hamilton, Rosberg, double points and F1’s cost crisis (five minutes after waking from a four-hour sleep, which is why I sound dead).

The BBC say they had a 5-minute peak of 6.5m viewers when @LewisHamilton won the championship yesterday. 4.7m average for the race. #F1

Past year. I'm not done yet!! There's still so much I want to achieve in this sport 👍 #JB22 #Bringtheaction

The one has taken his seat already, while the other one is still on hold… @JensonButton @alo_oficial #AbuDhabiGP pic.twitter.com/zjZqfoaqr3

Sitting at the airport going through media coverage of #F1. @MailOnline have had an absolute shocker with this. pic.twitter.com/739R9ZgeX8

Who cares about the world title when there's melon juice being drunk? That's the real story… @LewisHamilton #F1 pic.twitter.com/pSUvTiN9sD

How concerned should fans of Ferrari – and Sebastian Vettel – be about their second change of team principal in seven months?

It seems like the continuous manager sackings of the early 1990s are beginning to rule their scene again. So sad how that 2006 team came to this. Bit by bit, it crumbled.

Vettel indeed has a mountain to climb – Schumacher at least had Jean Todt appointed way earlier than when he came and the team was on an upward trend for three years by 1996. Vettel joins a train which is still accelerating down a steep slope.
@Atticus-2

Five years ago today Michael Schumacher’s F1 comeback had not yet been confirmed but his appearance at the SKUSA SuperNationals XIII kart race – where he beat the likes of Sebastien Buemi and Nelson Piquet Jnr – showed he was still keen to compete: