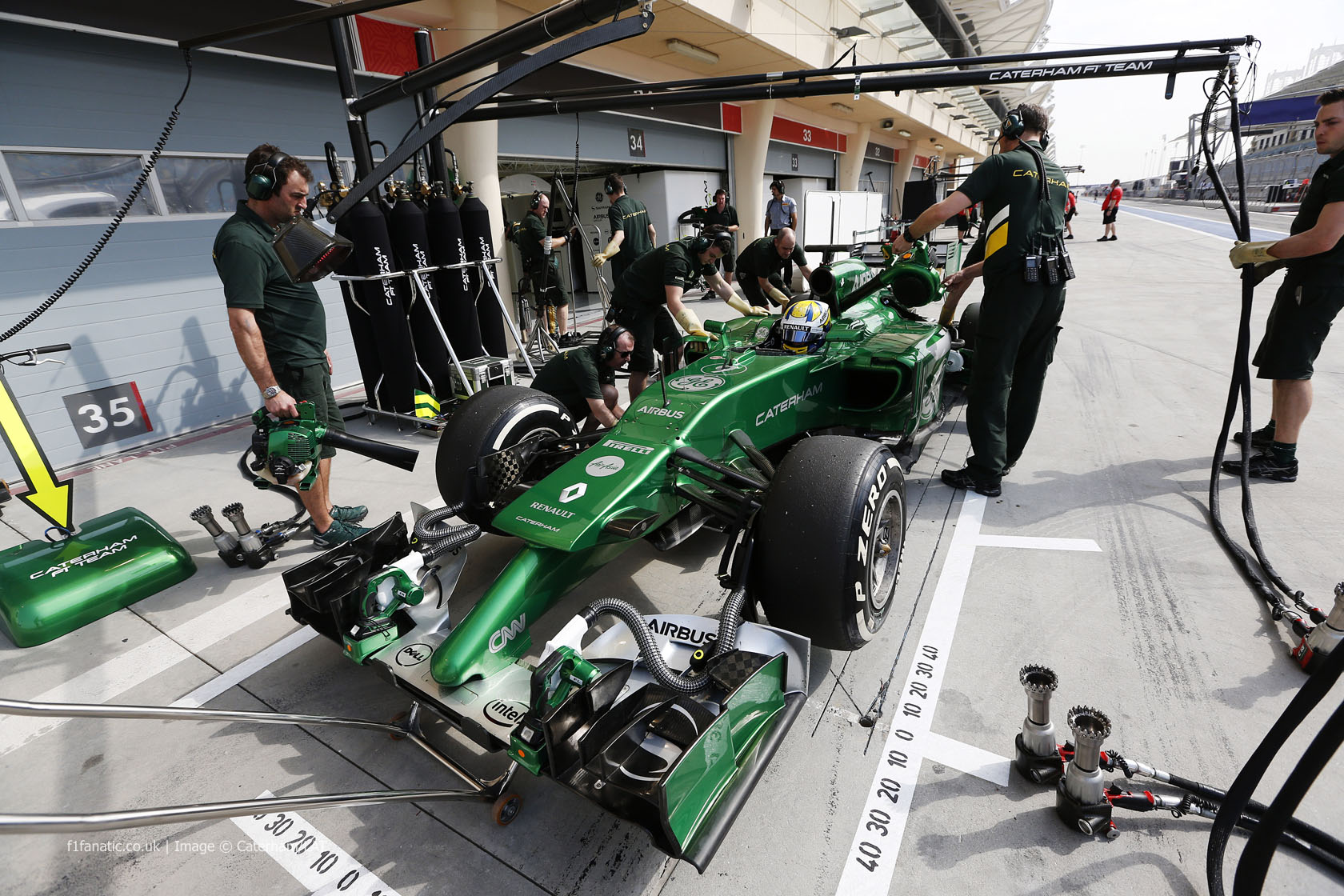 In the round-up: Caterham will be allowed to use their CT05 chassis again in the 2015 F1 season if they are able to find a buyer.

“Following Leafield-based Caterham’s appearance at the final race of the season in Abu Dhabi last month, [administrator Finbarr] O’Connell had stated a deal before Christmas was crucial if the team were to survive.”

“Having the experience previously with Ron, he will definitely have a much better handle on it and won’t be in a tricky situation like last time.”

“I’m quite sore this morning and am pretty bruised and have got a stinking headache. I’ve got no recollection of the accident or how it happened – the team is looking into the details to find out more.”

What Happens Now The Racing’s Over? (Esquire)

Rob Smedley: “When I joined the team in April, I did a lot of work to reorganise certain areas of the technical group, so it’s just more of the same really. We have a semblance of what is a decent technical group now and we’re able to exploit what is put in front of us.”

“When was your first big accident in a race car?
VB: I remember very well: it was the first lap of my first go-kart race. I hit the barriers because I didn’t know that you have to brake. But the next time I learned!”

“This is the full brother of the man currently negotiating to bring F1 to Qatar, a figure honoured by Qatar’s Olympic committee as recently as 2013, sentenced to seven years’ imprisonment for terrorism and tweeting messages of support for Osama bin Laden three weeks ago.”

A round-up of bits and bobs (Joe Saward)

“Bahrain is currently negotiating a new deal for 2017 – 2021, so perhaps the sudden appearance of an atmospheric bid from Qatar might be more than meets the eye.”

“Now [Simon] Pagenaud is auctioning the helmet, with all proceeds directed to the Ayrton Senna Institute benefiting children’s literacy in Brazil. The auction site features photos and videos of Pagenaud and the helmet, as well as videos from Helio Castroneves and Tony Kanaan talking about the helmet.”

Yesterday I was a lucky boy. The correct angle of impact saved me. Thanks everybody for your incredible messages and support. #recovering😴

Want to wish my trainer @AnttiVierula good luck for the future! Its been great working with you mate. Enjoy Finland!! #legend #humanweapon

@JeanEricVergne I'm sure this won't be the last time mate 😉 pic.twitter.com/qmBr9zjqHQ

Will Vettel be energised by a change of team after six years at Red Bull and many more on their young driver programme?

The way his facial expression is lit up, it reminds me a lot of the ‘old’ Vettel of 2008-2010 – it’s weird to realise now that he slowly but surely grew a bit… tired? Of the way things were at Red Bull. Not just in 2014, but the above expression was not there for the last two to three years either.

It’s a good thing how he genuinely seems to be impressed by finally getting to be part of the ‘legend’ that is the most decorated team in F1 history, but he’ll need some otherworldly act to get the Prancing Horse back to championships. Even his direct predecessor, arguably the best driver of this era, couldn’t manage it before, so…
@Atticus-2

This time last year mandatory pit stops were rumoured to form part of the new regulations for 2014. F1 Fanatic readers were strongly against it, and happily it did not form part of this year’s rules.