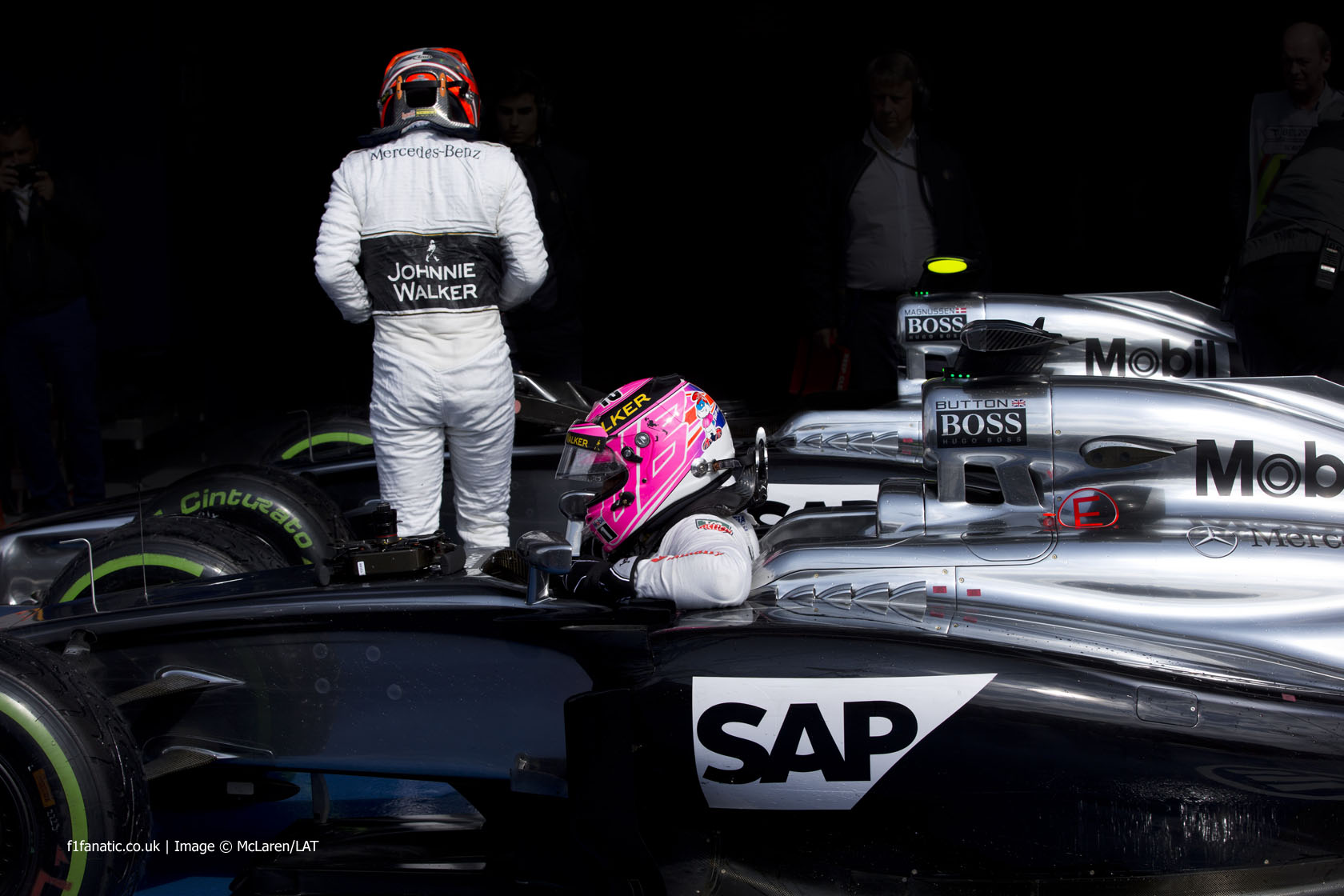 In the round-up: McLaren’s delay in naming their drivers for next year draws criticism.

“There had been hope of an announcement on Friday following a board meeting on Thursday involving Dennis and two other senior shareholders, the Tag co-owner Mansour Ojjeh and Mahmood Hashim Al Kooheji, the chief executive of Mumtalakat, Bahrain’s sovereign wealth fund. Dennis, though, is not prepared to be rushed despite the anger being expressed by many fans over how they feel both drivers have been treated.”

“They’ve invested heavily in Kevin Magnussen. He’s obviously someone for the future, so I think it’s a difficult situation for them.”

Lego turns down offer to sponsor Magnussen (The Copenhagen Post)

“Danish toy giant Lego has turned down an offer to become one of the sponsors of Kevin Magnussen in his attempt to retain his place in the Formula One team McLaren for next season.”

Thanks @aks-das for the tip.

Jean Todt: “I remember in Moto GP there were 16 motorbikes and it was still a good race. It is clear – the action is more at the front than at the back.”

“Do the tyres surprise you? How crucial they are?
Yep! Compared to all the other classes I’ve run before it’s quite tricky!”

“Q: Do you think the penalty points system work?
A: I’m not sure. I think it’s up for discussion really. No one got up towards the 12 points that would lead to a race ban, but I think we’ll need look at it again.”

“Hamilton’s biggest mistake, it seems, was to excuse his initial move from the UK to Switzerland on the grounds of avoiding excessive public and media attention. Better if he had simply said it was a good idea for tax reasons in order to save money for life after F1.”

“When was your first big accident in a race car?
KR: It was with Sauber at a test. One of my first outings in a Formula One Car!”

Treatment of Button bordering on a disgrace (The Telegraph)

“If it is taking the shilly-shallying suits at McLaren this long to decide on a driver line-up, on the future of one of Britain’s most revered and respected sportsman, then it is difficult to see the team returning to competitiveness this century.”

Guys, we hear your feedback and will bring you news of our driver line-up as soon as a decision has been made.

McLaren driver decision must involve something other than drivers. I signed for them week before first race but that was a bad way to start

Really should have seen McLaren delay coming. @eboullier joked in Abu Dhabi announcement would be Boxing Day. Well, I THINK it was a joke…

Well at least McLaren have given us something to talk about…

I get the feeling that McLaren just genuinely don’t know what the best direction to go in is for the second driver.

Button brings experience, consistency and a good level of speed which will all be a benefit for next year given it will likely be difficult as they work with Honda on the new power unit.
Magnussen lacks experience and was a bit inconsistent through this season but he did show that the raw speed is there and with the opportunity to continue in F1 he gain that experience and his consistency will improve and his speed can only get better.

McLaren’s choice is to stick with a known quantity in Button or go with the future potential of Magnussen.

The only real downside I see to either is that by going with Button there possibly going to be in the same situation a year or more down the road and by leaving Magnussen on the sidelines for a year+ he’s not gaining the race experience which will help him improve so that he’s better when/if they do have him back in the car later on. There’s also Vandoorne to consider and again by leaving Magnussen on the sidelines and not gaining that experience and improving how do you know which of the two to go with a year or two from now?

This is one of the downsides to not having a strong midfield/rear of the grid. There’s nowhere for these young drivers to go to gain F1 experience any more as the midfield is starting to fill with pay drivers as the teams are desperate for cash and the rear of the grid doesn’t really exist now that Caterham and Marussia/Manor are seemingly gone.
Stefmeister

FIA president Jean Todt was officially elected to his second term on this day last year.

107 comments on “McLaren criticised over delay in driver decision”