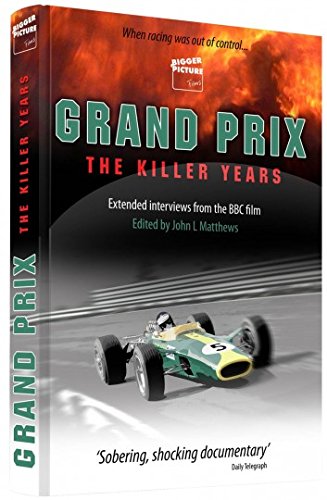 Grand Prix: The Killer Years, a documentary on safety in the early years of the world championship, was broadcast by the BBC in 2011. As mentioned here previously I didn’t think much of it, so my expectations were low for this spin-off book.

My chief problem with The Killer Years was the inappropriateness of the footage they chose to use. If you’re telling a story about the dangers of grand prix racing in the sixties then it is misleading to illustrate it with footage of a crash from the Indianapolis 500, which was run by different people to different rules. Worse, some of the grand prix footage which did appear was used in a tasteless and gratuitous fashion.

But its redeeming feature was a series of revealing interviews involving some of the drivers who survived that era, their partners, and some of the track operators. And as those interviews are the focus of this book, I hoped I might find more to appreciate about it than the documentary.

Although several greats of the sport like Jackie Stewart, Emerson Fittipaldi and John Surtees were interviewed for the documentary, some of the most interesting tales come from the close-knit family of drivers’ partners, such as Nina Rindt and Jacqueline Beltoise.

The circuit operators, who at the time were pinched between the drivers’ growing demands for safer circuits and the huge cost of trying to meet them, also have interesting stories to tell. The account of Ben Huisman, who oversaw a huge rebuilding programme at Zandvoort in the Netherlands only for Roger Williamson to perish at the track in 1973, is particularly frank. Unfortunately much of the rest of the book leaves a lot to be desired. According to the editor, the interviews have largely been left unedited. That much is clear in the lack of narrative flow, the tedious repetitiveness and pointless conversational fragments in too much of the copy.

Much of Jacky Ickx’s interview is bound up with his complaints about the questions he he faced. That being so, it is mystifying why they aren’t included, as it would make it much easier to make sense of his objections.

It would also have helped address one of the other major shortcomings of the book: how short it is. Despite small pages, large text and generous margins it only just creeps past two hundred pages.

Even with the level of discount widely available on books these days, that’s not enough to justify the price – particularly when the text is so repetitive.

Grand Prix: The Killer Years is definitely preferable in book form than as a television documentary – but that really is damning with faint praise. For more on the perils of F1 racing in this era there are many books to recommend before this, such as Robert Daley’s Cars at Speed (reprinted in 2007), Michael Cannell’s The Limit, David Tremayne’s The Lost Generation or Jackie Stewart’s autobiography Winning is Not Enough.