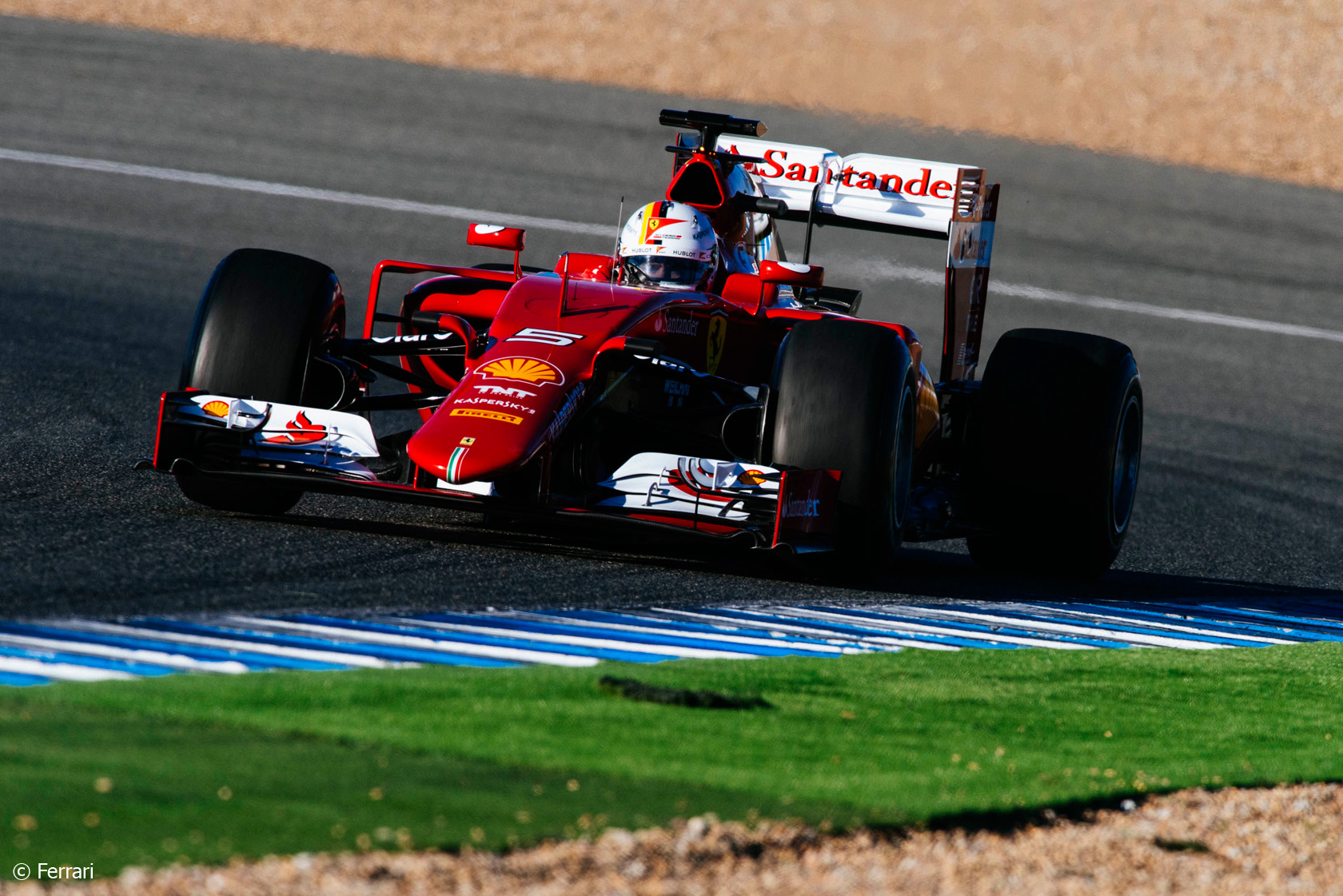 Sebastian Vettel was quickest on the first day of testing for Ferrari but Mercedes impressed by covering almost 700 kilometres with their W06.

In stark contrast to the opening test day of last season, there were few major problems or stoppages suffered by the teams throughout the course of the day.

After the traditional early installation laps, Daniel Ricciardo became the first driver to set a lap time during the 2015 season with a 1’29.141.

There was a brief stoppage early on when Marcus Ericsson spun in the first sector, but the Sauber driver was able to keep the engine running and recover back to the pits and the session was quickly restarted.

It took just over an hour for the fastest time of last year’s Jerez test to be beaten, as Nico Rosberg posted a 1’23.106 during a run in the second hour where he consistently lapped the W06 in the 1’23s.

In the second hour, we saw the first look of Fernando Alonso in the McLaren-Honda MP4-30. The two-time world champion completed a successful installation lap before returning to the garage and only made brief, single-lap appearances during the mid day.

Next it was the turn of Valtteri Bottas to take the new FW37 out in public for the first time. With Lotus announcing that the E23 would not arrive until later in the day, that meant that all seven cars had now taken to the track.

Just like in 2014’s opening test, Rosberg and Mercedes began to ominously log lap after lap in their new car, running comfortably longer and quicker than the opposition.

It wasn’t until after the lunchtime lull that other teams began to push. Vettel’s Ferrari and Bottas’s Williams both rejoined the circuit to put in quick times to get within a second of Rosberg’s benchmark.

With just over three hours remaining in the day, Rosberg had already completed his 100th lap. No other driver had even managed a third of this total by this stage of the day.

Despite running the fewest laps of anyone bar Alonso, Vettel suddenly set the fastest time for Ferrari, becoming the first driver to breach into the 1’22s. Daniel Ricciardo set a purple first sector on the way to setting the third fastest time, before Vettel shaved two tenths off of his fastest time.

Compared to the many headaches teams suffered during the opening day of last season’s testing, there was little disruption to the on-track action. Only with an hour to go did Carlos Sainz Jr bring out the second red flag of the day after his STR10 ground to a halt on the circuit.

When the session restarted, Marcus Ericsson made a surprising jump up to second fastest with a 1’22.777 to be within a tenth of the ultimate pace. In the final half an hour, Vettel then shaved a further half a tenth off his fastest time.