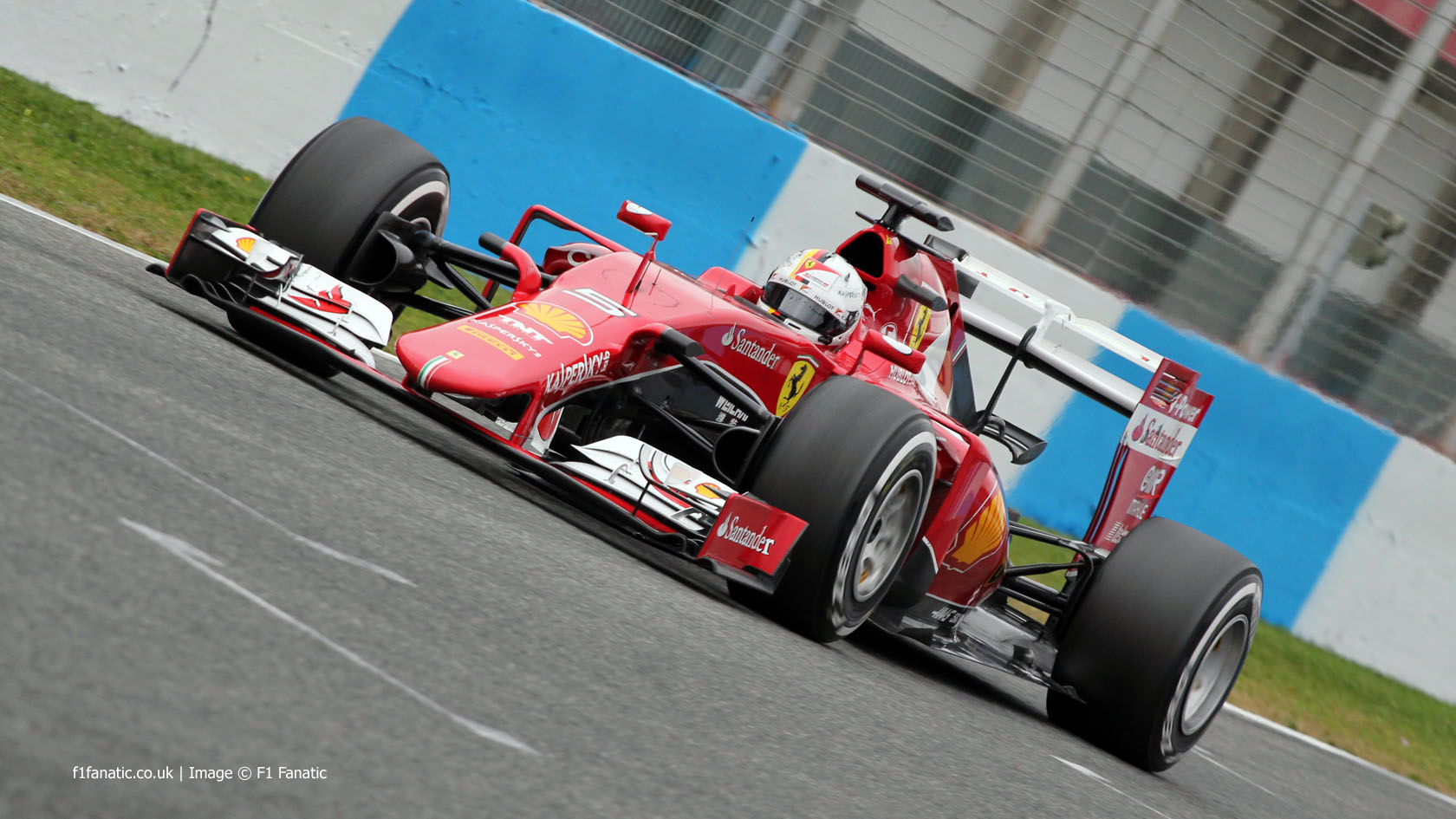 Sebastian Vettel stayed on top for Ferrari in the second day of F1 testing at Jerez.

But Mercedes were unable to replicate the impressive mileage they achieved on day one when a water leak curtailed Lewis Hamilton’s first run in the W06.

The pair wasted no time in getting on the track and up to speed with both drivers quickly logging timed laps. Jenson Button was also out early in the new McLaren-Honda, though he ended up seeing no more running than his team mate had the day before.

Lotus had announced that they were only expecting to run the E23 from day three of the test on Tuesday, but the team surprised many when Pastor Maldonado suddenly rolled out of the garage for the first time in public. The new Lotus would complete 41 laps over the course of the day.

Then Daniil Kvyat provoked even greater surprise when he ventured out to the end of the pitlane without a front wing on the RB11. Christian Horner later confirmed that Kvyat had touched a tyre wall between turns two and three on an installation lap and damaged the front wing, with the team lacking a spare to replace it with for the rest of the day.

Hamilton quickly ran up a healthy number of laps in the Mercedes, but again it was Vettel that set the ultimate pace. A 1’20.984 by the Ferrari driver around midday proved to be the fastest lap of the day.

As the skies darkened and the temperatures dipped in the afternoon, the on-track activity quietened down with it. Vettel took the opportunity to have a short run in the SF15-T in which he gradually dropped for 1’22s down to 1’24s.

Having completed 91 laps, Lewis Hamilton’s running in the afternoon was cut short after Mercedes suffered a water leak. The world champion would end the day fourth fastest.

It was otherwise a relatively quiet and trouble-free afternoon until Maldonado’s brand new Lotus slowed to a crawl in the final sector, bringing about the first and only red flag stoppage of the day.

When the session restarted, Vettel, Nasr and Bottas took the opportunity to post some quick times. Nasr set the second fastest time of the day on Soft tyres with a 1’21.887, while Bottas posted his personal best time of a 1’22.319.

With around an hour to go, rain began to fall around the Jerez circuit and soon the track fell quiet. It looked as though that would be all the running for the day, but Max Verstappen and Felipe Nasr both opted to try out their cars on Intermediate tyres.

The rookies were eventually joined by the Ferrari of Sebastian Vettel and then the McLaren of Button, who made his one and only appearance of the afternoon.

87 comments on “Vettel on top again as Hamilton hits trouble”