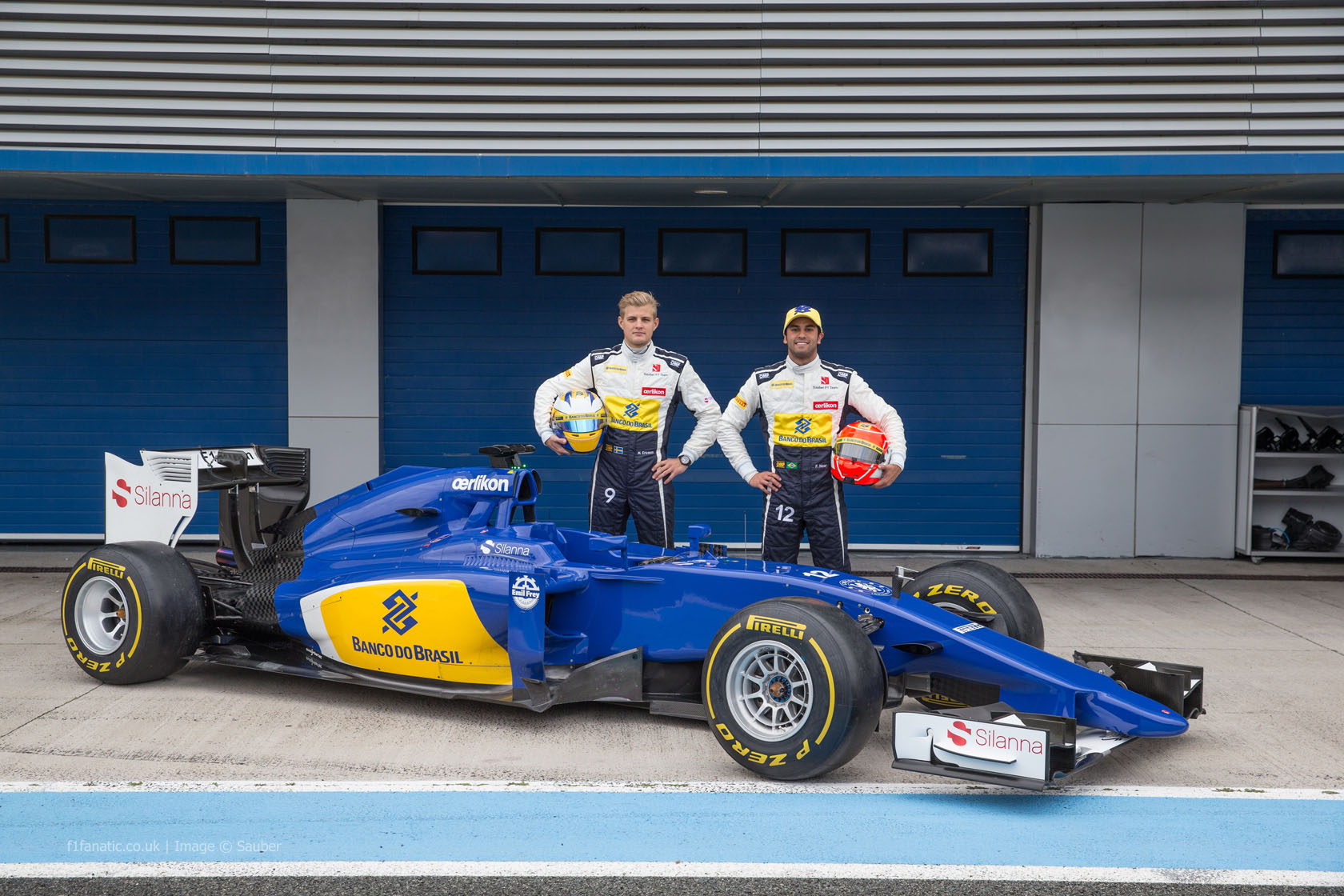 The build-up to a new season is traditionally when teams push out press releases revealing the details of their new ‘promotional partners’, ‘technical suppliers’ and even ‘official tailors’.

Whatever they call them, they all fall under the catch-all term ‘sponsors’. But while many cars have appeared with new logos on their flanks, there’s a troubling amount of bare carbon fibre on F1’s nine different machines. Unsurprisingly several companies wished to be associated with the new world champions. Surely their biggest coup is the acquisition of Hugo Boss, who had been McLaren’s longest-running sponsor in a partnerships dating back 33 years to when Ron Dennis took over the team. The Puma logos are gone from the car.

Also new to Mercedes is Japanese electronics company Epson, who might have been expected to align themselves with McLaren given their new engine deal with Honda. Epson previously sponsored Lotus and Tyrrell when those teams had Honda power (see below).

A further new arrival to Mercedes is Qualcomm, an American company which specialises in wireless products. Qualcomm is also involved in Formula E where its wireless charging technology is being used on one of the course cars.

Swissquote logos have disappeared from the cars and the message of support to Michael Schumacher – ‘#KeepFightingMichael’ – was absent when the car was presented at Jerez. However it later reappeared having been moved from the cockpit sides to the car’s nose. Whether Red Bull’s testing livery is a deliberate attempt to disguise their aerodynamic detail (in which case expect to see more of them) or a rush job because there wasn’t time to paint the RB11 before Jerez, in terms of logos there’s little difference to last year. Exness, a foreign exchange broker company, is the only new sponsor on the car. Having leapt from ninth to third in the constructors’ championship last year Williams has successfully grabbed a few new sponsors, mostly from rivals Lotus.

Unilever’s deodorant brand Rexona (known as Sure in the UK) is a major acquisition, and is Williams’ first sponsor to take the prominent spot on the car’s sidepods since Phillips in 2009. Business technology firm Avanade, a Lotus sponsor until 2013, also has its logos on the FW37.

A further addition is Hackett London, the team’s new clothing partner. Alpinestars supplies its race gear. Williams also extended its partnership with HR firm Randstad at the end of last season, and 2015 marks their tenth year together.

The Banco do Brasil logos have disappeared from the Williams car as former third driver Felipe Nasr has left for Sauber. Experian is also gone from the car. Given that, it’s interesting to note the appearance of Telcel logos on the endplates of the new Ferrari. The America Movil company had previously backed Esteban Gutierrez while he was at Sauber, and having lost his race seat Gutierrez is now a test driver at Ferrari.

Another interesting new arrival on the SF-15T is Alfa Romeo. This was last seen in F1 30 years ago when the company which won the first world championship endured a miserable final season as a constructor.

Alfa Romeo, like Ferrari, is part of Fiat Chrysler Automobiles, although FCA is selling part of its stake in Ferrari. FCA CEO Sergio Marchionne has high hopes for Alfa Romeo, which he wishes to turn into an Italian rival to BMW, which probably explains its elevated presence.

The ‘#ForzaJules’ message in support of the injured Jules Bianchi, part of the Ferrari Driver Academy, does not appear on the new car. It is not on other teams’ cars either. McLaren have added two major brands in media giant CNN International and KPMG, which is one of the ‘big four’ auditors. But note how modest their branding is on the Honda-powered MP4-30.

This is likely a consequence of McLaren chairman Ron Dennis’s refusal to compromise on his team’s rate card, even given their recent lack of success (two winless years and seven seasons without a title) and the weak economy. Meanwhile the likes of Hugo Boss have defected to rivals Mercedes, which must have hurt.

With the team changing engine suppliers, there is now Honda branding where Mercedes logos once were. But there is still no sign of the new title sponsor which was promised two years ago. In terms of names on the car, the new Toro Rosso is virtually the same as last year’s.

The team’s most significant addition is alcohol-free beer brand Estrella Galicia 0,0, whose logo now appears on the drivers’ overalls. Appropriately, one of those drivers is set to become F1’s youngest ever racer. Max Verstappen will be under the legal minimum drinking age in many of the countries he visits this year. There are still a number of logos filling the E23’s livery, but Lotus has several after a very bad season. Rexona has jumped to Williams, Burn and EMAAR are not on this year’s car, and neither are Hisense and Endless, which appeared in late 2014.

Total has gone too, following the team’s switch from Renault power to Mercedes – the latter being one new name on the car. Significantly from a performance point of view, Lotus will use Petronas products as Mercedes do. In terms of sponsors, Sauber have probably had more change than any other team during the winter. Gone are the Mexican sponsors as Gutierrez is no longer part of the team – the three America Movil brands as well as Jose Cuervo and Unifin are no longer on the car. The same goes for 2014’s third driver Giedo van der Garde, who has taken McGregor with him. NEC has also disappeared.

The few remaining sponsors have been joined by those brought by the new drivers. Nasr has got Sauber a big backer in Banco do Brasil, while Silanna has followed Marcus Ericsson from Caterham. The latter company has logos in three spots on the C34, but more interestingly, their logos only appear on Ericsson’s overalls. Many of those missing Sauber logos can now be found on the Force India, who might as well rename themselves Force Mexico. They now boast the only Mexican driver in the field, Sergio Perez, and while their VJM08 is yet to be revealed they showed off an updated livery in Mexico City last month.

Along with an increased presence of Mexican sponsors from America Movil (Claro, Telmex and Telcel brands), Interproteccion and NEC have arrived from Sauber. Lubricants firm Quaker State is another new addition.

Apart from that, the usual Vijay Mallya linked brands remain on the car. The striking colours of Roshfrans are gone, and so is the logo of Kazakhstan foundation Astana which was associated with 2014 third driver Daniel Juncadella.