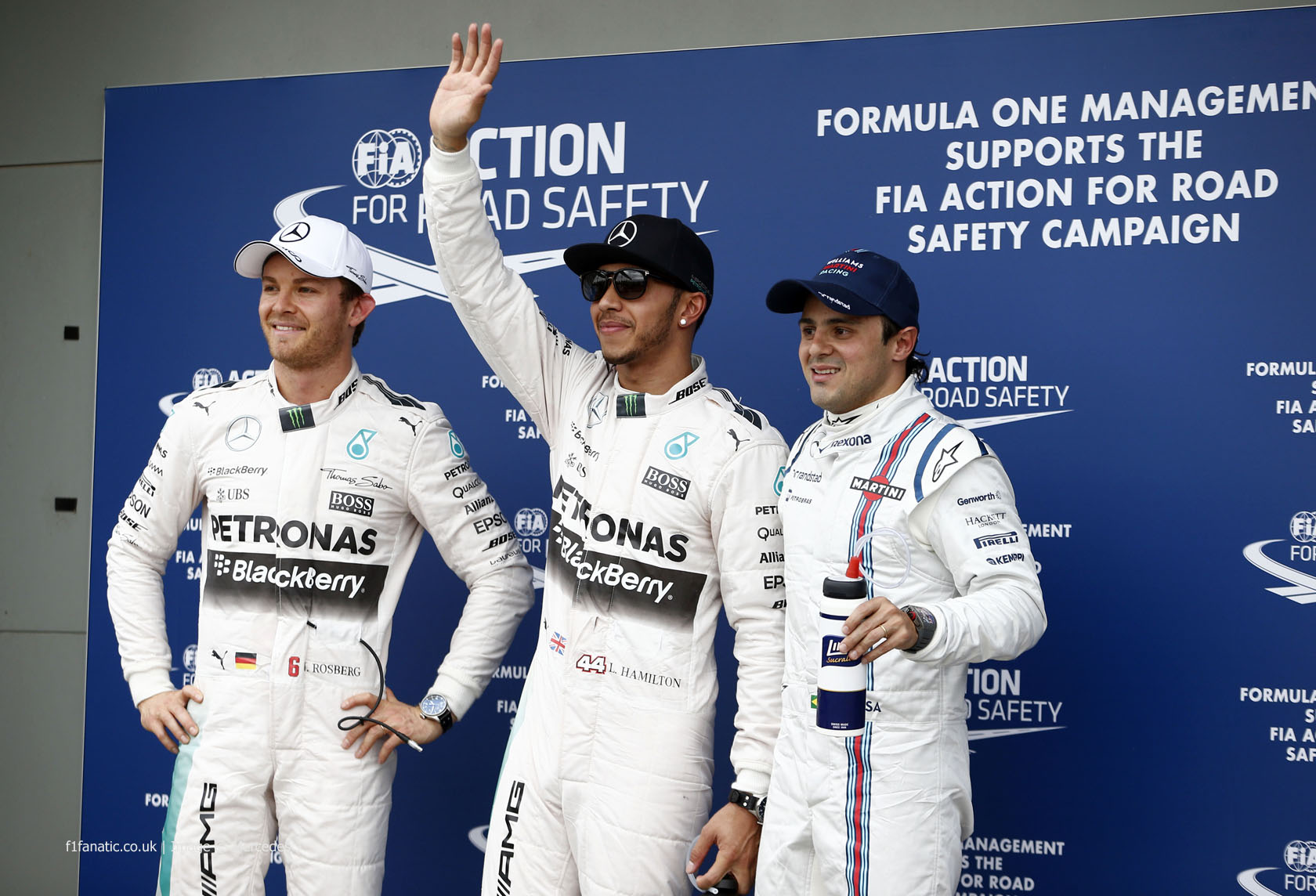 Lewis Hamilton got his championship defence off to the best possible start by claiming pole position for the first race of the season in Australia.

Nico Rosberg was over half a second behind his team mate after a troubled qualifying session, but this was still a dominant performance for Mercedes.

Their closest rivals Williams were well over a second slower, as Felipe Massa narrowly beat the two Ferrari drivers to third place.

The Mercedes pair easily secured their passage through to Q2 and they didn’t even have to use a set of soft tyres to do it. The only other driver to achieve the same was Valtteri Bottas, but Williams team mate Felipe Massa found it necessary to use a set of softs.

Pastor Maldonado languished in the drop zone as the final minutes of Q1 began but the Lotus driver found a substantial improvement on the soft tyres to guarantee a place in Q2. But as he and the Toro Rosso drivers moved forward, McLaren slipper perilously down the order.

Jenson Button managed a cleaner lap than team mate Kevin Magnussen, but it still left him five-hundredths shy of a place in Q2. And then a difficult task became impossible.

The Red Bull of Daniil Kvyat had been struck with a technical problem late in final practice which delayed his start to qualifying. Once he put a time in both McLarens lost another place and were eliminated, along with Marcus Ericsson’s Sauber.

Joining the trio were the two Manor cars, which failed to run at all in Q1 or practice. Hamilton led the way in the second part of qualifying, lowering the fastest time of the weekend so far to a 1’26.894 after switching to the soft tyres. Rosberg was two-tenths of a second slower after feeling his engine cut on the approach to turn 15. The two W06s had the luxury of only having to run once.

After scraping into Q2, Kvyat was unable to get any further in the Red Bull, but the other RB11 in Ricciardo’s hands made it through. The Toro Rossos were split as well – Verstappen owned up to an error at turn five on his flying lap, while Sainz replied “nice one!” when told he’d made it through into Q3.

Having beaten his team mate into Q2 Felipe Nasr took an impressive 11th for Sauber. However the two Force Indias had the distinction of being the only Mercedes-powered cars not to reach the final ten.

Hamilton came out fighting at the beginning of Q3, taking almost half a second off his best time up to that point. Rosberg’s troubles at turn 15 continued, however – he ran wide at the exit and aborted his lap.

Bottas was unable to capitalise on the benefit of having saved a set of soft tyres as he struggled with a lack of bite from his brakes on his first run, and like Rosberg headed back to the pits without setting a time.

Vettel therefore took up second place, albeit over 1.3 seconds slower than Hamilton before the first runs began. And the Mercedes driver stretched his advantage even further with his final run.

While Hamilton lowered his best to a 1’26.327, Rosberg could only try to make up for lost time. He ended up over half a second behind his team mate.

A lairy moment from Bottas limited him to sixth on the grid and allowed Massa to take the ‘best of the rest’ spot, nearly 1.4 seconds slower than Hamilton. The pair were split by the Ferraris, Vettel narrowly out-qualifying Raikkonen.

Ricciardo briefly held third with his final run before being bumped back to seventh. He’ll share row four with Carlos Sainz Jnr, who said he was pleased with his car’s set-up. The Lotus pair finished the top ten.