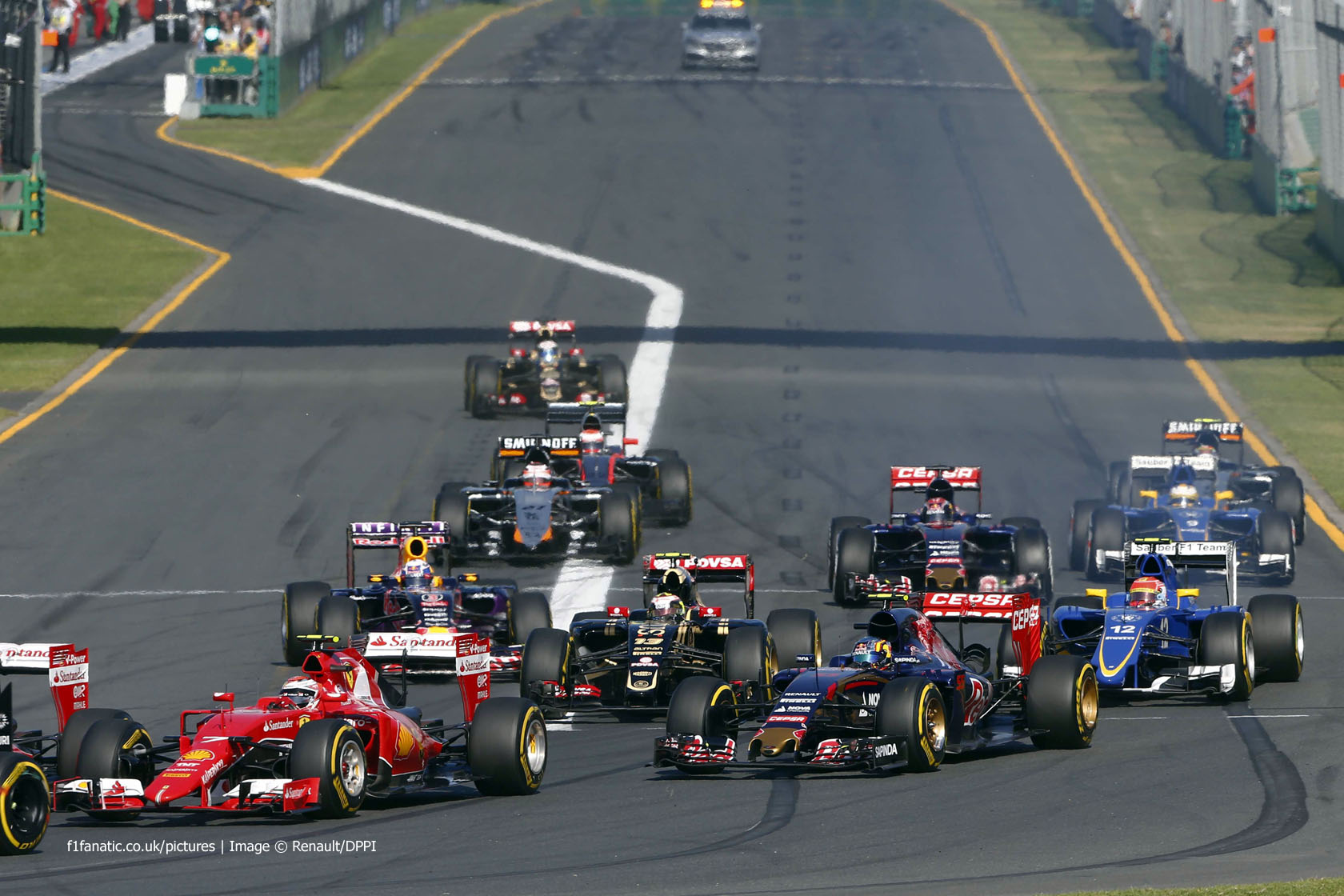 Last week’s Australian Grand Prix wasn’t the lowest-scoring season-opener we’ve seen since Rate the Race began in 2008 – but it wasn’t far off.

Only the 2010 Bahrain Grand Prix received a lower average score from readers. However it’s worth pointing out that season culminated in a tense, four-way fight for the title at the final round.

The 2015 season opener fell short of expectations in many ways with one obvious exception: Lewis Hamilton was first to take the chequered flag, picking up where he left off last year.

Nico Rosberg offered little challenge over the weekend and Mercedes were even more dominant in this race than they were last year. They were left to control the race and were rarely even shown in the coverage.

Reliability was a problem for many teams over the weekend and only 11 cars finished the rather dull race. With so few cars on track and points available for nearly all the finishers there was never going to be a great deal of incentive for battles during the race.

It was a straightforward race in terms of strategy as well: a fairly conservative selection of tyres meant there were few pit stops and little variation between strategies. The race scored an average of only 4.7 out of 10 – one of the worst scores since 2008.

Here are a selection of your comments.

Only 15 cars made it to the grid and a mere 11 finished. The shortage of cars was painfully obvious as the television cameras cycled through the diminished field throughout the race.

This is why F1 needs more cars, the field seemed pretty empty.
@Deongunner

Dreadful. F1 needs to heed the warning of this race. Just 15 cars starting, only two cars which ever had a chance at victory. 11 cars finishing. Good quality teams like Force India and McLaren scrapping over last place. There are no positives to draw from this race. It was a dark day for Formula One.
@Mazdachris

This race was a farce – there is only one race I can remember that was worse which was the six-car race at Indianapolis. Eleven finishers in a relatively tangle-free race with perfect weather is a poor showing. The spectacle is far from what it used to be, the cars sound rubbish. I was ready to call myself an ex-F1 fan near the end of last season. I don’t feel like watching any more races this season.
Turbobacon

The good and the bad Although the race was rated poorly, there were fans that enjoyed it and found some positives. There also seemed to good and bad points about the on screen graphics. Here are a mixture of positive and negative comments from the race.

I scored it highly because there was proper racing between midfield teams, good to see Ferrari and Sauber back and McLaren finishing the race. I won’t mind an 11-car finish due to reliability (most of them suffer at first race so it’s OK). Bring on Malaysia and picture will be even better.
@Vjskang

I feel sorry for the fans, so few cars and so few battles of any genuine interest.

Ecclestone and Todt need to get a grip on this situation. I have watched F1 for four decades and this is the least interest I have had in a season for many many years. I gave my lowest ever score.
@Smudgersmith1

Not much in the way of action but some good drives. Was fun watching Button defend from Perez.
@Neilosjames

Big shout-out to FOM for the progress they have made over the winter. The on-screen graphics look slick and give a much clearer picture of what was happening. In particular, the simple addition of tyre compound in the bar at the bottom of the screen was nice. Also, the social media stuff (Twitter, Youtube, even Instagram) is a big step forwards. If they can sort out the website and the app, they are golden.

Adding to that last point, the CGI they keep forcing on us is horrible. Absolutely horrible. The problem with them is they are so obviously fake – it just keeps grabbing my attention, it’s really distracting. I would prefer it if they just paint a Rolex/Pirelli logo on the grass or tarmac, like they used to do. Oh, and Ecclestone needs to stop with the CGI messages, it’s one of the most decadent things I’ve seen in my entire life.
@Andae23

Did anyone else notice the graphic on the start/finish line at the start of the race? Similar to the crap we saw in (I think) Austria last year. This time a note from Ecclestone to a friend. I am getting quite tired of this but clearly, F1 is all about Ecclestone. It’s just so tacky.
@Ares

It’s not the organisers fault. Putting aside the joy of F1 being back, there were simply not enough cars on the grid ready to race and most of those who made it weren’t up to spec.
This lack of reliability and differences in performance is much worse than the worsening of the engine sound from the normally-aspirated era to the current turbo era.
Felix IR

Talk to me if you want to live It says a lot about the quality of the event that what few positive comments there were concerned the podium ceremony conducted by Arnold Schwarzenegger. Even Hamilton seemed genuinely thrilled by his brush with ‘The Governator’:

To be honest the best performance today was by Arnold Schwarzenegger.
@Major-dev

For me, the only exciting part was Arnie’s podium interview. They didn’t even bother to properly show the Mercedes in the race. Hope Ferrari catches up and we can have fight for first place.
@Mixwell

Awesome interview! Good chosen questions with connection to both F1 as well as the interviewer’s popularity.
@Unitedkingdomracing

Reasons to be cheerful

Will F1 bounce back from a poor start to the season to serve up a season of excitement and intrigue as in 2010? Or was Melbourne the shape of things to come? Here are a few optimistic thoughts from F1 Fanatic readers:

Exciting? No. But nor was last year’s Australian Grand Prix.

But the racing last season really got going after Bahrain (Russia and Monaco aside). I’m not deeply concerned, yet. Besides, can’t really remember a true humdinger barring 2010 at Albert Park. Things should get better!
@Hosty96xd

It was not a stellar race by any means, but was encouraging for the rest of the season for several reasons…

1) Money was not might – Lotus, Toro Rosso and especially Sauber (in race trim) showed excellent levels of performance despite being among the teams most under pressure to make ends meet, whilst Red Bull and McLaren floundered.

2) We can stop naively thinking 2014 was representative of Vettel or Raikkonen’s abilities – The inter-team battle at Ferrari is set to be one of the key points of intrigue of 2015.

3) Terrific teenagers (and Nasr) – The rookies of 2015 all performed excellently, with Nasr especially producing a near fault free run to fifth and in doing so humiliated his more experienced team mate. Pay driver? Who, me?

4) An anonymous glimmer of promise from Rosberg – a lacklustre weekend disguised some excellent early stint pace for Nico on the medium tyre – his primary deficit to Hamilton in races in 2014 – where he was as fast if not faster than Hamilton after Mercedes’ one and only stop.

5) A rejuvenated Ferrari can take the fight to Williams – A messy weekend and the lack of the mechanical grip that hampered Williams at slow speed tracks and in the wet handed a rather easy podium to Vettel, but come Sepang, presuming Williams’ main man is fit, we can expect battle royal for third.

6) McLaren’s hands are clean – The Honda power deficit is giving McLaren a similar deficit to a full ERS failure. In Abu Dhabi this saw Rosberg fall to 14th and lap around four seconds off the pace: since another four seconds would catapult McLaren into podium contention, the MP4-30 chassis does appear an improvement on its predecessors.
@Countrygent