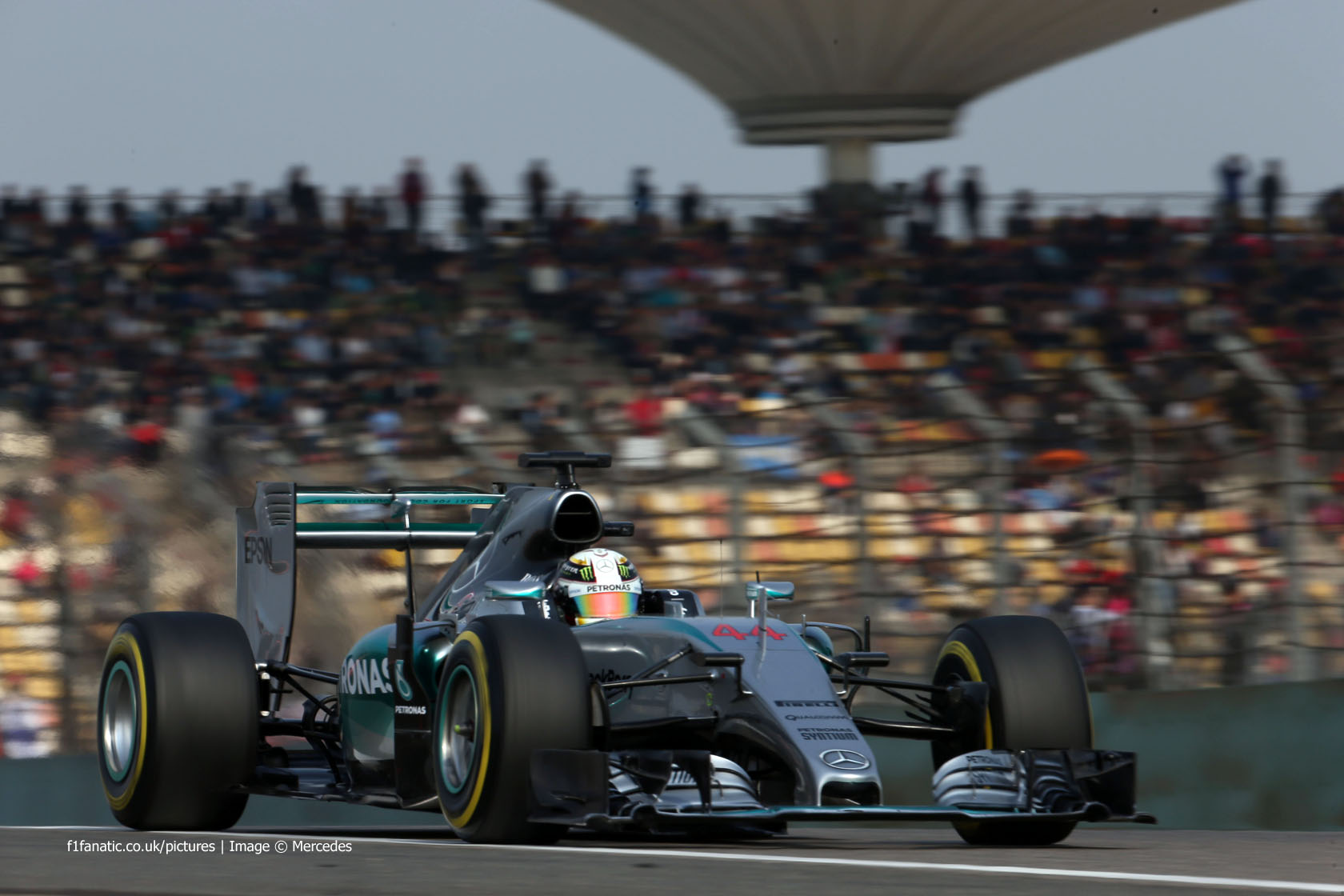 Shanghai is looking increasingly like one of Lewis Hamilton’s strongest venues. Today he took his fifth pole position for the Chinese Grand Prix, adding to the record he already held, and tomorrow he will bid for a record-extending fourth victory.

In every session this weekend Hamilton’s best time has not been bettered by anyone else using the same tyres. Q1 was the only session which did not end with the number 44 car on top, which was because Mercedes was the only team which did not have to use the soft tyres to secure a place in Q2.

All their rivals did so. Sebastian Vettel, who took third on the grid, was half a second slower than the cut-off time in Q1 on medium tyres, so opting for a set of softs was clearly the prudent thing to do instead of trying to find more time on mediums.

However their race pace is Hamilton’s real concern. “The Ferraris are very quick once again here,” he acknowledged, and the Italian team made a key sacrifice in qualifying to strengthen their hand in the race. Ferrari ensured they will have at least one set of unused soft tyres for the race reusing an old set at the beginning of Q3.

Mercedes also has a set of fresh soft tyres available for each of its drivers, but will they actually use them? As we saw in Friday practice Mercedes cannot make the soft compound last as long as Ferrari. Nico Rosberg was sceptical about their usefulness in the race, but Ferrari may use them to try to keep the silver cars in range.

If they can do that, it may only be a matter of time before Mercedes have to reconsider their policy of treating both their drivers as equally as they can, and resort to varying their strategies to cover off any threat from Ferrari. However Kimi Raikkonen was unhappy with his result in Q3. Following his run on used soft tyres he reported he was having trouble with the rear of the car at the beginning of the lap. He chose not to adjust his front wing, but his subsequent single run on new soft tyres left him more than half a second off Vettel.

Raikkonen will therefore line up behind the two Williams drivers, who he beat to fourth in Malaysia despite losing time at the start. The Ferrari’s superior race pace should help him move ahead of the pair during the race even though their straight-line speed is slightly better.

The progress of Daniel Ricciardo in the slowly-improving Red Bull will be another point of interest, as he believes he can stay in touch with the Williams drivers. “Driveability has improved and our long-run pace is better,” he said, “I think we should be closer to Williams tomorrow and I am optimistic we can have a good fight for top five”.

However Red Bull’s brakes remain an area of concern for the team: Daniil Kvyat suffered further problems during practice and both cars had brake trouble in Malaysia.

All the drivers in the top ten will start on the soft tyres they used in Q2. Last year there was very little variation in tyre strategy – just one car used the harder tyres at the start – with the life of the soft tyres being a clear limiting factor.

Shanghai’s uniquely long first corner is preceded by a fairly short run from the grid, so it’s not uncommon to see drivers making contact at the start. The subsequent run to the braking zone at turn six, and the huge straight which leads to the turn 14 hairpin tend to make for a lively first lap. How the contest for victory unfolds from that point on will be shaped by whether Ferrari are able to use the tyres everyone was keen to avoid running last year.