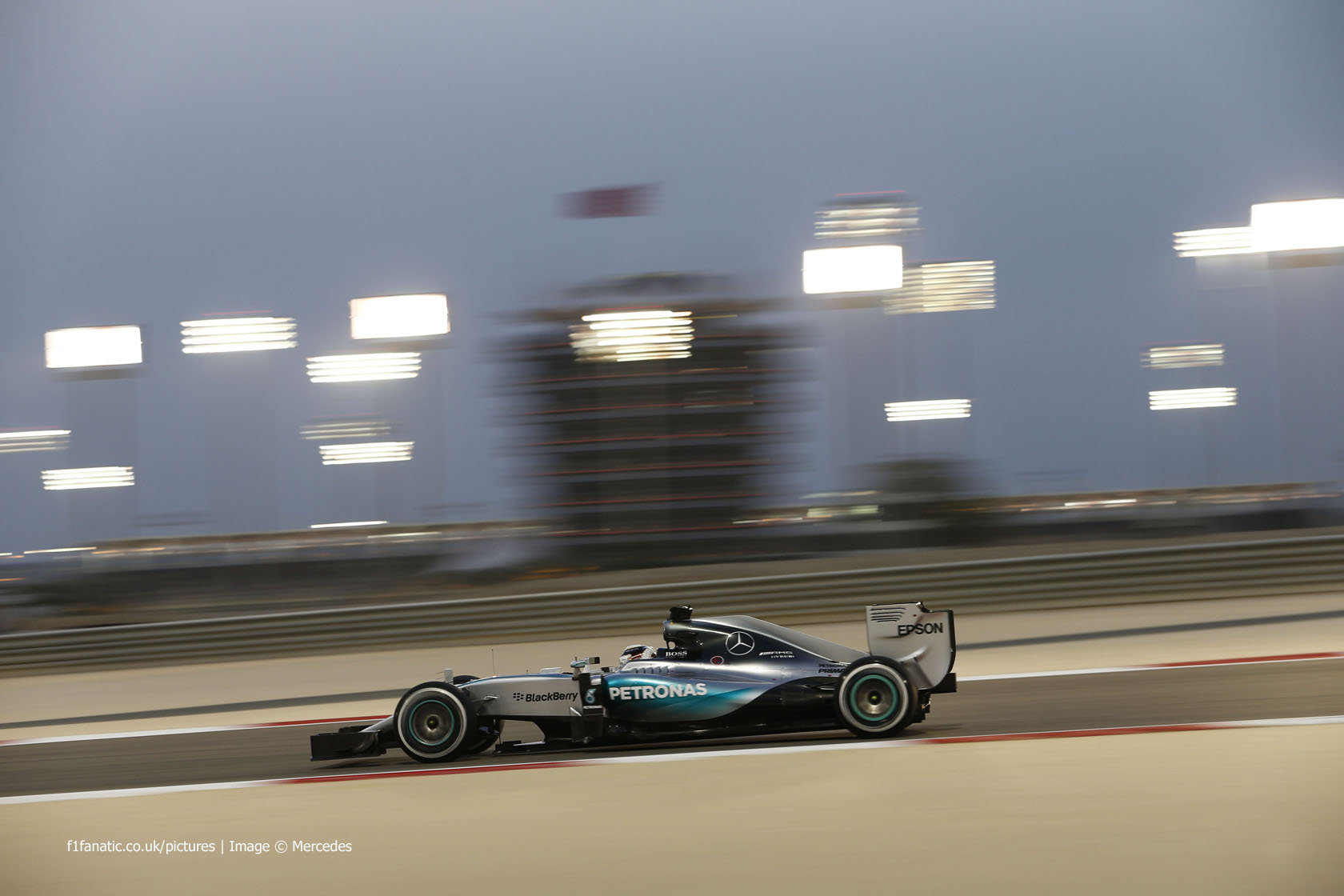 Lewis Hamilton took his third win in four races to extend his championship lead after an enthralling battle of strategy between Mercedes and Ferrari in the Bahrain Grand Prix.

But there was late drama as Kimi Raikkonen snatched second place from Nico Rosberg with two laps remaining after both Mercedes were struck with a brake-by-wire problem in the closing laps.

Before the race even began, Jenson Button’s torrid weekend came to an early end when McLaren discovered yet another problem with Button’s car that the team were unable to fix, meaning he was unable to take the start.

There was even more trouble as the formation lap began when Felipe Massa’s Williams failed to leave his grid slot. Williams recovered the car to the pit lane and were able to get the car restarted by the time the field formed up for the start.

As the lights went out, Hamilton lead away but Rosberg immediately challenged Vettel for second, allowing Raikkonen behind to take third place by driving around the outside of the Mercedes.

It did not take long for Rosberg to begin pressuring Raikkonen and the Mercedes forcefully reclaimed third place with a dive down the inside of the Ferrari into Turn One.

Hamilton begin to open up a small lead at the front, before Vettel too found himself with his mirrors full of Mercedes and Rosberg was able to pass the Ferrari in similar fashion to Raikkonen by squeezing Vettel at the apex of Turn One.

At the first round of stops, Kimi Raikkonen was the only one of the front runners to opt for Medium tyres. Rosberg lost position to Vettel, but was able to repass the Ferrari soon after.

Despite running on the harder tyres, Raikkonen showed remarkable pace and ran consistently quicker than the front three.

As the front three of Hamilton, Rosberg and Vettel stopped for the second and final time, Raikkonen continued into the lead on a long middle stint.

Vettel successfully undercut Rosberg yet again, but when the Ferrari driver came under renewed pressure, Vettel ran wide at the final corner and damaged his front wing, forcing him into an unscheduled stop.

Raikkonen eventually pitted for the final time with 17 laps to go to for a set of Softs to attempt to chase down the Mercedes. The Ferrari driver was able to take seconds out of the Silver Arrow’s lead every lap, eventually closing up to Rosberg with around four laps remaining.

With two laps to go, Rosberg suddenly ran wide and Raikkonen was through into second place. But what looked like an error by Rosberg turned out to be a brake-by-wire problem as Lewis Hamilton reported similar braking issues in the lead.

Luckily for Mercedes, there was not enough laps left for Raikkonen to close the gap at Hamilton ahead and the world champion duly crossed the line to take his third win in four races with Raikkonen and Rosberg rounding out the podium.

After his last extra stop, Vettel easily caught Valtteri Bottas but was unable to take back fourth from the Williams driver.

There was drama for Daniel Ricciardo as the Red Bull’s Renault engine blew up out of the final corner, but the Australian was still able cross the line in sixth.

Romain Grosjean, Sergio Perez, Daniil Kvyat and Felipe Massa rounded out the points, while Fernando Alonso was just 3.9 seconds from scoring McLaren’s first points of the season in 11th.