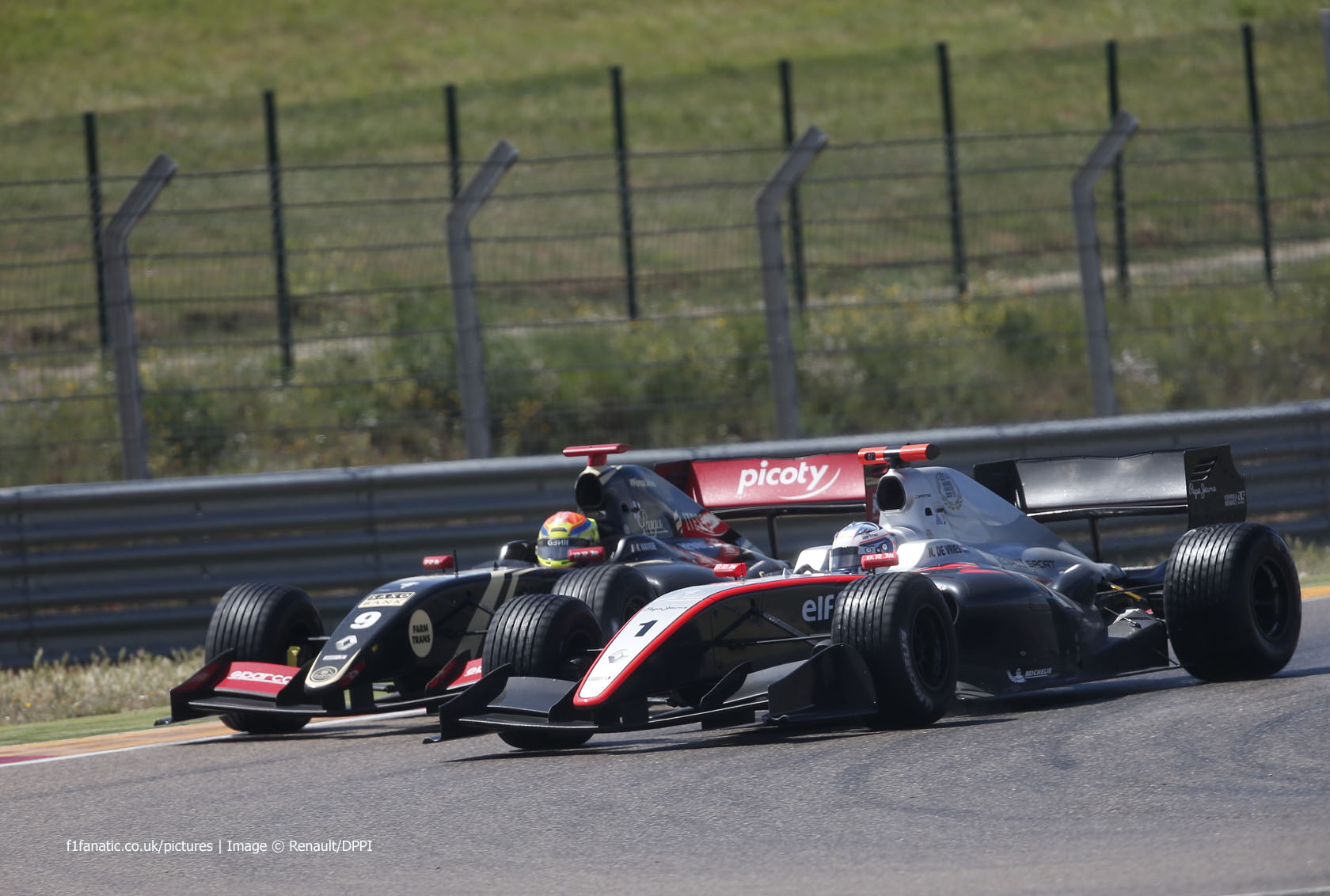 The new Formula Renault 3.5 season kicked off in Spain this weekend where two F1 juniors got well and truly stuck into each other while battling for the lead, resulting in a last lap collision.

In the first race of the Formula Renault 3.5 season at the Motorland Aragon circuit, Oliver Rowland overcame the competition to win with Fortec, while his team mate, Mercedes junior Jazeman Jaafar managed to take second. Meindert van Buuren who took the chequered flag first, but a penalty for a jump start meant Rowland only had to maintain the gap behind to win.

Race two saw plenty of interest for the F1 teams, Lotus junior Matthieu Vaxiviere taking victory with an audacious manoeuvre on McLaren junior Nyck de Vries at the penultimate corner of the last lap, giving the Frenchman his maiden FR3.5 win. Current Manor Marussia driver Roberto Merhi was also in action, failing to finish in race one, before coming back to take 9th in race two. Aurelian Panis, son of one-time Monaco GP winner Olivier, had a best result of 12th place across the two races.

The video above is of race two. To watch race one, head over to the Renault Sport YouTube channel.

Renault’s 2.0-litre Eurocup field also raised the curtain on its season with its first triple-header of races. Louis Deletraz, son of nineties F1 races Jean-Denis, won the opening two races at a canter from pole position.

However rain on Sunday left Deletraz in the middle of the pack for the third race (above) and it was last year series runner-up Dennis Olsen who took the win in deteriorating conditions. Half the race was spent behind the Safety Car, and during an attempted restart the unsighted Martin Kodric ploughed into the second and third-placed cars of Jack Aitken and Ignazio D’Agosto. Fortunately all were uninjured.

Kris Meeke claimed the first WRC event win for a British driver since the late Colin McRae’s victory in the 2002 Safari Rally. It was also Meeke’s first WRC career win, in what proved to be a rally of attrition. Reigning Champion Sebastien Ogier’s run of five straight wins came to an end on the opening day with engine issues, while Thierry Neuville, Andreas Mikkelsen, Dani Sordo, Mads Ostberg – and even eventual winner Meeke – suffered issues on the same day.

The drama and attrition rate continued throughout the weekend until the very end, with Mikkelsen and Neuville crashing out on the final stage. Ostberg finished behind his team mate in second with Elfyn Evans taking his first ever podium in third, having gained the place on the final day after the demise of Jari-Matti Latvala.

Sadly the weekend was marred by an incident on stage nine involved Hyundai driver Hayden Paddon. Neither of the crew were injured but there were multiple spectators involved, six of which were taken to hospital, one of which remains in intensive care.

The above video is highlights of stages 11 and 12, to see other stage highlights, head over to the WRC YouTube channel.

Josef Newgarden became the fourth different winner from four races after winning at Barber Motorsports Park in Alabama ahead of Graham Rahal, who put in a late charge on fresh tyres and a last-lap pass on Scott Dixon.

Helio Castroneves maintained his pole advantage at the start, but dropped back through the field with two pit stop errors. Team mates Will Power, Juan Pablo Montoya and Simon Pagenaud also suffered poor days, although Power salvaged fourth after a drive-through penalty for hitting Takuma Sato while exiting the pits.

Next up for IndyCar is the Indianapolis Grand Prix, using the road course configuration of the famous Indianapolis Motor Speedway.

A rain-delayed Toyota Owners 400 from Richmond International Raceway saw Kurt Busch take the win. In the first half of the race, there was action aplenty with five lead changes, as Busch led the majority, while Kevin Harvick, Brad Keselowski and Joey Logano also spent time at the front during the first three-quarters of the event.

In the final 50 laps, there were a spate of cautions including an incident between Tony Stewart and Dale Earnhardt Jnr. Towards the end, Jeff Gordon, Jamie McMurray, Jimmie Johnson, Keselowski and Harvick were all in the running along with the leading Busch, the later holding on for the final 47 laps to take victory.

Johan Kristoffersson won the opening round of the 2015 World Rallycross Championship from Portugal, ahead of 2014 World Champion and ex-WRC driver Petter Solberg and Timmy Hansen.

Meanwhile Krisztian Szabo took the first Super 1600 victory of the season ahead of Andrea Dubourg and Janis Baumanis.

The video above is from day one. To watch the events of day two, head over to the World Rallycross Championship YouTube channel.

The EuroFormula Open continued at Paul Ricard with two races, and it was Brazilian Vitor Baptista who emerged victorious in race one, with a lights-to-flag win. He took pole in wet conditions before dominating, and he beat Alessio Rovera and Konstantin Tereschenko to the chequered flag.

Tereschenko and Baptista were again at the head of the field in race two, with the Russian grabbing pole position. The first two laps provided great action, with the lead changing hands three times, until a safety car deployment halted the battle. Towards the end of the race, Tereschenko regained the lead, and this time was able to hold it until the end. As a result Tereschenko leads the championship by three points from Baptista. The next round is in Portugal at the Estoril circuit.

The video above is of race two. To watch race one, head over to the EuroFormula Open YouTube channel.

The first round of the 2015 ADAC Formula 4 season too place at Oschersleben with three races. Marvin Dienst won the first two but in his very first weekend in the series, Mick Schumacher – son of seven-time Formula One World Champion Michael – won the third and final race for Van Amersfoort Racing, the same team that ran Toro Rosso driver Max Verstappen in Formula 3 last year.

The action will continue to come thick and fast next weekend. The World Endurance Championship heads to Belgium where Nico Hulkenberg will be racing, and the World Rallycross Championship continues, both with their second rounds. We also have European Formula Three, Auto GP, DTM, WTCC, Australian V8s, and more NASCAR.

Will you be watching any of these races? And what did you watch last weekend? Have your say in the comments.

Thanks to @Mathers for contributing to this article.

17 comments on “Last-lap pass for win in Formula Renault 3.5”