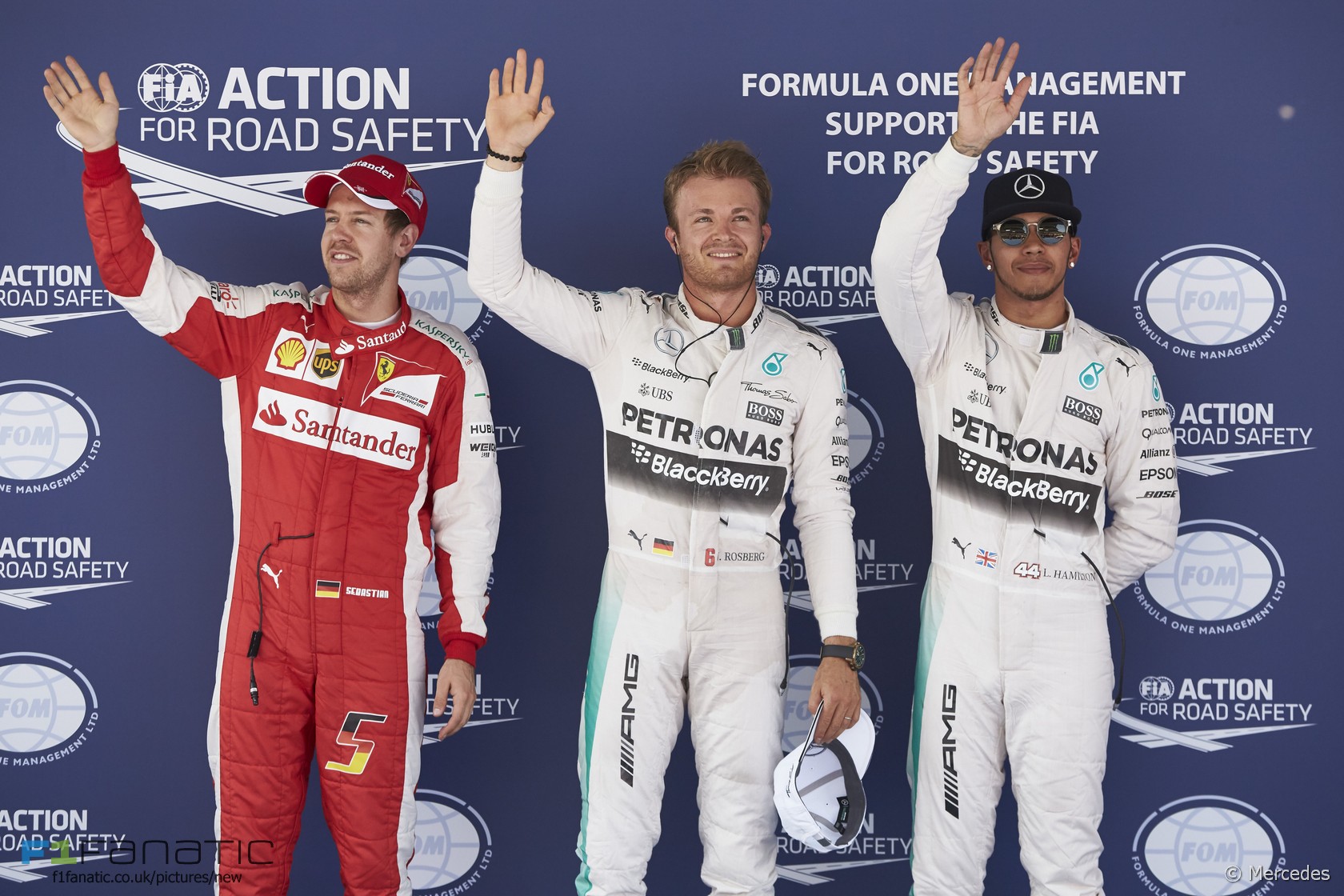 The two Mercedes drivers share the front row of the grid as the challenge from Ferrari faded: Sebastian Vettel was over three-quarters of a second down in third, and Kimi Raikkonen could only manage seventh on the grid.

The surprise of qualifying was the form of the Toro Rossos, who locked out the third row, while McLaren got both their cars through Q1 for the first time this year.

Both Mercedes drivers easily secured their passage to Q2 without having to resort to using the softer medium tyres. Vettel also progressed to the next phase of qualifying using only the hard rubber.

But as in practice Raikkonen was less happy with the balance of his Ferrari. He also found himself in traffic on his first run, which was some seven-tenths of a second slower than Vettel managed, so he resorted to a set of medium tyres to ensure he made it into Q2.

McLaren faced the opposite question and decided not to bother running the hard tyre at all. This paid dividends: both Jenson Button and Fernando Alonso were quick enough on their second runs to out-pace the two Force Indias and Marcus Ericsson’s Sauber, putting both MP4-30s in Q2 for the first time this year.

Nico Hulkenberg reported his tyres had gone off by the latter stages of his lap – the rising temperatures at the Circuit de Catalunya presenting drivers with conditions almost as difficult as those seen in second practice.

A single run at the beginning of Q2 was all the Mercedes and Ferrari drivers needed to get through to Q3. Valtteri Bottas also stayed in the garage while the rest began their final laps, but team mate Felipe Massa did run again, moving up to fourth with his last effort.

There was almost nothing between the two Toro Rosso drivers as they secured passage to Q3 – Max Verstappen beating Carlos Sainz Jnr by just three-hundredths of a second – and once again the pair were ahead of both the Red Bulls.

McLaren progressed no further, and both Lotus drivers moved ahead of them with their final efforts, though all four were eliminated.

Romain Grosjean was clearly unhappy at failing to reach Q3 for the first time this year, complaining about a loss of front grip on his lap. His race engineer was less concerned, however, pointing out they would be better off starting from eleventh on fresh tyres than from tenth on used rubber. Rosberg drew first blood in the pole position shoot-out: Hamilton was first across the line, but his team mate had over a quarter of a second in hand after their first runs on new tyres. Only two other drivers had that luxury: Bottas had a scruffy lap leaving Vettel a comfortable third. Raikkonen, running used tyres, was a distant fifth.

Raikkonen wasn’t able to overhaul Bottas with his last run on the new tyres, and his disappointment was compounded by the two Toro Rosso drivers, who claimed the third row and bumped him back to seventh. Massa was also stung by the flying STR10s, ending up ninth between the Red Bulls.

But the battle for pole position ended somewhat anticlimactically, as neither Hamilton nor Rosberg were able to improve on their final runs. That won’t have bothered Rosberg, however, as he halted Hamilton’s run of pole positions at a track where overtaking is still regarded as being difficult.