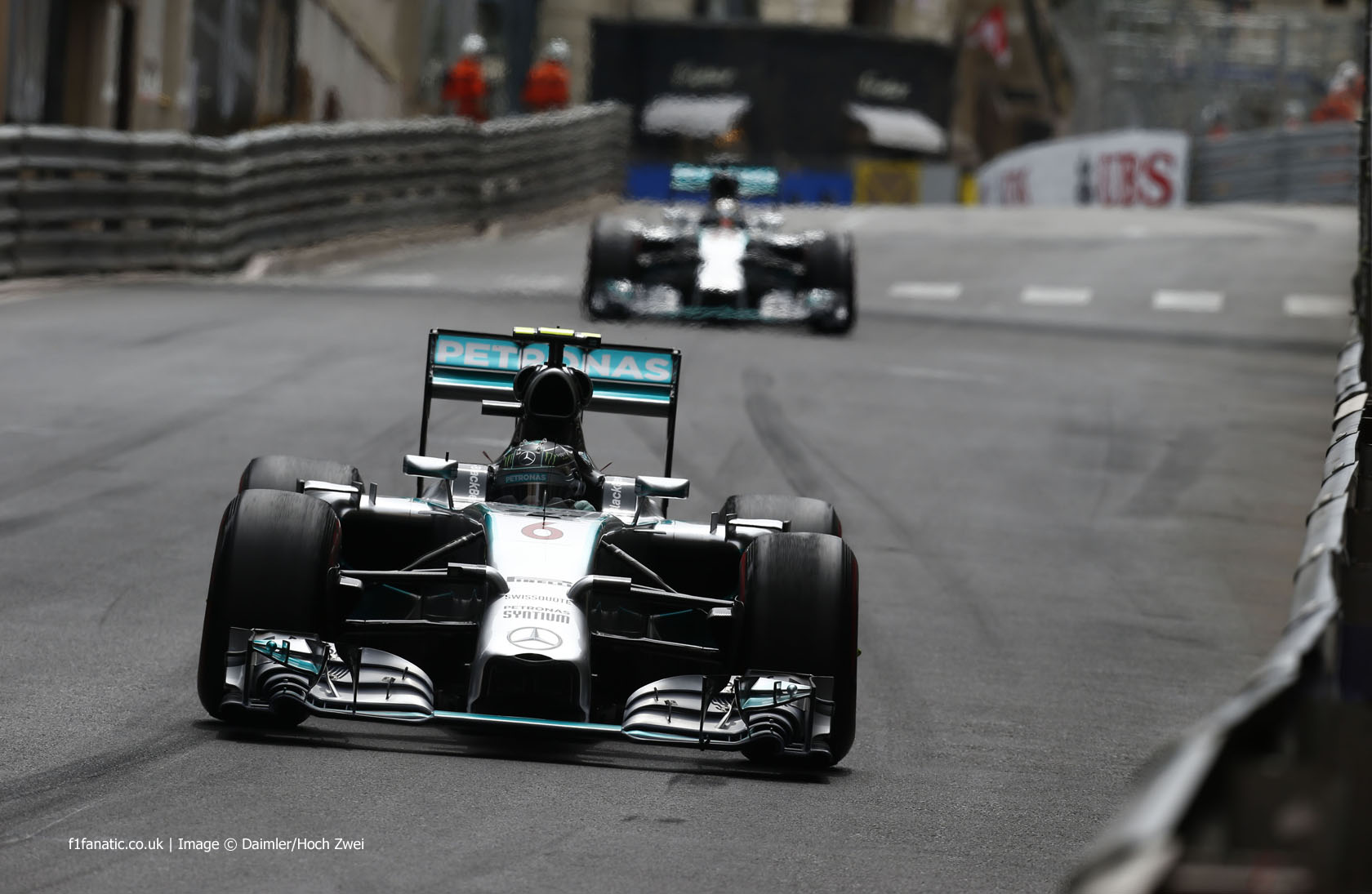 The Monaco Grand Prix qualifying session is one of the most important of the year – and 12 months ago it was the scene of one of last season’s biggest controversies.

Lewis Hamilton was not amused when he was forced to abort his final flying lap ater team mate Nico Rosberg went off the track in front of him, bringing out the yellow flags. This was suspiciously convenient for Rosberg, as he had the fastest lap at the time and did not look likely to improve on his final run.

Rosberg kept his pole position following a stewards investigation, which ruled they “no evidence of any offence” could be found. But should F1’s rules go further to prevent drivers benefiting from their mistakes – whether accidental or intentional – in this way?

IndyCar uses a similar knockout qualifying session to F1 on the road and street courses which form the majority of its calendar. Its rules can be used to stop drivers from gaining an advantage in qualifying if they indirectly compromise another driver – regardless of whether they are deemed to have done so intentionally:

8.3.5 If a car causes a red condition [flag] in any segment or otherwise interferes with qualifications as determined by IndyCar, the car’s best two timed laps of the segment shall be disallowed.

8.3.6 If a car causes two red conditions in one or more segments or otherwise interferes with qualifications as determined by IndyCar, all segment times shall be voided, and the car shall not be permitted to participate in the remainder of qualifying.

8.3.7 If a car interferes with the qualifications attempt of another car, as determined by IndyCar:

8.3.7.1 If the violation occurs during segment one or segment two, the car’s best two timed laps during that segment shall be disallowed, and the car shall not advance to the next segment.

8.3.7.2 If the violation occurs during segment three, all segment three times shall be voided and the car shall not be permitted to participate in the reminder of qualifying.

IndyCar’s rules mean a driver in Rosberg’s situation last year would have no incentive to go off the track intentionally in an effort to disrupt his team mate: They would know that to do so would lead to them losing their best lap times or even being sent to the back of the grid.

Should F1 consider having a similar rule?

The narrow confines of Monaco – as well as new circuits like Singapore and, next year, Baku – present an invitation for drivers to manipulate things. There have been similar examples in the past – Michael Schumacher parking at Rascasse in 2006 and Nelson Piquet Jnr crashing to bring out the Safety Car for Fernando Alonso two years later.

It would only take a small addition to the rule book to take away this incentive and remove a potential point of controversy.

The Formula One rule book is tortuously complicated as it is. It does not need a further addition designed to prevent a scenario which does not occur very often anyway.

It would also be unfair to penalise a driver who made an honest mistake by removing their lap times. Having the threat of a penalty for making is mistake would lead drivers to take fewer risks in qualifying, making for less compelling on-track action. F1 already penalises drivers for directly impeding rivals during qualifying, whether or not they do so intentionally. The question here is whether a similar rule should also be applied to drivers who delay their rivals indirectly.

In 2006 and 2014 at Monaco the stewards had to rule on whether or not the driver in question made a genuine mistake or deliberately tried to engineer a yellow flag situation. This is a difficult call to make even with all the video angles and telemetry available today.

In some circumstances the current rules clearly give drivers an inducement to try the kind of stunt Schumacher was found guilty of in 2006, and which some believe Rosberg got away with last year. Adopting a version of IndyCar’s rule would fix that.

Yes, it would be hard on a driver who made a mistake to pay for it by losing one of their quickest lap times. But I don’t have a problem with that. This is supposed to be the pinnacle of motor racing; it’s not meant to be easy.

Should F1 try to stop drivers from benefiting from causing a yellow flag during qualifying? Cast your vote below and have your say in the comments.

Should F1 introduce a rule to prevent drivers gaining an advantage from indirectly spoiling a rival's qualifying lap?

127 comments on “Could a new rule stop another Monaco qualifying row?”