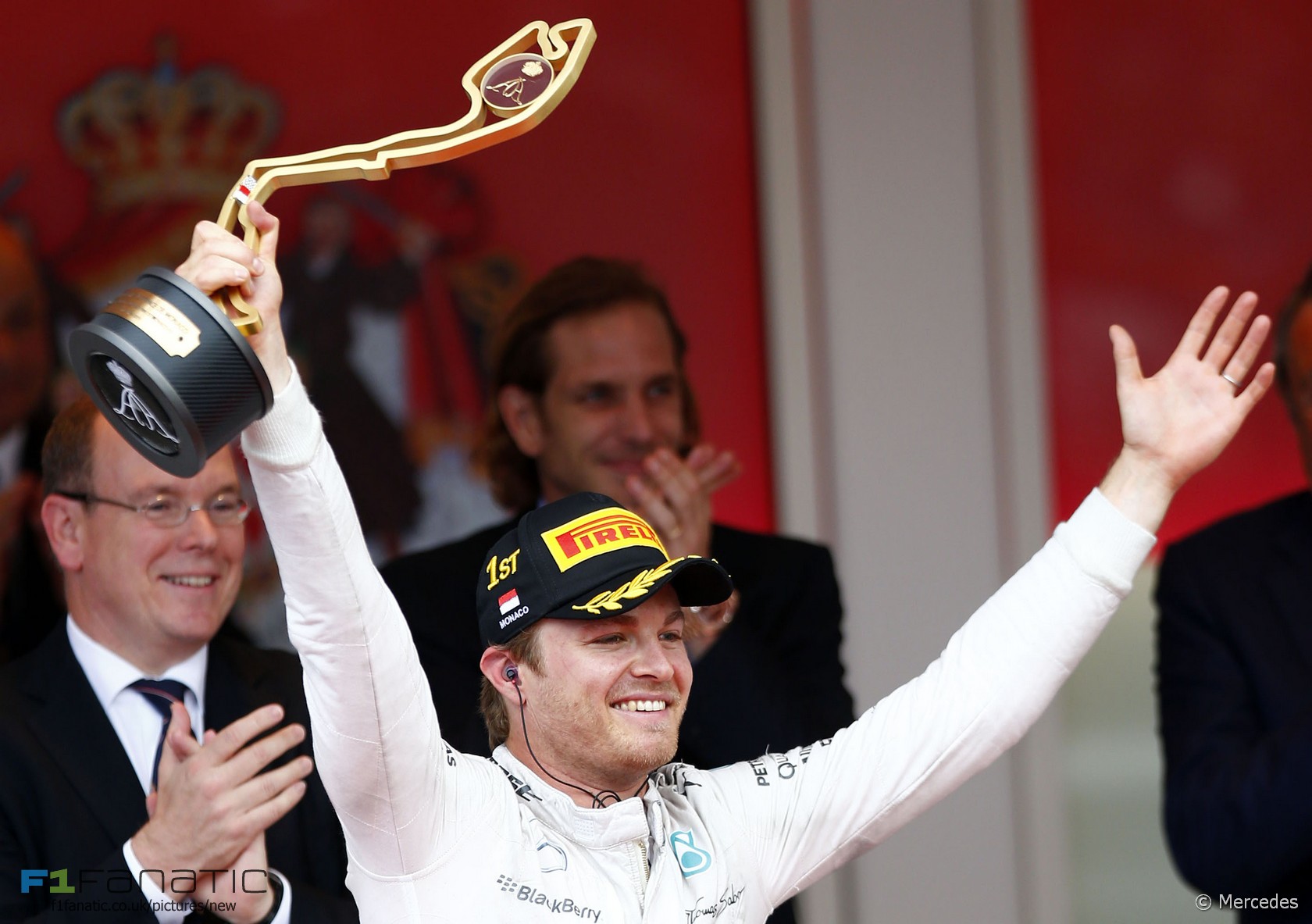 With 15 laps to go, Lewis Hamilton would have been forgiven for thinking he had the Monaco Grand Prix bought and paid for.

Any semblance of threat from his team mate Nico Rosberg had long since receded. The other Mercedes was preoccupied with the challenging Ferrari of Sebastian Vettel.

With Rosberg 19.2 seconds in arrears at the end of lap 63, Hamilton could back off to the tune of a second per lap and still cruise home to victory. But a violent crash at Sainte Devote and a hasty reaction on the Mercedes pit wall was about to put paid to that. An hour and a half earlier, Hamilton had shown his pursuers a clean pair of heels when the red lights went out. Sebastian Vettel dived to the inside of Rosberg but the Mercedes carried enough momentum around the outside to stay ahead, despite a surface made slippery by the cement dust used to clean up a support race crash.

Kvyat came within millimetres of creaming into the back of Vettel’s car as the Ferrari swerved around, but despite locking his front tyres he squeezed ahead of Daniel Ricciardo to take fourth place.

At Mirabeau, for the second year in a row on lap one, a McLaren knocked a Force India into a barrier. This time the culprit was aFernando Alonso and the victim was Nico Hulkenberg. The latter continued after stopping for a new front wing, while Alonso was handled a five-second time penalty. Hulkenberg had already tangled with Felipe Massa at turn one, and the Williams driver arrived in the pits with him for attention at the end of the first lap.

Hamilton kept his lead at the usual two-seconds-plus mark at first. But as the leaders hit traffic he began to stretch his lead over Rosberg to more than four seconds.

As they began to work their with past quicker cars Rosberg found it increasingly difficult to keep up. In the course of four laps his deficit doubled to more than nine laps as he worked his way past the delayed Hulkenberg, pit lane starter Carlos Sainz Jnr and Marcus Ericsson’s Sauber.

The good news for Rosberg was that Hamilton was now so far ahead Mercedes could give him a more optimal strategy in order to keep Vettel behind. The Ferrari driver eventually came in on lap 36, and despite a rapid out-lap Rosberg held his position after coming in the next time by.

Hamilton joined them in switching from the super-soft to the soft tyres on the 38th lap – one shy of half-distance – and from then on he drew away from Rosberg at an even greater rate. The 2008 Monaco Grand Prix winner looked like he was on his way to a second victory. On Thursday morning Max Verstappen had delivered a headline-grabbing performance by lapping little more than a second off Hamilton’s pace on his first ever laps of the demanding Monte-Carlo course. His race had started well, too – he had passed Pastor Maldonado’s slowing Lotus, though not without knocking off part of his front wing.

But it all started to go wrong when he headed for the pits on lap 29. His right-rear wheel stuck, over 25 seconds were lost, and with that his chance of a points finish seemed to have gone.

Needing to make up ground, his team soon brought him back in for a switch back to super-soft tyres. Having fallen off the lead lap, he was now able to follow the leaders and use them to pass other cars which were being lapped. He did this to brilliant effect on lap 55, using Vettel to squeeze past Valtteri Bottas on the approach to Portier.

Romain Grosjean was alert to the threat, however, and made sure there was no room for Verstappen when the Ferrari came past him. But Verstappen, who’s caught the Lotus at around a second and a half per lap, looked capable of producing a pass without assistance.

It all went disastrously wrong on lap 64. Verstappen said afterwards he was not trying to put a pass on Grosjean at the time, and that the Lotus driver braked earlier than he expected for Sainte Devote. As the Lotus slowed for the first corner Verstappen dodged right and came very close to avoiding contact – but not close enough.

The impact tore the front-left wheel off the Toro Rosso, sending Verstappen on a terrifying toboggan ride into the conveyor belt at Sainte Devote. Astonishingly the Lotus was able to keep moving. “I turned around,” said Grosjean, “which established all four wheels were there, then looked in the mirrors to see if the rear wing was still there too, then got on with my race”.

The race, however, had been neutralised. A new Virtual Safety Car period was originally invoked, but shortly afterwards it was replaced by its real-world equivalent. This contributed to Hamilton’s undoing.

From inspecting the timing monitors Mercedes believed they could get their lead car in and out of the pits without losing their advantage. They couldn’t. From watching the view screens around the track Hamilton had guessed that Rosberg and Vettel had taken the opportunity to make an extra pit stop for super-soft tyres. They hadn’t. “We didn’t discuss pitting in the end,” Rosberg confirmed afterwards.

But in came Hamilton at the end of lap 65, having lost several extra seconds due to catching the Safety Car. Rosberg had not been disadvantaged in this way, and motored past Hamilton as the former leader left the pits.

This could have presented Mercedes with a McLaren-in-Australia-1998-style dilemma – would they have told Rosberg to let his team mate by as he’d pitted in error? But Hamilton was also passed by Vettel, the pair motoring up Beau Rivage side-by-side before the Ferrari assumed second place. “I’ve lost this race, haven’t I?” Hamilton lamented. Race control wasted several of the few remaining racing laps by needlessly sending the lapped cars past the Safety Car again. When the race finally resumed at the end of lap 70, Rosberg slowed the field sharply at Rascasse. “It was quite treacherous out there with those hard tyres because they were really stone cold,” he said.

“They were telling me the temperatures, we’ve never ever had those temperatures before I think in those tyres.” But Hamilton’s softer, fresher tyres were not enough to bring him within striking range of Vettel.

One driver behind him was able to gain a place. Ricciardo pounded on a momentary mistake by Raikkonen at the exit of Casino and went for the inside at Mirabeau. Raikkonen saw him coming too late and began to squeeze the Red Bull after Ricciardo drew alongside. The pair made contact, and Ricciardo squeezed past, leaving Raikkonen thoroughly unimpressed.

Red Bull then arranged a neat and scrupulously fair piece of teamwork. Kvyat was instructed to wave Ricciardo past so that his team mate on fresher tyres could attack Hamilton. That plan came to naught, so on the final lap the drivers were told to switch positions back again. Again the pair obeyed – the team has come a long way since its Webber and Vettel days.

Sergio Perez completed an untroubled run to seventh for Force India. Jenson Button put McLaren’s first points of 2015 on the board with eighth, though it was another bittersweet day for the team as Fernando Alonso’s car broke down again. Felipe Nasr was back among the points scorers for Sauber and Sainz capped an excellent recovery run from his pit lane start by taking the final point.

‘Lewis was better this weekend’ A surprised Rosberg therefore inherited his third consecutive victory on the streets of Monaco. Hamilton, who began the weekend by announcing a new three-year deal to remain with Mercedes, showed commendable restraint as he batted away questions about whether his faith in their strategists had been wrecked.

While Rosberg has closed to within ten points of Hamilton in the drivers’ championship he was under no illusions about the manner in which his victory had come.

“Until the safety car Lewis had done a perfect job,” Rosberg admitted, “he was better than me over the weekend, so he definitely deserved the win.”

“I know how horrible he must feel now. This weekend was a warning for me that I have to work even harder for the next race.”